European powers on Friday lined up to condemn a tearful interview shown on Belarusian state television with a dissident journalist who was arrested after his plane was diverted to Minsk, saying he was only speaking “under duress”.

Germany condemned the interview with Roman Protasevich as a “disgrace”, while British Foreign Secretary Dominic Raab said it was “disturbing”.

Really uncomfortable to watch this. A battered Roman Protasevich appears on Belarusian state TV to praise autocrat Aleksandr Lukashenko, 10 days after the dissident blogger was taken off the Ryanair flight that was forced to land in Minsk. A volte-face that’s very hard to believe pic.twitter.com/escJriEtfX

Speaking during a visit to Warsaw, Belarusian opposition leader Svetlana Tikhanovskaya said: “All such videos are shot under pressure.”

“We should not believe any of the words of these people, including Roman Protasevich,” said Tikhanovskaya, who ran against Belarusian strongman Alexander Lukashenko in an election last year.

“They are done after torture,” she said.

Mr Protasevich was arrested on 23 May along with his girlfriend Sofia Sapega when their Ryanair flight from Athens to Vilnius was diverted, intercepted by a Belarusian fighter jet and made to land.

The interview with Mr Protasevich, the co-founder and former editor of opposition Telegram channel Nexta which galvanised anti-government demonstrations, was broadcast on Thursday.

Looking uncomfortable in the video, Mr Protasevich said he had called for protests last year and praised Mr Lukashenko.

Marie Struthers, Amnesty International’s Eastern Europe and Central Asia director, said in a statement that Mr Protasevich had “visible wounds” on his wrists.

She said the interview showed Protasevich to be “under intolerable psychological pressure” and constituted “ill-treatment”.

“It was a televised coercion,” she said.

At the end of the 1.5-hour interview broadcast by Belarus state-run channel ONT Thursday evening, Mr Protasevich began crying and covered his face with his hands.

The 26-year-old’s father, Dmitry Protasevich, told AFP on Thursday that the video was the result of “abuse, torture and threats”.

“I know my son very well and I believe that he would never say such things,” he told AFP.

“They broke him and forced him to say what was needed,” he said. 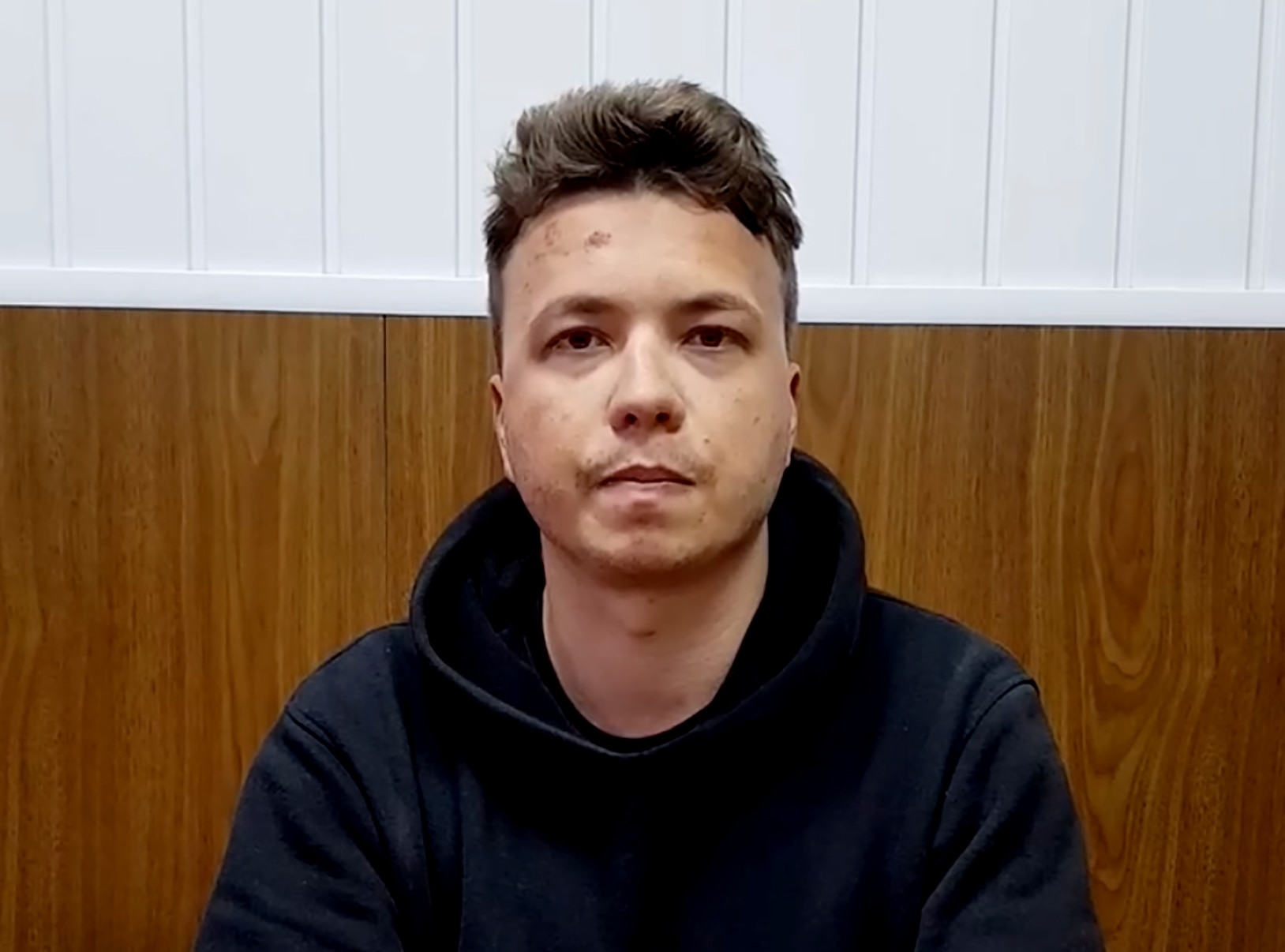 Roman Protasevich is seen during his first statement to the security forces in Minsk on 25 May 2021.

Belarusian authorities accuse Mr Protasevich of organising mass riots, a charge that could land him in prison for 15 years.

“I don’t even want to look into this, this has nothing to do with us,” he said, speaking on Friday at the Saint Petersburg International Economic Forum.

Mr Putin also said he did not know who Mr Protasevich was.

“I don’t know him and don’t want to know him, let him do whatever he wants,” he said.

Mr Protasevich was “clearly under duress” in the interview, Mr Raab said on Twitter.

“Those involved in the filming, coercion and direction of the interview must be held accountable,” he added.

The persecution of those defending human rights and media freedom in Belarus must stop. Those involved in the filming, coercion and direction of the interview must be held accountable

He accused Belarusian authorities of “mentally and possibly physically” pressuring him to speak.

“That is a disgrace for the broadcaster showing (the interview) and for the Belarusian leadership which is once again showing its contempt for democracy and, it must be said, for humanity,” Mr Seibert said.

In response to the protests, Belarus authorities waged a brutal crackdown on the opposition and civil society, detaining and imprisoning thousands of demonstrators and pushing opposition leaders into exile.

Several people died in the unrest.

Immediately after their arrest, both Mr Protasevich and Ms Sapega appeared in “confession” videos that their supporters said were also recorded under duress and are a common tactic of the regime to pressure critics.

Mr Protasevich’s parents said at the time their son looked like he had been beaten in the video.

In response to the arrests, the European Union banned Belarusian state carrier Belavia from operating flights to airports in the bloc and discouraged EU-based airlines from flying over the ex-Soviet country.

But the International Air Transport Association (IATA), a leading airline association, on Friday criticised the EU ban on flying in Belarusian airspace, saying that aviation “must not suffer from political interference”.

“Two wrongs do not make a right. Politics should never interfere with the safe operation of aircraft and politicians should never use aviation safety as a cover to pursue political or diplomatic agendas,” IATA chief Willie Walsh said in a statement.