Sleeping rough on Sydney’s streets, 60-year-old Rob has feared for the last year that COVID-19 would infiltrate the city’s homeless population.

If it does, it will be hard to trace, he says.

“You see different people all the time so I don’t know how you’d ever be able to keep track of someone,” he told SBS News. “I guess the risk is pretty high.”

There’s also a lot of anxiety surrounding healthcare institutions and the vaccine itself; many rough sleepers only have their phone and social media to access news, so not all public health messages get through.

Rob doesn’t want to take any chances. He’s rolled up his sleeve at a mobile vaccine clinic in St Martin’s Place in the heart of the city.

“It’s an obligation on all of us to do something to try and stem the tide and it just seemed like a convenient location to get it done,” he said.

“It just seemed like the right thing to do.”

The mobile vaccine clinics are being run by the Kirketon Road Centre medical clinic in Darlinghurst, and homelessness charity Wayside Chapel, whose teams travel around the city trying to ensure as many rough sleepers as possible have access to the COVID-19 vaccine.

Homeless populations are particularly vulnerable to the virus, with many rough sleepers suffering already-complex health issues.

If they catch it, many are unable to properly isolate and contacts and movements can be hard to trace.

At the last census, 116,000 people in Australia were thought to be homeless. Around 44 per cent of those were living in crowded dwellings, 18 per cent were in supported accommodation and 7 per cent were sleeping rough.

During a recent count in February, City of Sydney council found 272 people sleeping on the street.

Wayside Chapel outreach worker Joshua Chamberlin says the charity has been using its community outreach service to talk about virus prevention and hand out information on the vaccine.

“It’s quite an open conversation, I think, at the moment. People are willing to listen which is nice,” Mr Chamberlain said. “But as with anything, there’s usually some hesitancy.”

Many rough sleepers have negative experiences of institutions, particularly if they’re dealing with trauma, and some find it hard to access services. Fellow outreach worker Dennis Antoniou says the outreach program in partnership with Kirketon Road has worked because the Wayside staff make the service more accessible.

“People can’t always make it to services themselves. Sometimes it takes that consistency of a familiar face to approach them,” Mr Antoniou said.

With both vaccines administered in Australia requiring two doses, the consistent presence of the mobile clinic helps rough sleepers coordinate their second shot.

The Wayside Chapel’s Pastor and CEO Jon Owen said the outreach program has been “a great public health campaign”.

“Many people who are on the streets, their only news source is their phones and that can be Facebook videos or TikTok videos that are good or bad but not necessarily backed by science,” he said. 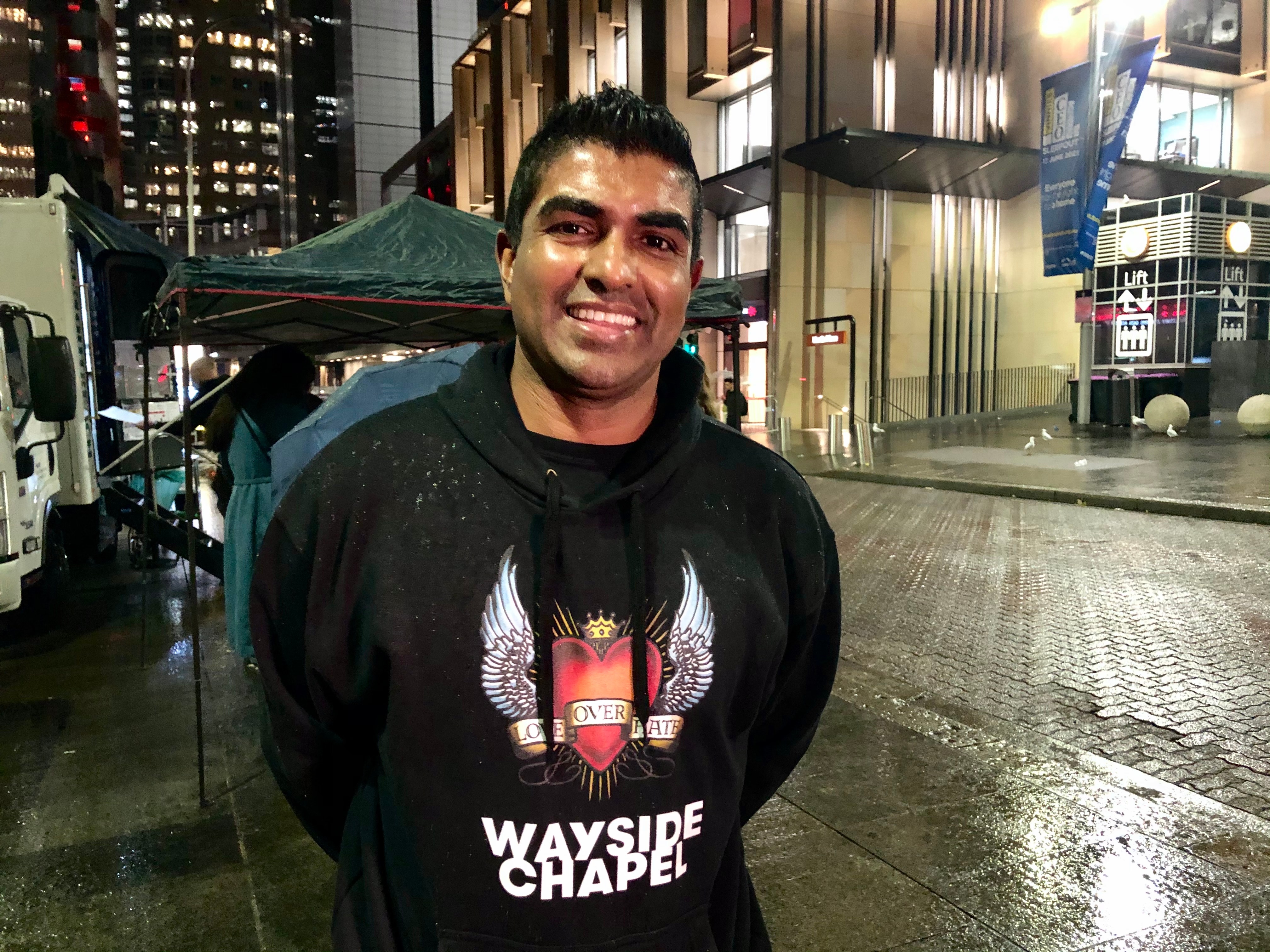 The Wayside Chapel has partnered with medical staff to encourage vaccination uptake among the city’s vulnerable homeless community.

Mr Owen said the last year had been an “anxious” time for the homeless community.

“We all shared a sense of anxiety because it was so unknown the impact this virus would have and this worry was exacerbated for those people on the streets or at risk of homelessness, particularly with their experiences of isolation.

“We’re told to go and isolate at home, but many of the community have no home to isolate in so there was a lot of fear and worry.”

So far, no Australians sleeping rough are believed to have contracted the disease, which Mr Owen describes as “amazing”.

“The inability to socially distance, adhere to public health orders and also a range of health morbidities such as metabolic diseases and respiratory diseases can make them more prone to severe disease,” Dr Read said.

So far he said the flow of vaccinations had been “steady”.

“One of the key factors in healthcare and medical care is the least spoken about, is love, and the bonds of connection that you build and relationships that are created. This then enables people to have less fear and anxiety about accessing health services,” he said.

“We will not end COVID until COVID has ended for everybody.”