Horrific bodycam footage shows the moment an American teenager was gunned down with his hands in the air by a police officer.

Horrific bodycam footage documenting the final moments of American teenager Adam Toledo shows him being gunned down with his hands in the air by a police officer.

A disturbing video shows the Chicago officer fatally shooting the 13-year-old in an alley at around 2.30am on March 29. The US Sun reports that he ran from police while allegedly carrying a handgun alongside Ruben Roman, 21. Bodycam footage, CCTV video, Office of Emergency Management and Communications transmissions, ShotSpotter recordings, and Case Incident Tactical Response were all released.

The arrest reports published by the Civilian Office of Police Accountability (COPA) indicated that the teen posed an “imminent threat of battery with a weapon” as pressure mounted for the footage to be shown.

In one nine-minute graphic body cam clip, a cop drives to the scene, where he knocks over one man they’re pursuing and chases another, later identified as Adam.

“Stop right f***ing now – show me your f***ing hands!” the cop shouts after officers respond to reports of at least nine gunshots and a “lot of commotion” in the South Sawyer area, according to the 911 dispatcher audio.

Adam, wearing a white hat and carrying something, can be seen running ahead and ducking towards a gap in the fence before turning towards the cop and raising his empty hands as gunshots ring out.

“Shots fired, shots fired – get an ambulance over here now!” the cop can be heard saying before approaching the boy, who is bleeding profusely. “Look at me – where are you shot?”

The disturbing video shows Adam gasping for air. The officer leaning over him repeatedly asks the dispatcher to send an ambulance for a “chest wound” as he frantically tries to administer first aid.

When other officers arrive on the scene, the cop can hear saying that he could not feel a heartbeat before performing CPR. “Come on, little man, talk to me,” another officer pleads as Adam lies on the ground – minutes later, the sound of an ambulance rings out, and towards the end of the clip, the first officer who shot him sits nearby. In another body cam video, a female police officer talks to the second man they were pursuing – later identified as Roman – who is on the ground and tells him: “Put your hands behind your back.” 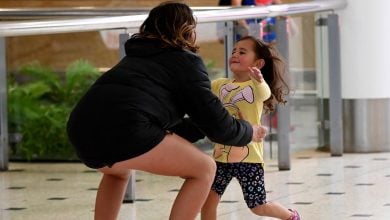