A fire that ravaged a COVID-19 hospital in Iraq’s capital killed 82 people pre-dawn Sunday, sparking angry calls for officials to be sacked in a country with long-dilapidated health infrastructure.

Many of the victims were on respirators when the blaze at Baghdad’s Ibn al-Khatib hospital started with an explosion caused by “a fault in the storage of oxygen cylinders”, medical sources told AFP.

Flames spread quickly across multiple floors in the middle of the night, as dozens of relatives were at the bedsides of the 30 patients in the hospital’s intensive care unit where the most severe COVID-19 cases are treated, a medical source said. 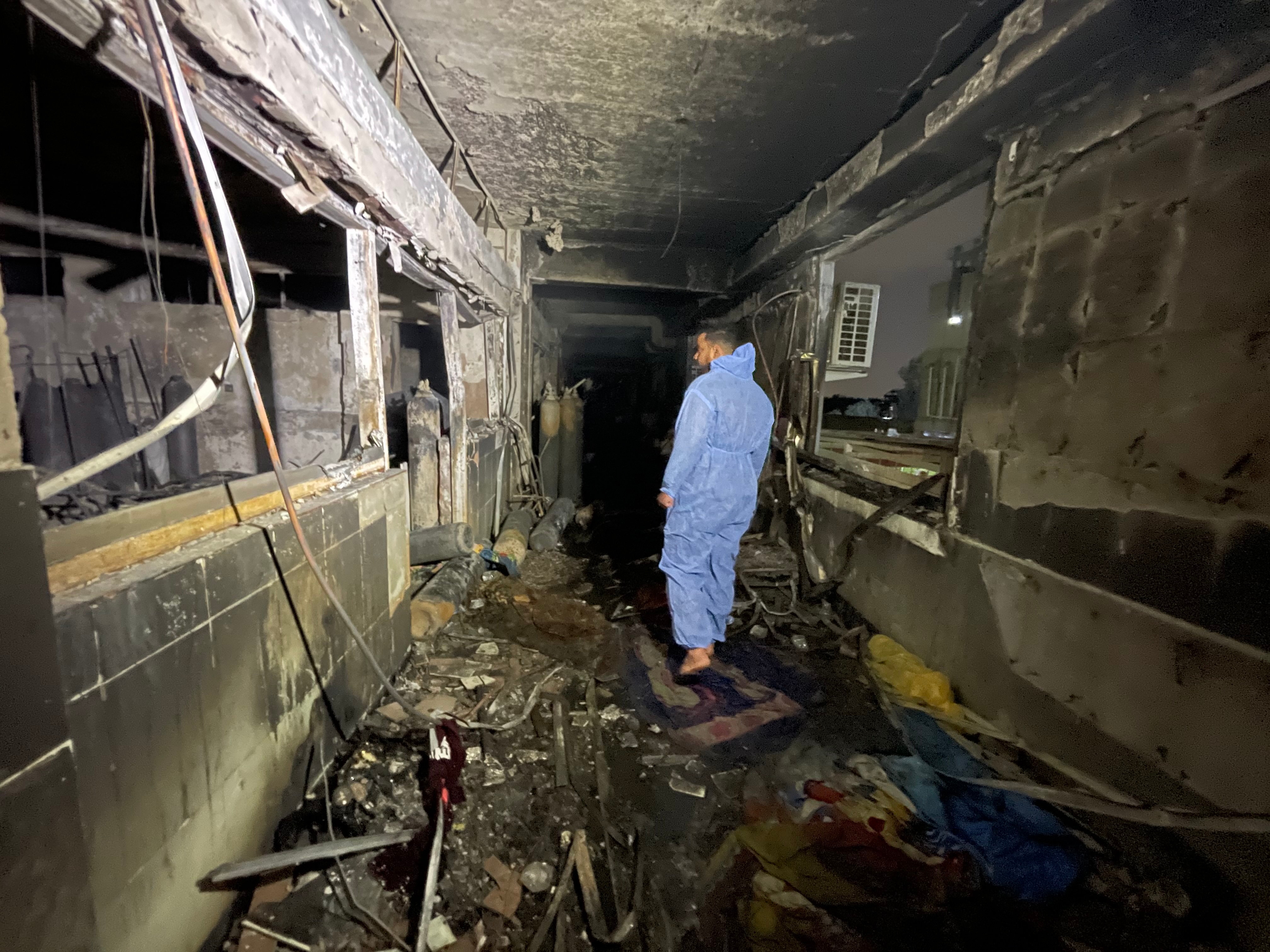 The aftermath of the fire at Ibn Al-Khatib Hospital on 25 April, 2021.

The country’s human rights commission called on the prime minister, who has so far suspended several officials, to fire Health Minister Hassan al-Tamimi and “bring him to justice”, as anger swelled on social media.

At least 23 deaths were reported by medics in the immediate aftermath of the fire, with an official toll of 82 killed and 110 wounded announced later by the interior ministry.

Videos on social media showed firefighters battling to put out the blaze as patients and their relatives tried to flee the building.

“It was the people (civilians) who got the wounded out,” Amir, 35, told AFP, saying he saved his hospitalised brothers “by the skin of his teeth”.

Iraq’s hospitals have been worn down by decades of conflict and poor investment, with shortages of medicines and hospital beds.

Prime Minister Mustafa al-Kadhemi called for an investigation into the cause of the blaze and declared three days of national mourning. Parliament announced it would devote its Monday session to the tragedy.

‘A crime against patients’

After daybreak, dozens of tall oxygen cylinders that had been evacuated could be seen lined up outside the building, alongside gurneys and scattered debris, an AFP photographer said.

More than 200 patients in all were rescued, according to the health ministry.

The fire – caused by negligence often linked to endemic corruption in Iraq, according to several sources – sparked anger, with a hashtag demanding the health minister be sacked trending on Twitter.

Baghdad Governor Mohammed Jaber called on the health ministry “to establish a commission of enquiry so that those who did not do their jobs may be brought to justice”. 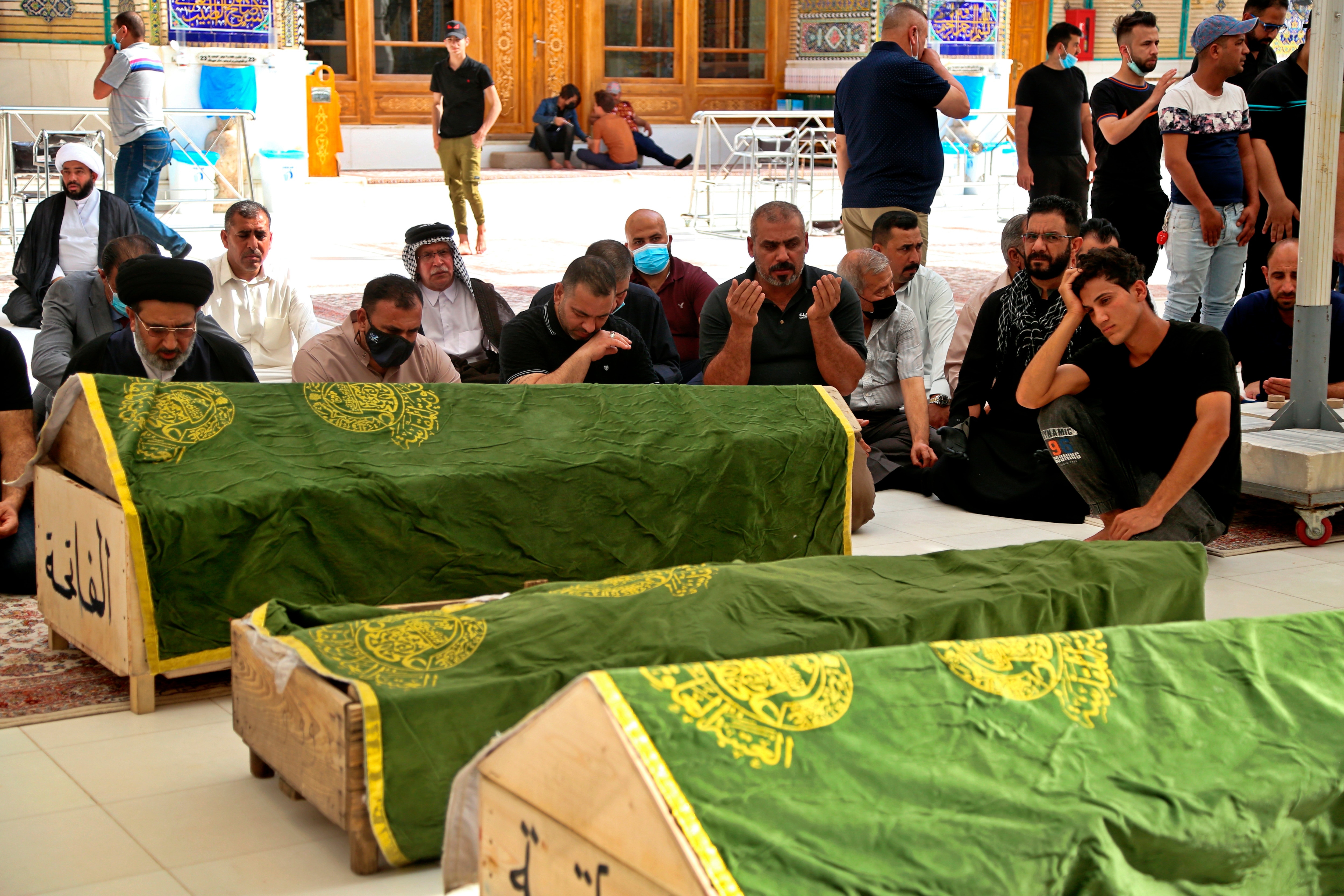 Mourners pray near the coffins of coronavirus patients killed in a hospital fire during their funeral at the Imam Ali shrine in Najaf, Iraq, on 25 April.

In a statement, the government’s human rights commission said the incident was “a crime against patients exhausted by COVID-19 who put their lives in the hands of the health ministry and its institutions.

“Instead of being treated, (they) perished in flames,” it added.

One of the victims of the fire, Ali Ibrahim, 52, had been treated for COVID-19 at Ibn al-Khatib and was buried by his family on Sunday at Zaafaraniya, a neighbourhood near the hospital.

“He had just spent 12 days in hospital and was due to be discharged on Saturday evening after recovering. He was just waiting for the result of the last COVID-19 test,” one of his relatives told AFP.

The prime minister suspended the health director for the eastern sector of Baghdad and the head of Ibn al-Khatib, as well as the hospital’s heads of security and technical maintenance teams.

They are being questioned and nobody, Mr Kadhemi said, will be released “until those who have done wrong are brought to justice”.

The UN’s top representative in Iraq, Jeanine Hennis-Plasschaert, expressed “shock” at the tragedy and called “for stronger protection measures to ensure that such a disaster cannot reoccur”.

On Wednesday, the number of detected COVID-19 cases in Iraq surpassed one million, the highest of any Arab state.

The health ministry has recorded more than 15,000 deaths since the country’s first infections were reported in February 2020, and has carried out around 40,000 tests daily from a population of 40 million.

Rather than go to overcrowded or run-down hospitals, patients who can afford it have often set up oxygen tanks at home.

Iraq rolled out its vaccination campaign last month and has received nearly 650,000 doses of different vaccines – the majority by donation or through the Covax scheme for low and middle income nations.

Around 300,000 people had received at least one dose as of Sunday, the ministry said.

People in Australia must stay at least 1.5 metres away from others. Check your jurisdiction’s restrictions on gathering limits. If you are experiencing cold or flu symptoms, stay home and arrange a test by calling your doctor or contact the Coronavirus Health Information Hotline on 1800 020 080. News and information is available in 63 languages at sbs.com.au/coronavirus