Police were deployed across Hong Kong on Thursday to stamp out any sign of dissent as China’s Communist Party celebrated its centenary, in a vivid illustration of how the once-outspoken finance hub has been successfully muzzled.

The grand celebrations in Beijing coincided with the 24th anniversary of Hong Kong’s 1997 handover to China by colonial Britain.

Since 2003, Hong Kongers have regularly filled the streets each handover anniversary with marches and rallies. In this 1 July, 2019 file photo, protesters flood the streets as they take part in an annual rally in Hong Kong.

But protest has been all but banned in Hong Kong as China carries out a sweeping crackdown against its opponents after huge and often violent pro-democracy rallies convulsed the city two years ago.

More than 10,000 officers – one third of the city’s force – were deployed to prevent any public gatherings as officials warned that any attempt to protest would lead to arrest.

The city’s main park was cordoned off by police and officers conducted multiple stop and searches throughout the day.

With Hong Kong’s chief executive Carrie Lam attending the festivities in Beijing, her deputy John Lee oversaw a flag-raising ceremony in an exhibition centre as police and water cannon trucks patrolled streets nearby.

In a small but significant departure from the past, the ceremony orders were given in Mandarin, rather than the Cantonese generally spoken in Hong Kong.

“While safeguarding national security, residents continue to enjoy freedom of speech, freedom of press, freedom of assembly and demonstration and others according to the law,” he said. 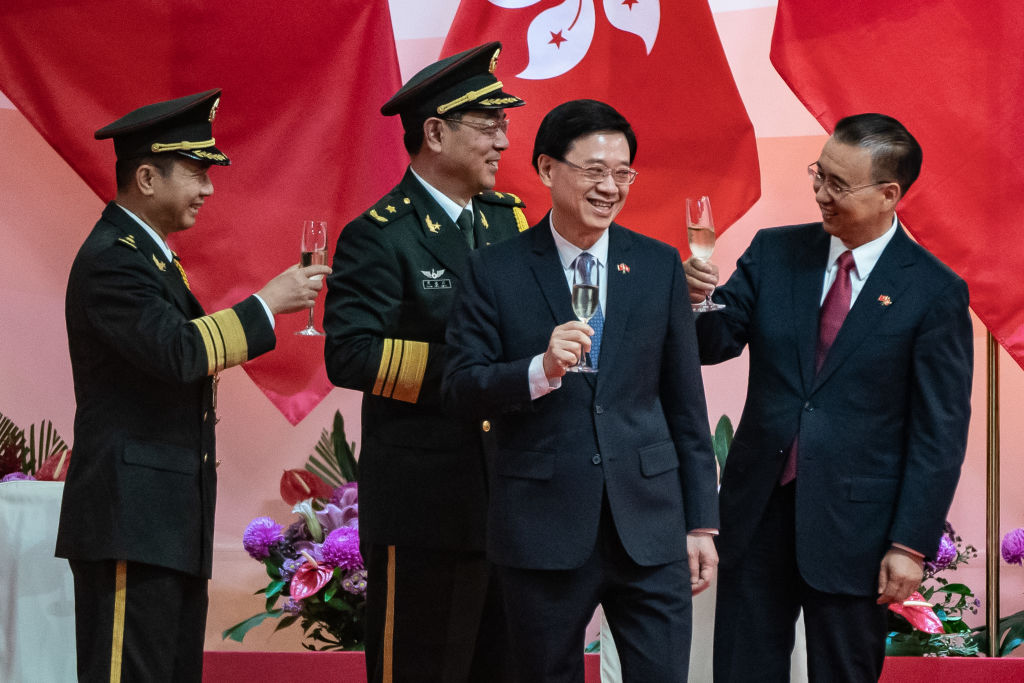 Such assurances are repeatedly made by Hong Kong’s leaders but reflect little of the city’s current reality.

‘Has Hong Kong indeed fallen into a police state?’

Over the last year, the national security law has criminalised a host of political views and transformed semi-autonomous Hong Kong’s political and legal landscape.

Protest has been effectively outlawed, and many of the city’s opposition leaders are arrested, jailed or fled overseas.

Last month, the city’s most outspoken pro-democracy newspaper Apple Daily shut down after its accounts were frozen under the national security law and multiple employees were arrested over articles the popular tabloid published.

Public gatherings of more than four people remain outlawed under anti-coronavirus measures, although the city currently has no active local outbreak.

On Wednesday, prominent human rights barrister Chow Hang-tung was arrested and charged with inciting others to join an illegal protest last month.

“This is persecution as well as privilege,” she said in a message released via her lawyers. “Arresting me won’t succeed in shutting up everyone else.” 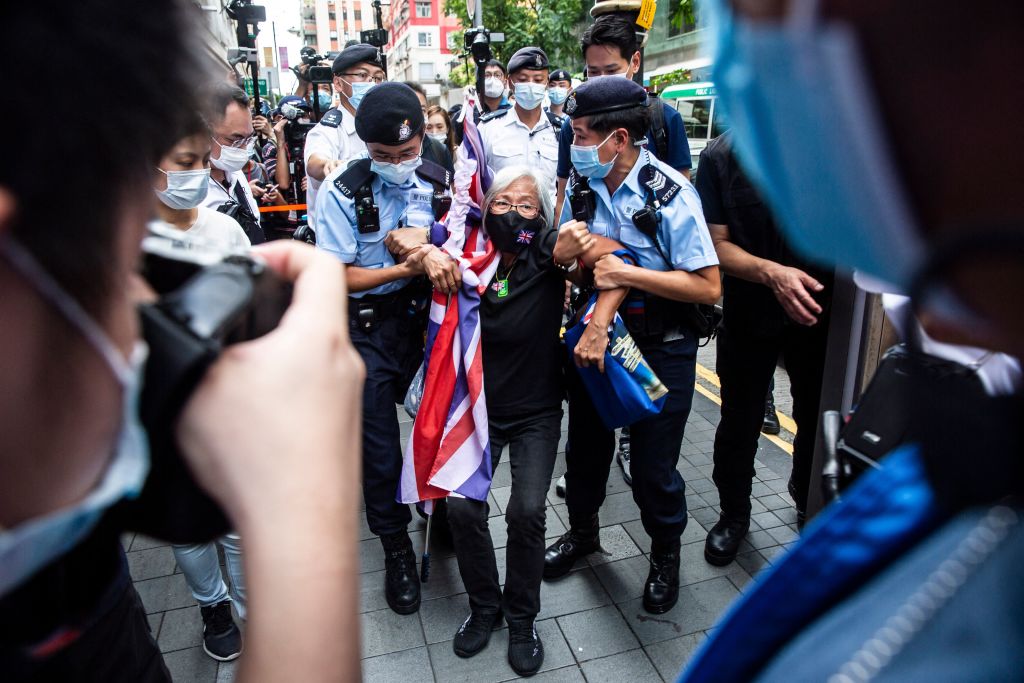 Police take away Activist Alexandra Wong, known as Grandma Wong, on the 24th anniversary of Hong Kong’s handover from Britain, in Hong Kong on 1 July, 2021.

The only visible protest on Thursday morning was carried out by four activists from the League of Social Democrats, one of the few opposition parties still operating.

They held a banner near the official reception calling for the release of political prisoners.

Some 200 police officers followed their lonely march and stopped the group getting too close to the exhibition centre where dignitaries were gathered.

“Police are acting as if they are facing some enormous enemy,” Raphael Wong, one of the activists, told reporters.

“It prompts the question of whether Hong Kong has indeed fallen into a police state. But we will continue to voice out and defend our last space for free speech.”

The force said it had seen online calls for people to attend “banned rallies”.

“It’s sort of expected,” Taras Fung, who had to abandon his basketball game with friends, told AFP. “This is within the normal range of annoyance I guess.”

After the flag-raising ceremony, civil service chief Patrick Nip was asked by a reporter whether he believed Hong Kong could now be described as a police state.

“I think that’s an overstatement,” he replied.