Australia is considering providing further humanitarian assistance to India as the country grapples with a devastating surge in COVID-19 cases.

Health Minister Greg Hunt has confirmed the federal government’s National Security Committee will meet on Tuesday to review measures to support India’s health system as it buckles under the mass outbreak.

The country is suffering critical oxygen shortages, with hospitals forced to turn away patients as the country is ravaged by the virus.

India on Monday once again set a global record for its rise in daily coronavirus cases – recording 352,991 new cases.

Mr Hunt said further support measures to assist India would be considered, describing the situation as a “health crisis on an unimaginable scale.”

“India is literally gasping for oxygen,” he told reporters.

“Their particular request is for assistance with regards to the physical supply of oxygen and that will be one of the things we are looking at.” Multiple funeral pyres of those who died of COVID-19 burn at a ground that has been converted into a crematorium.

“We are in a position to be able to supply non-invasive ventilators. We are in a strong position on that front because we don’t need them at this point in time,” he said.

“Equally we have reached out to the states who actually carry the suppliers of oxygen, to see whether there is any spare capacity that might be provided.”

International efforts are already under way to help India – with Britain, the European Union and the United States pledging they will step up support.

Britain is sending more than 600 medical devices including oxygen concentrators and ventilators to India.

The US is also lifting a ban on sending raw materials abroad, enabling India to make more of the AstraZeneca vaccine.

The European Union has also indicated it is gathering resources to respond to India’s request for assistance.

Mr Modi has said the government is making a “continuous effort” to increase oxygen supplies and has urged citizens to get vaccinated and exercise caution.

“We were confident, our spirits were up after successfully tackling the first wave, but this storm has shaken the nation,” Mr Modi said on Sunday. 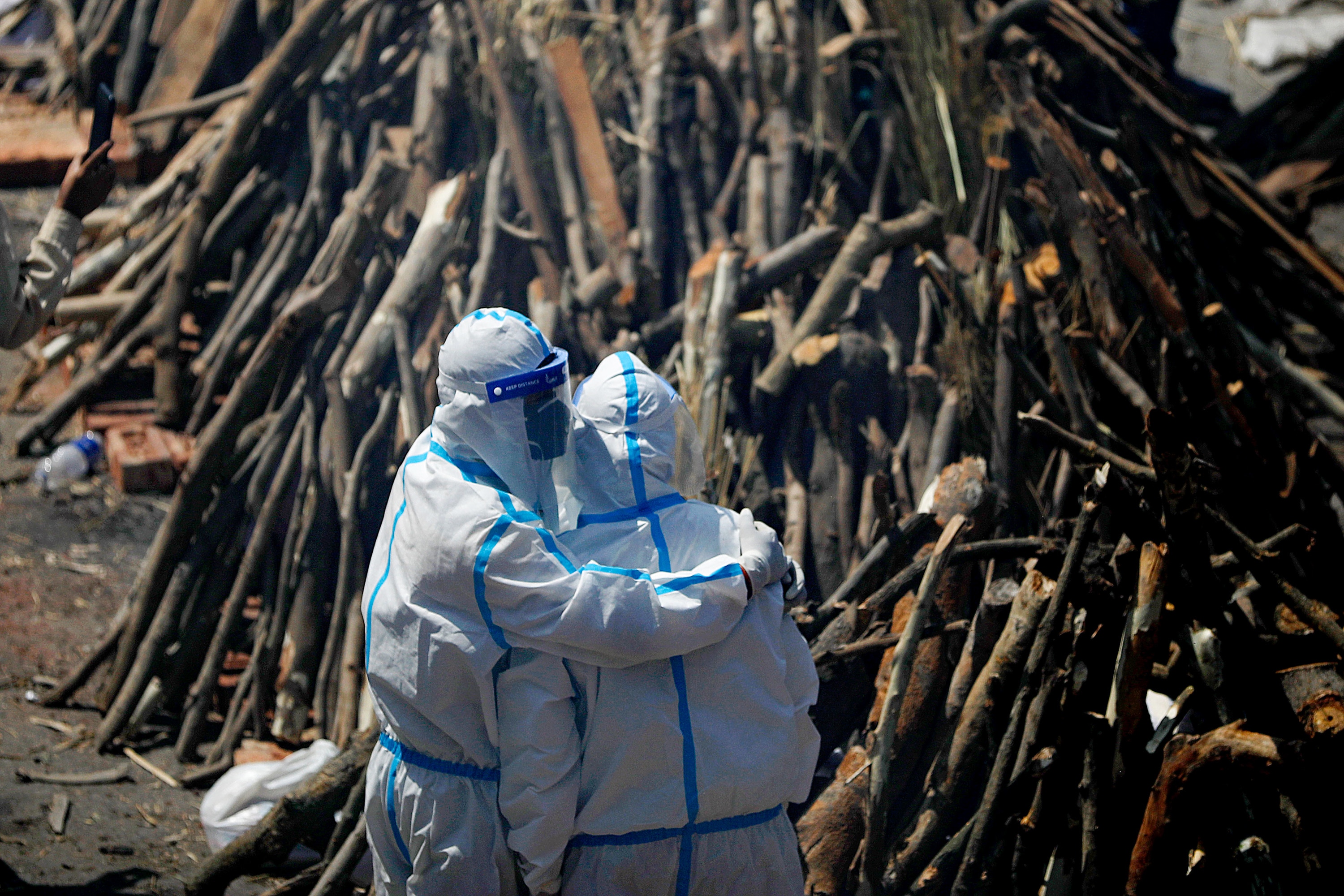 Relatives mourning next to pyres of Covid-19 deceased people at a crematorium in New Delhi.

The number of recorded deaths rose by 2,812 over 24 hours, according to figures released on Monday.

In response to the deteriorating health situation, Australia’s national cabinet last week agreed to reduce the number of flights coming from India by 30 per cent.

Mr Hunt said the National Security Committee would consider whether additional measures were required to further restrict travel to and from India.

“We will take them with the heaviest of hearts but without any hesitation,” he said.

Mr Hunt also recognised the impact the outbreak is having on the Indian community in Australia.

“We recognise that for the Indian community, they are suffering abroad,” he said.

“But our Indian Australian community has also suffered. Their friends and families and loved ones are in extremis, many are contracting the disease and sadly dying every day. Literally, they are dying and unable to breathe.”