Australia will host a memorial service for Prince Philip after the Queen bid a final farewell to her husband in a private coronavirus-secure funeral at St George’s Chapel at Windsor Castle. St Peter’s Cathedral in Adelaide is due to hold a memorial service for the prince on Sunday evening officiated by the head of the Anglican Church in Australia, Archbishop of Adelaide Geoff Smith. Only 30 guests were able to attend the funeral service for Prince Philip overnight due to the restrictions in place in the UK for the coronavirus pandemic. All wore face masks and maintained a social distance inside the chapel.

The Duke of Edinburgh died in his sleep on 9 April, two months before his 100th birthday and shortly after a month-long stay in hospital. Australia was represented by Defence Adviser to the UK Commodore Guy Holthouse on Saturday, who was positioned in the Horseshoe Cloister of Windsor

The castle as the coffin arrived at a guard of honor. The Queen spoke to Australia’s Governor-General David Hurley by telephone on Friday, according to the court circular. Australians have sent thousands of condolence messages online via the government website pmc.gov.au, forwarded to Buckingham Palace. Prince Philip visited Australia 21 times, the first in 1940, before his marriage to the then-Princess Elizabeth. 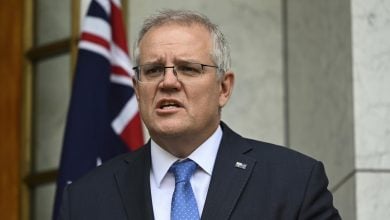