The federal government has scrambled in recent days to minimise the political fallout from its treatment of the Tamil family from Biloela. After almost two years stuck on Christmas Island, the Murugappans are now being permitted to return to the mainland under community detention while their asylum case is settled.

Last week, Foreign Affairs Minister Marise Payne raised the prospect of resettling the family in New Zealand or the US, before Home Affairs Minister Karen Andrews dismissed the idea, saying they are not eligible because they have not been found to be refugees.

All this talk has caused much confusion, and sparked questions around what Canberra is doing to resolve the plight of other displaced people to whom it has refused entry — namely, the hundreds of refugees who have been held for years in Australia’s system of offshore processing.

Ms Andrews has said the Australian government is exploring resettlement overseas for “broad cohorts” of people. The minister’s focus is apparently on refugees who were held offshore in Papua New Guinea and Nauru, and are currently in Australia for medical treatment.

The chance of a resettlement deal with New Zealand for these refugees is reported to be gaining traction – although there are no tangible results yet.

Meanwhile, a deal struck with Washington in 2016 to offer resettlement to the US for up to 1,250 refugees held in PNG and Nauru is still playing out years later.

As of last month, there are approximately 200 refugees who have been approved for entry to the United States and are waiting to depart, and a further 260 pre-approved in advance of final health checks.

Who is eligible for resettlement in another country?

For a start, it helps to understand why Canberra wants other countries to resettle refugees who sought protection in Australia.

On 19 July 2013, the Rudd Labor government introduced a hardline ban on entry: people who sought asylum by boat on or after that date, and were transferred to PNG or Nauru, would never settle in Australia. This has been maintained under successive Liberal governments, and a total of 3,127 people were sent offshore.

The ban has been criticised for its “absolutist ambition” – the idea that the admission of any one person would cause the entire system of border control to collapse.

This is despite the fact Australia has obligations under international refugee and human rights law to protect people fleeing persecution or other serious human rights violations.

A central plank of this absolutism is that asylum seekers who arrive by boat, and are found to be refugees, will only ever be able to secure a durable and humane solution in another country – if such an opportunity can be found. 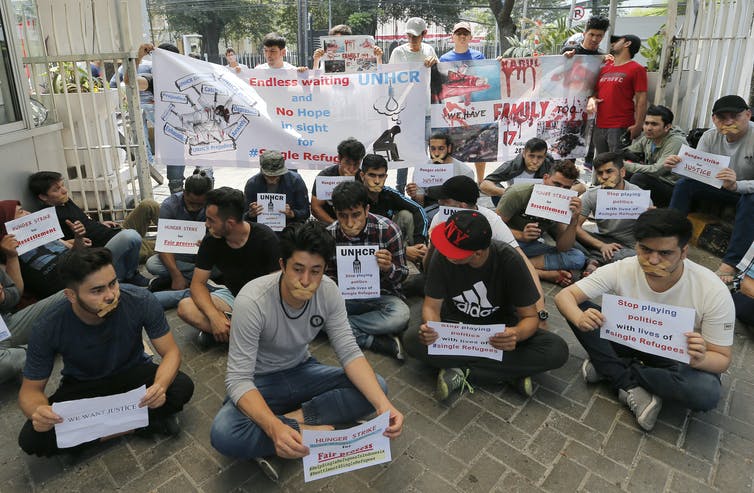 Refugees protesting against Australia’s policies outside the UNHCR representative office in Indonesia in 2019.

For those not subject to the hardline ban on entry – some 30,000 people who sought asylum by boat after mid-2012 and before 1 January 2014, and were not transferred offshore – a complex legal regime narrows their path to protection in Australia.

These people are subject to limited-term visas and a lot of uncertainty. The Biloela family have had to deal with this “byzantine” system, having arrived before the ban came into effect.

After the ban, successive Australian governments have tried to make deals with third countries to resettle those who were sent to PNG or Nauru.

A 2014 agreement with Cambodia was said to cost A$55 million, and was ultimately taken up by just a handful of refugees. In 2015, the Philippines was reportedly wooed by Australian officials for a potential deal to resettle refugees worth $150 million that never eventuated.

The 2016 deal with Washington promised hope for those held offshore. Negotiated with the Obama administration, the deal was soon subject to the whims of President Donald Trump, with resettlement stalling several times.

In a testy phone call with then-Prime Minister Malcolm Turnbull that was leaked to the media, Mr Trump lambasted what he called a “stupid deal” that could allow Australia to export new “Boston bombers” to the US. Mr Turnbull, in turn, provided reassurance that Australia would resettle Central American refugees from the US, telling Mr Trump, “we will take anyone that you want us to take”.

While Mr Trump and Mr Turnbull bickered, the young writer Imran Mohammad, held in detention on Manus Island, said he feared “the Australian government has no proper plans for our future”.

Amid long delays in resettlement to the US, non-profit organisations have recently taken up the cause, with one group securing up to 140 places in Canada last month for refugees still held in limbo under the offshore policy.

Resettlement deals aren’t new. On several occasions since the 1960s, Australia has offered to resettle refugees whose journeys to the US were politically contentious. This includes generations of Cubans who have tried to flee their island nation since the early 1970s. As recently as 2017, Australia resettled 17 Cubans found clinging to a lighthouse off the coast of Florida.

Washington has responded in turn. The most recent and well-known example is the 2016 resettlement agreement, but the practice has a longer history, involving refugees held under the Howard government’s version of offshore processing in the early 2000s.

These transfers have been upheld by both governments as a sign of bilateral goodwill and cooperation. But the UN refugee agency UNHCR has been less impressed, noting that Canberra’s insistence on denying entry to Australia for even those refugees who have close family in the country is contrary “to common decency”.

This coming year, Australia will spend around $2 billion to maintain its onshore and offshore detention centres. Many of the people within that system have been held in limbo for years.

The government rhetoric has not softened on the issue, either, not even with Tharnicaa Murugappan marking her fourth birthday in a Perth hospital after contracting a blood infection caused by untreated pneumonia.

To release these two young children and their parents back to Biloela, the argument goes, would reignite the people smuggling trade – what Attorney-General Michaela Cash has called the “consequences of blinking”.

But this approach has a significant human and economic cost, and damages Australia’s reputation abroad. The offshore system, and the treatment of the young family from Biloela, have earned Canberra plenty of criticism in the international press.

With long delays and no guarantees, it is clear that resettlement deals cannot get Australia “off the hook”, either.

Claire Higgins receives funding from the Australian Research Council. This article is part of a series on asylum seeker policy supported by a grant from the Broadley Trust.