The video was taken by an eyewitness to shooting at the King Soopers grocery store at South Boulder, about 2.50pm local time on Monday, appeared to show motionless individuals on the ground and outside the store, and purported gunshots are heard, according to CNN. The footage, taken by Dean Schiller, was part of a longer livestream that he showed as the shooting progressed and police arrived.

Summary show
We don’t know if there’s a shooter, active shooter somewhere,” he says in the video excerpt.
“He went in the store?” Mr. Schiller asked.
Meanwhile, the heroic police officer, who was one of the victims, has been identified.
Officer Talley responded to the scene, was the first on the scene, and he was fatally shot.”

We don’t know if there’s a shooter, active shooter somewhere,” he says in the video excerpt.

Asking what appears to be a store employee whether a gunman went into the store, the worker responds, “Yeah, he went in there.”

“He went in the store?” Mr. Schiller asked.

“He went right down there,” the man responds. “Oh, my God. Guys, we got people down inside Kings Soopers,” Mr. Schiller said, starting another sentence before two gunshots cut him off.

Eyewitness accounts say a man in full tactical gear was silent as he opened fire in the car park of the grocery store before moving into the store where the shooting continued.

Soon after, a shirtless white man with a beard was escorted from the scene with his hands cuffed behind his back. He had blood running down his right leg and was limping.

Meanwhile, the heroic police officer, who was one of the victims, has been identified.

Law enforcement officials said the cop was veteran Officer Eric Talley. He had served in the Boulder Police Department since 2010 and was one of the first officers to respond to the shooting at the King Soopers grocery store at South Boulder, about 2.50pm local time on Monday.

“And I have to tell you, the heroic action of this officer when he responded to the scene,” an emotional Police Chief Maris Herold said at a press briefing.

Officer Talley responded to the scene, was the first on the scene, and he was fatally shot.”

Officer Talley served in “numerous roles” after he joined the department, he added. Paramedics placed him on a stretcher before he was lifted into the back of an ambulance and accompanied by police.

Multiple media reports say the death toll has reached 10, including one police officer. Witnesses say at least three people were on the ground, not moving, and more than 10 injured. At a press conference outside the supermarket, authorities said there was only one suspect and no details about a motive at this stage. “We had a very tragic incident today,” Boulder Police Commander Kerry Yamaguchi said. There was a loss of life, multiple people were killed. I’m sorry to have to report one of them was a Boulder police officer.

“We got tremendous support from law enforcement agencies. Without that quick response, we don’t know if there would’ve been more loss of life. “There is no ongoing public threat. We have a person of interest in custody., and that person was injured and is being treated for the injuries.” District Attorney Michael Dougherty told reporters: “This is a tragedy and a nightmare for Boulder.”

SWAT teams gathered at the scene described by witnesses as “chaos”. Over a loudspeaker, police told the shooter inside, “you need to surrender”. The bloodied man emerged wearing just his underwear. 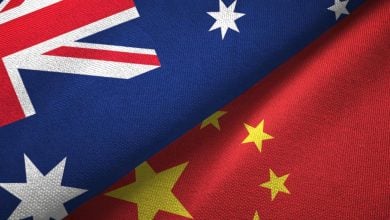