Wendy Gutteridge moved to Australia from England in 2015 and never wanted to leave. The 45-year-old worked as a prosecutor for the RSCPA in Victoria and became an Australian citizen last year.

But as the state and country she called home closed their borders to prevent the spread of COVID-19, ‘Fortress Australia’ began to feel like a prison.

The international travel ban meant it was impossible for her to visit her widowed mother in England, so in January she packed her bags and gave up on her dream. Wendy Gutteridge had planned to stay in Australia long-term.

Ms Gutteridge says the government’s handling of the travel ban cast a shadow on her experience in Australia and, despite having citizenship, can’t see herself rushing back anytime soon.

“There’s just been no recognition for people who are desperate to see their families and they keep putting the dates back and back and back.”

“I wonder whether or not people will think twice about moving to another country, emigrating to Australia on a permanent basis, if you’re going to be a prisoner there. That’s how it felt, like I was trapped, I really felt quite isolated.”

Brittney Lee, 33, has also struggled with the separation from her family, who live in the US, after moving to Perth with her Australian husband five years ago.

“It hasn’t been good at all. Honestly, this last year has probably been one of the hardest on my mental health, not knowing when I would see them,” she says

Ms Lee works in the disability sector and her husband Mark, 36, is a diesel engineer in the mines. 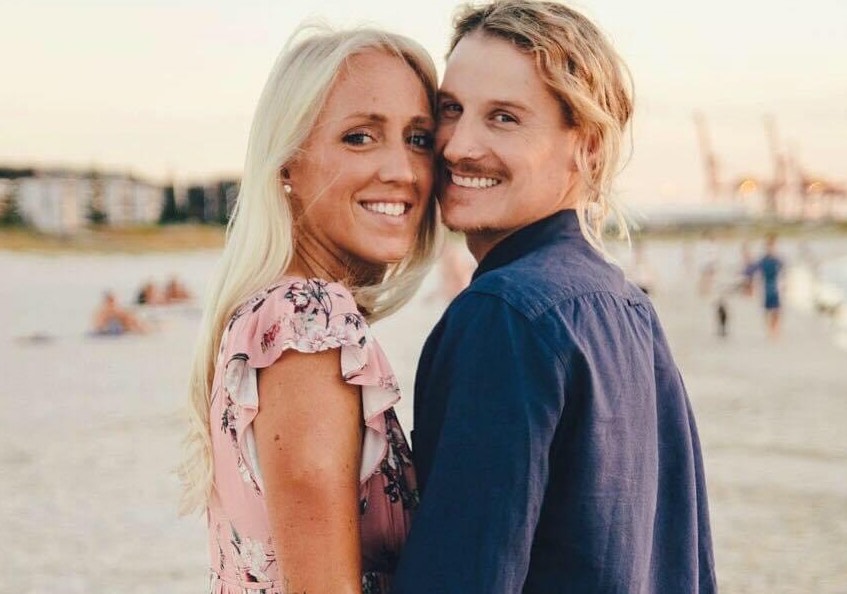 Brittney Lee and her husband Mark are calling it quits on Australia.

Within two weeks, the couple plan to move to California, blaming Australia’s strict conditions on arrivals and departures.

“I see this as very long term, especially after this last year and seeing how Australia has handled the border restrictions and all that,” Ms Lee says.

She has permanent residency in Australia and had planned to apply for citizenship but now doesn’t see the point.

“It might make it easier long term, but I have PR – which I’ve spent over $10,000 on and waited two-and-a-half years for – but now I’m probably going to lose it anyway, just with how visas work, but I don’t look at it as a loss anymore.”

The couple has also put a hold on having children. Ms Lee wants to see her family in the US.

“I can’t be stuck here in the future with kids, with family over there,” Ms Lee says. “Or if I need to go back and my husband’s here with the kids, or I need to go home for an emergency and I can’t get back, I can’t risk that.”

All that’s left in order for them to be able to leave the country is an exemption from the federal government.

“In a few weeks, Mark will have his green card, he’ll have proof of a job offer in America. We’ll have proof that we quit our jobs, that we ended our lease, we have all that proof, so I assume we’ll get an exemption but I’ve also heard of people having that proof and being denied.”

‘We can’t wait that long’

For Annelies and Daniel Kavan, not being able to see family in Canada after having their first child last year has weighed heavily.

“It was incredibly, incredibly difficult. I had some serious health issues when Max was first born and not being able to have family that we had intended on having around was just almost impossible,” Mrs Kavan says. 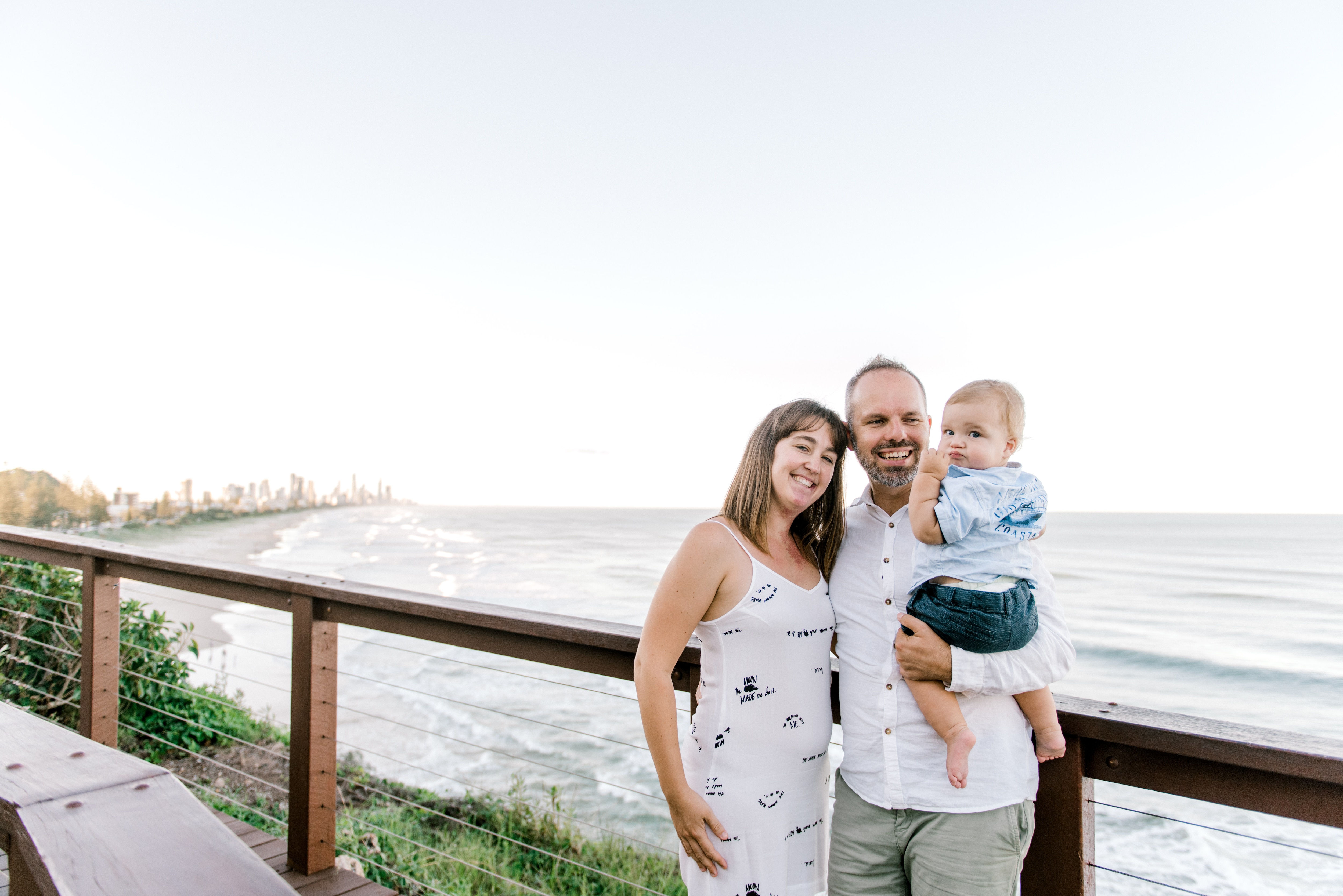 Annelies and Daniel Kavan are considering leaving the Gold Coast for good.

The couple has been living on the Gold Coast since March 2017 and built successful careers. Mrs Kavan is a freelance screenwriter and her husband is a consultant in the legal technology industry.

“If the only way we can see family is if we go overseas, then we’re really left with no other choice,” Mr Kavan says.

“The borders aren’t going to be open until at least mid-2022. I feel like we can’t wait that long and we’d be looking at moving over to Canada at the end of this year or the start of next year.”

Mr Kavan says the federal government is ignoring families like theirs. The Kavans miss family in Canada.

“Closed borders have helped keep coronavirus out and keep Australians safe, but at the same time, the toll it’s taken on a lot of Australians’ mental health to be torn apart from their families for so long shouldn’t be underestimated.”

“There’s been a bit of an anti-migrant sentiment from the government. I think. It doesn’t take into account all these people who have strong connections and family overseas, which is most people.”

The 2016 census found nearly half (49 per cent) of all Australians were either born overseas or had at least one parent who was born overseas.

Since March last year, 156,507 Australian citizens and permanent residents were given exemptions to leave Australia out of 329,180 who made requests, according to the Australian Border Force.

A total of 84,031 requests from Australian citizens and permanent residents to leave Australia were denied.

In April, there were 65,100 departures from Australia, the highest monthly figure since the pandemic began, according to the Australian Bureau of Statistics.

“When you are getting migrants who are leaving and they’re taking valuable skills with them, it will be harder to replace some of those skills in the short term,” he says.

“If we can’t replenish it easily through migration or through training, which can take some time, that’s a skill we won’t have in the Australian economy for a period.”

Mr Coates says Australia likely remains a popular destination for skilled migrants given the way it’s prevented the spread of COVID-19 but that could be impacted by a sluggish vaccine rollout.

“While migrants abroad might look at Australia as a destination that looks pretty attractive, that fact that you’ll find it hard to return home and see your families – certainly over the course of the next year based on the budget forecasts – does make Australia less attractive than it could be.”

“If we’d got that vaccination program running faster and we were in a position where we could open to the world and no longer need these restrictions in place at the border, [things might be different].”

For now, getting the 40,000 Australians still stranded overseas back into the country remains a federal government priority, but the pressure is growing on Canberra to do something to support those with family overseas.

“In an ongoing period of border uncertainty, one of the policy challenges we’re going to have to turn our minds towards is, how do we make sure that we retain enough people within the Australian context to keep the economy ticking over? Particularly as we’re not able to attract a new migration program to Australia at this point in time.”

“Family reunion will have to be a priority … we need to start to re-look at the migration program and examine what a post-COVID migration looks like. We’re going to have look at the family [visa] stream particularly in circumstances where there are vulnerabilities within a family or care obligations.”

“The reality of modern migration is that it is very fluid and that when you move overseas there is an expectation, you’re going to be able to see family again periodically – often more than once a year, often three or four times a year – and so the idea of a prolonged period without family is a significant weight in terms of the migration settlement experience.” Prime Minister Scott Morrison says the safety of people in Australia needs to remain a priority.

“The reopening of international borders is something that is very hard, very, very hard for us to put a sort of finite position on,” Prime Minister Scott Morrison said last month.

He has said the safety of people in Australia must remain the priority.

“I understand that everyone is keen to get back to a time that we once knew, but the reality is we are living this year in a pandemic that is worse than last year.”

“Australia has been successful because we’ve run a successful border control policy, and I’m not about to put that at risk.”

Any plans for vaccinated Australians to be able to leave the country could happen “only when it is safe to do so”, he has said.

Readers seeking support with mental health can contact Beyond Blue on 1300 22 4636. More information is available at Beyond Blue.org.au. Embrace Multicultural Mental Health supports people from culturally and linguistically diverse backgrounds.