Hong Kong’s embattled pro-democracy newspaper Apple Daily has been hit by a wave of resignations as authorities push to silence the outspoken tabloid and staff mull whether to leave or stay until the bitter end.

On late Monday afternoon, Apple Daily’s 1,000-odd staff got the news they had long expected given Hong Kong’s hardening political climate: the 26-year-old paper was on its last legs.

The board had met that day and announced the paper was almost certainly going to close unless they found a way to unfreeze its assets, with a final decision to be made on Friday.

Section heads then gathered staff and told them they could decide whether to resign immediately or stay until the final day – whenever that might be – according to three employees who were present.

“I hastily decided to hand in my resignation letter after my team meeting,” a reporter who asked just to use the name Joanne, told AFP.

“I believe the risk of being arrested is real… I do not want to see anyone else being rounded up anymore,” she added.

Apple Daily has long been a thorn in Beijing’s side, with unapologetic support for the city’s pro-democracy movement and caustic criticism of China’s authoritarian leaders. 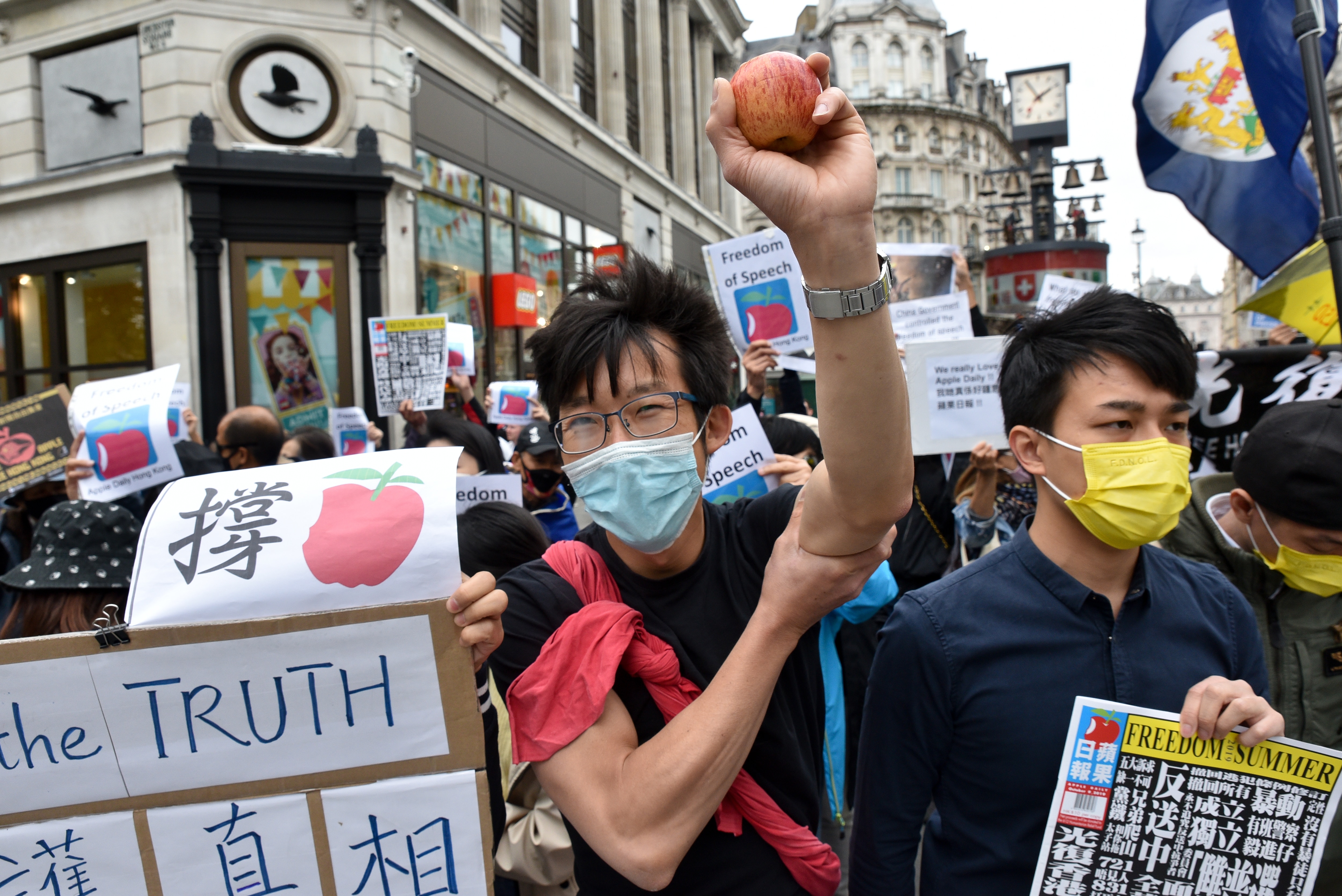 People protest for press freedom in Hong Kong on 19 June 2021.

Those same leaders have made no secret of their desire to see the paper shuttered.

Its owner Jimmy Lai is in jail, among the first to be charged under a new national security law Beijing imposed on Hong Kong last year to root out dissent after the financial hub was rocked by huge and often violent democracy protests in 2019.

Then came last week’s hammer blow – the charging of two more executives under the powerful security law and the freezing of Apple Daily’s assets by the city’s security chief.

The latter left the paper unable to pay staff, vendors and suppliers. Advertisers and supporters who tried to deposit money into its accounts were unable to do so.

Authorities say the police action was sparked by articles over the last year that allegedly supported the imposition of sanctions on China and Hong Kong.

Mr Lai, the paper’s editor Ryan Law, and its chief executive Cheung Kim-hung have been charged with colluding with foreign forces to undermine China’s national security. They face up to life in prison if convicted. 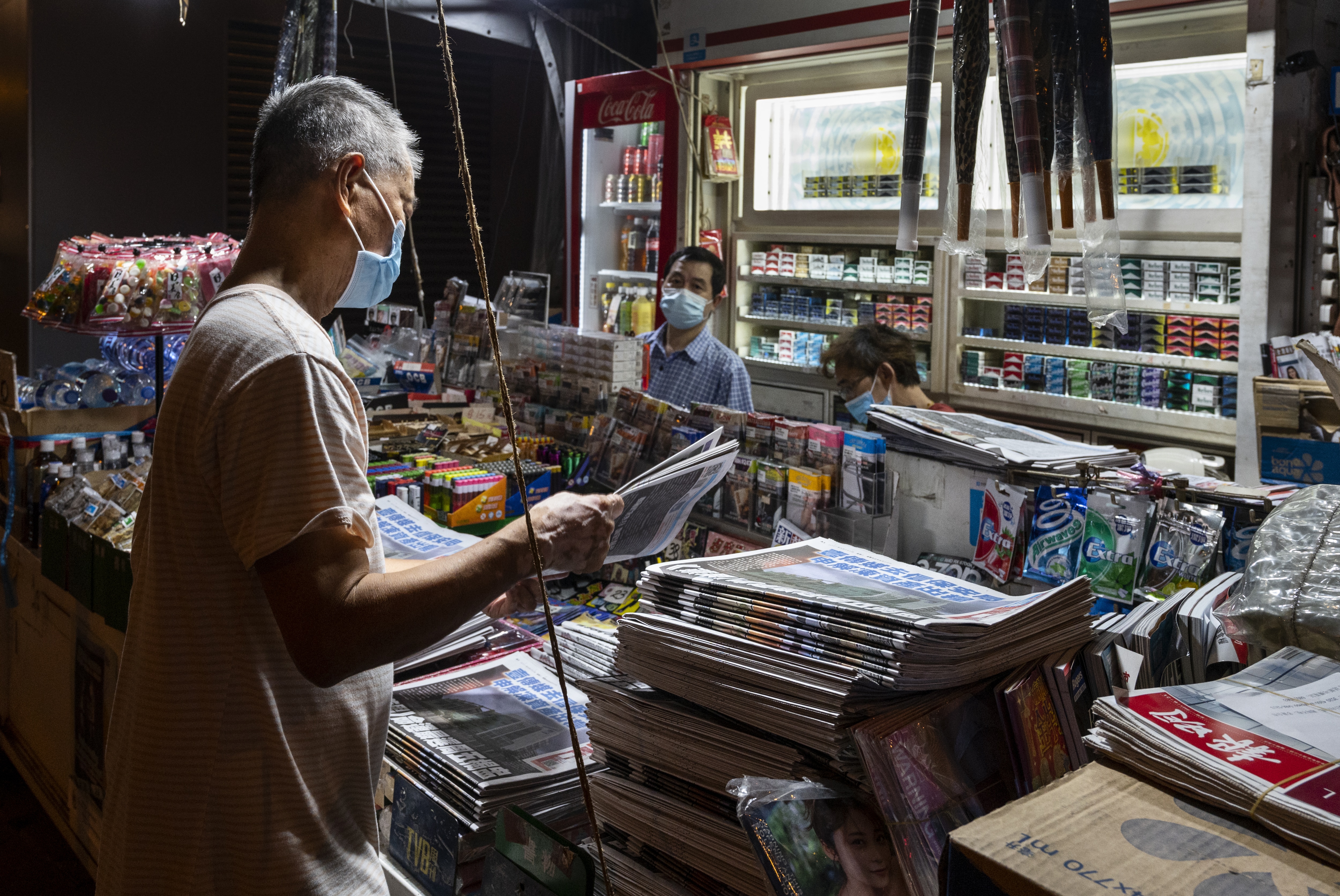 A man purchases a copy of Apple Daily newspaper at a newsstand in Hong Kong on 22 June, 2021.

Authorities reject suggestions that the prosecution is an assault on press freedoms. They have not identified which articles were illegal but say the paper’s content pointed to a “conspiracy”.

It is not clear how many Apple Daily staff have resigned but several were filmed carrying boxes out of the paper’s headquarters on Monday evening and the departures have already impacted the paper’s coverage.

On Monday night, the anchor of a half-hour daily evening news show broadcast online announced she was hosting her final episode.

The paper’s financial news desk and its English edition have also announced they have ceased publishing.

Another reporter who only gave her first name, Peggy, said colleagues spent Monday afternoon bidding farewell to those who had decided to leave, and taking group photos.

“It felt like a graduation ceremony, but there was the constant sound of someone crying,” she told AFP, adding she had quit and lined up a job in another industry.

All three spoke of the pride they felt working for the paper.

But Joanne said she felt local reporters were no longer allowed to do their job unimpeded.

“Is it allowed or not in today’s Hong Kong for me to say something I truly believe in and I have facts to support?” she asked rhetorically. An employee stacks freshly printed newspapers onto a pallet in the Apple Daily printing facility in Hong Kong.

Kitty, 40, said she has yet to decide whether to remain in the industry.

“Even when I find a new job in a different newspaper, I suppose the newsroom will be much more cautious,” she said, referring to the self-censorship that has crept into the local media scene in recent years.

Peggy said she had no regrets about the three years she spent working for the paper.

“It’s my honour to be an Apple Daily reporter when Hong Kong’s situation went through such a crazy period,” she said.

“Everything I did here brought no shame upon myself or Hong Kong’s people.”