Cuba’s President Miguel Diaz-Canel denounced what he said was a false narrative over unrest on the Caribbean island, as the Communist regime vigorously pushed back against suggestions of historically widespread discontent.

“What the world is seeing of Cuba is a lie,” Diaz-Canel said, speaking during a rally alongside ex-president Raul Castro and before thousands of supporters who had gathered on the Malecon, Havana’s famed oceanfront boulevard.

The rally, and similar ones in other cities, constituted the regime’s first public response to the anti-government protests that unexpectedly brought thousands to Cuban streets last weekend.

Organizers described the event Saturday as one of “revolutionary reaffirmation.”

Cries from the crowd – “Down with the Yankees!” and “We were born to conquer, not be conquered!” — echoed the anti-imperialist language of the original Cuban revolutionary, former president Fidel Castro.

Diaz-Canel decried what he said was the dissemination of “false images” on social networks that “glorify the outrage and destruction of property.”

Those images, he said, had caused “immeasurable damage to the national soul.”

On July 11 and 12, thousands of Cubans took to the streets in 40 cities shouting “Freedom,” “Down with the dictatorship,” and “We’re hungry.”

One person has died and more than 100 have been arrested since the protests broke out over the worst economic crisis in decades. There is an “overflowing hatred on social networks,” the president insisted on Saturday.

His supporters, summoned from work places and universities, waved red-blue-and-white Cuban flags and the banner of the 1959 revolution. They enthusiastically applauded both Diaz-Canel and Raul Castro.

The presence of the 90-year-old Castro, drawn out of retirement because of the gravity of the situation, was noteworthy. He wore his olive-green general’s uniform, harkening back to his revolutionary role alongside brother Fidel.

“Everyone who feels something for the revolution, who felt something for Fidel, for all he did for this country and that we must continue to do, knows what Raul’s presence here means,” said one rally participant, 65-year-old Carlos Cruz.

After last weekend’s protests, Cuba cut off internet access on the island for three days. Even after access was restored, social media and messaging apps such as Facebook, WhatsApp and Twitter remained blocked on 3G and 4G networks.

Social media is the only way Cubans can reach independent news outlets, while messaging apps are their main means of communicating among themselves.

US President Joe Biden has said Washington is considering ways to ease internet restrictions, though analysts have warned it could be tricky for technological and political reasons.

Diaz-Canel said the “lie” about widespread protests was not committed “by chance or mistake; all this is the cold calculation of an unconventional-war manual.”

But the rallies were the largest since the revolution and came as the country endures its worst economic crisis in 30 years, with chronic shortages of electricity, food and medicine amid a spike in coronavirus infections.

“With or without the pandemic, we have to defend (the revolution),” said 73-year-old teacher Hector Roman, who wore a protective mask. 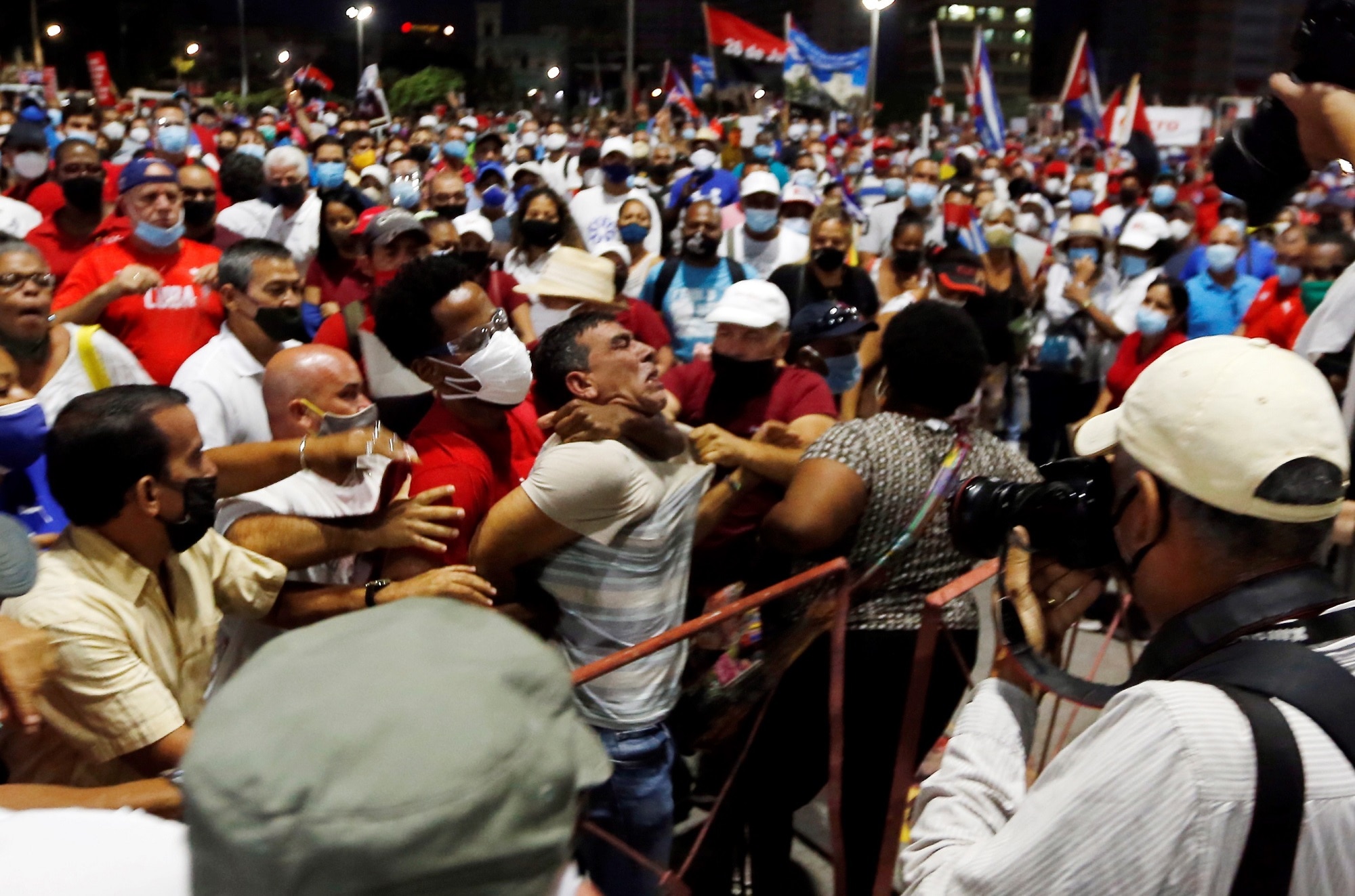 A man is arrested during an event in support for the revolution in Havana, Cuba on 17 July 2021.

Havana, under US sanctions since 1962, has blamed the show of discontent on Washington pursuing a “policy of economic suffocation to provoke social unrest.”

Biden called Cuba a “failed state” on Thursday and said its leaders were “repressing their citizens.” He said the US was prepared to potentially send significant amounts of Covid vaccine to the island. Cuba has also been developing its own vaccines.

Shortly before the rally began, police arrested a man who shouted “Patria y Vida” (“Homeland and Life”), the title of a protest rap song which has become the anthem of anti-government demonstrators.