Peruvians will pick a president on Sunday in an election that has bitterly divided them by class and geography, with urban and higher-income citizens preferring right-wing Keiko Fujimori while the rural poor support leftist political novice Pedro Castillo.

Polls in the runoff election are to open at 7am (local time) in most of the country’s 11,700 voting centres, with official results starting to arrive from 11:30pm.

Polls show the race in a statistical dead heat but with Ms Fujimori, who had earlier trailed Mr Castillo, pulling slightly ahead.

Ms Fujimori, 46, the daughter of jailed ex-president Alberto Fujimori, is promising to maintain economic stability and pro-free market policies in the world’s second-largest copper producer, as well as to pardon her father, who was sentenced for human rights violations.

Ms Fujimori herself spent several months in custody on corruption allegations she denies. If she wins, the criminal case against her will be halted while she leads the country. In this 24 March, 2021 file photo, presidential candidate Keiko Fujimori waves to supporters as she campaigns on the outskirts of Lima, Peru.

Mr Castillo, 51, an elementary school teacher and union leader, has galvanised support from Peru’s rural poor – and scared investors – with pledges to nationalise the mining sector, a stance he later sought to take back. He has vowed to alter multinational companies’ tax regimes and wants to rewrite the country’s constitution.

He is from a remote village near the town of Tacabamba, in Peru’s northern Andes, which on Saturday night cheered him as he made his way back home to vote. Mr Castillo gave brief remarks, even though political campaigning is banned in the last days before an election in Peru.

The city government installed a stage in the main square, which was filled with supporters and music. The rest of the city has been plastered with pro-Castillo banners, without a single pro-Fujimori sign to be seen. 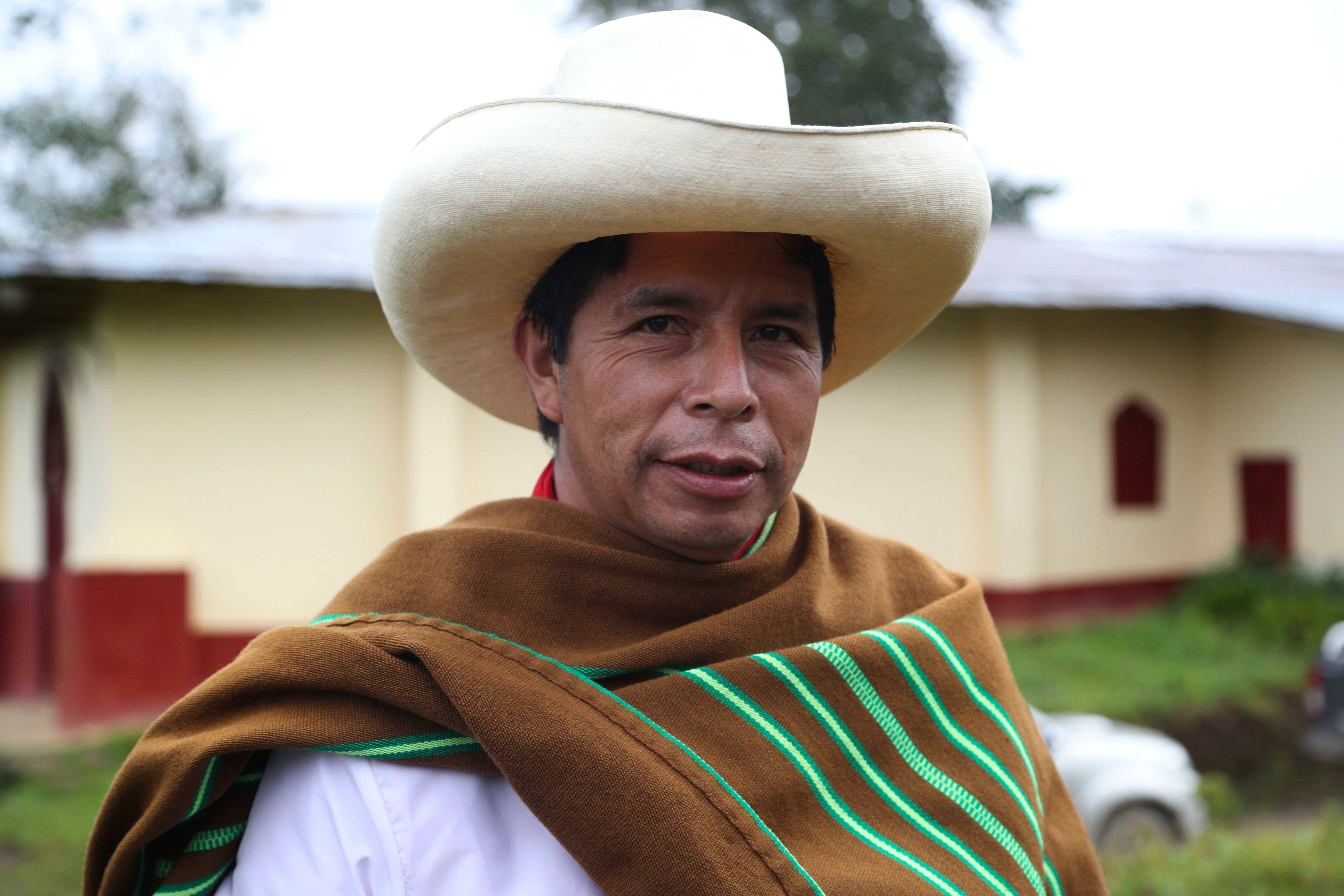 In this 16 April, 2021 file photo, Free Peru party presidential candidate Pedro Castillo poses for a photo on his property in Chugur, Peru.

Many Peruvians hold a deep mistrust of politicians following two decades in which five former presidents have been investigated or prosecuted for corruption.

Ruth Rojas, a Peruvian mother whose daughter has a disability and who says she lives in deep poverty, said she believed neither of the candidates’ vows.

“They promise everything until they get into government but then they forget about the poor, they just think of themselves and their own people,” she told Reuters.

Pollsters say undecided voters and Peruvians living abroad could tip the balance in the crunch poll.

Overseas Peruvians make up around one million, almost four per cent of the 25 million-strong electoral roll. Normally, few of them vote – only 0.8 per cent in the first round of the election in April, when COVID-19 lockdowns were commonplace.

However, the head of Peru’s National Office of Electoral Processes, Piero Corvetto, said that with vaccination programs now further advanced in areas where Peruvian expatriates predominate – such as the United States, Spain, Argentina and Chile – more people were likely to turn out. A staff member stands as Peruvian nationals living in Japan search their names on voters lists at a polling station in Tokyo, Japan, 6 June 2021.

He said he expects overseas Peruvians to account for 1.5 per cent of the vote.

A neck-and-neck result could lead to days of uncertainty and tension if it takes time to settle on a winner.

Mr Castillo has said that if something untoward were to happen, he will “be the first to summon the people,” although on Saturday night, he told the crowd he would respect the electoral results.