Former US president Donald Trump returned to the spotlight on Saturday local time for his first speech in months, framing next year’s midterm elections as a battle for the “survival of America” – but keeping followers guessing on his own plans for 2024.

Mr Trump lapped up applause from Republican supporters as he described the United States as “being destroyed before our very own eyes” since he was voted out, and launched bitter criticism of his victorious rival President Joe Biden.

“The survival of America depends upon our ability to elect Republicans at every level, starting with the midterms next year,” Mr Trump said. “We have to get it done. We have no choice actually. We’re going to defend our freedoms.”

Mr Trump described 2024, the year of the next presidential election, as “a year that I look very much forward to” – drawing loud cheers from the audience in Greenville, North Carolina at the state’s Republican Party convention.

Addressing a sold-out crowd of about 1,250 for his first major speech since February, Mr Trump, 74, appeared to lack much of the raw energy and enthusiasm that he often brought to his raucous, larger campaign rallies.

In contrast, the crowd fell largely silent during his claims of successfully tackling COVID-19 and of developing the vaccines that have helped quell the pandemic. 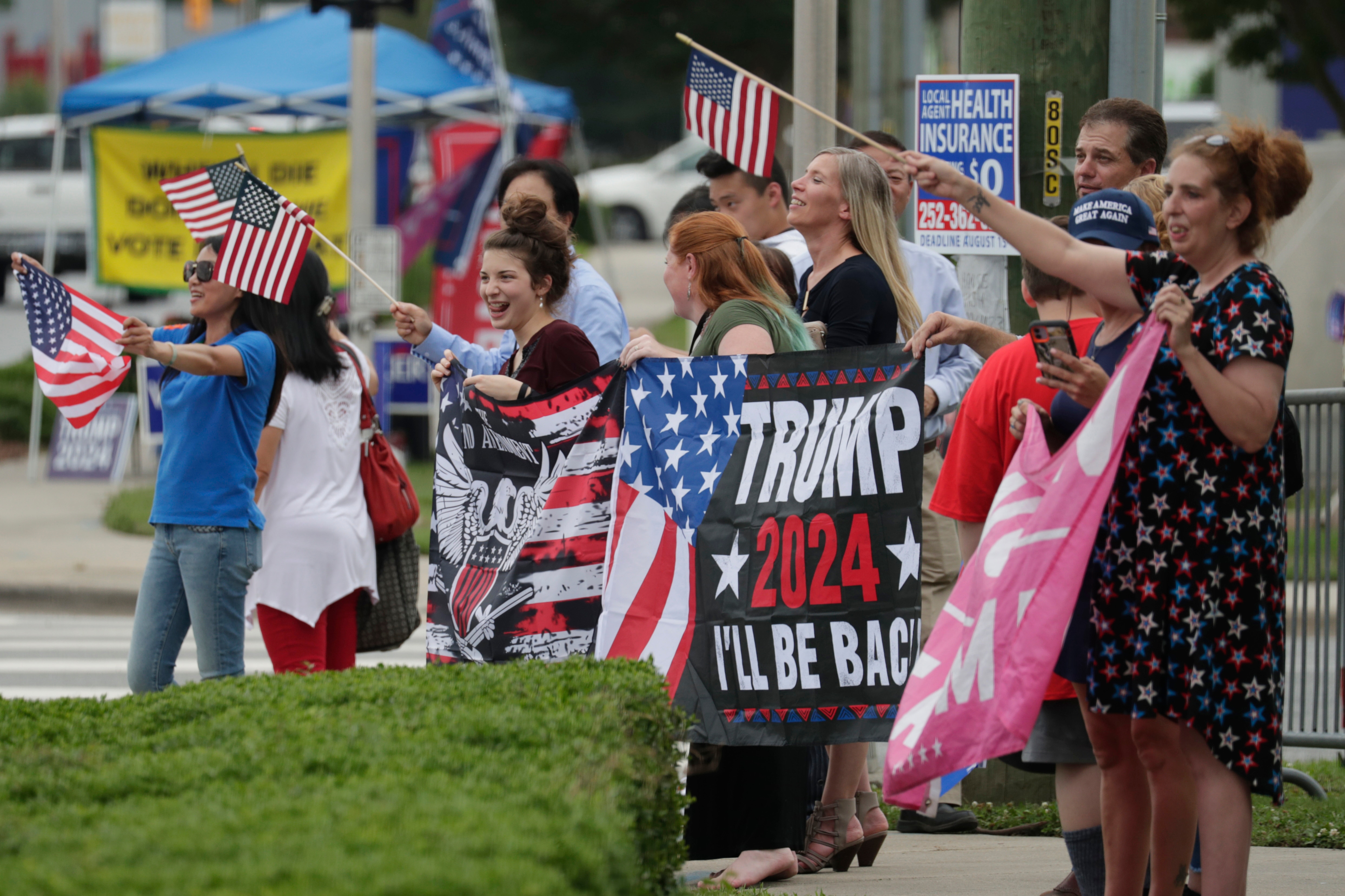 Supporters of former president Donald Trump cheerbefore he speaks at the Republican Convention on Saturday, 5 June, 2021, in Greenville, North Carolina.

Banished from social networks but no less influential among the party faithful, Mr Trump has remained politically active since he left the White House in January.

On Saturday, he dismissed Facebook’s recent announcement his ban would be for two years for violating its rules over the deadly attack by his supporters on the US Capitol.

“I’m not too interested in that they may allow me back in two years… so unfair,” he said.

Again airing his false claims that election fraud denied him rightful victory last year, he said that “there’s no better example of the Democrat and media corruption than the 2020 election hoax… That election will go down as the crime of the century.

“If you think people don’t see it. People see it,” he told the crowd, which included at least one woman wearing a “Trump won” cap.

Out of office and off social media, Mr Trump now fires out a stream of incendiary statements by email – supporting chosen Republican candidates, launching vitriolic attacks on perceived enemies and relishing the role of king-maker when meeting with allies and party leaders. 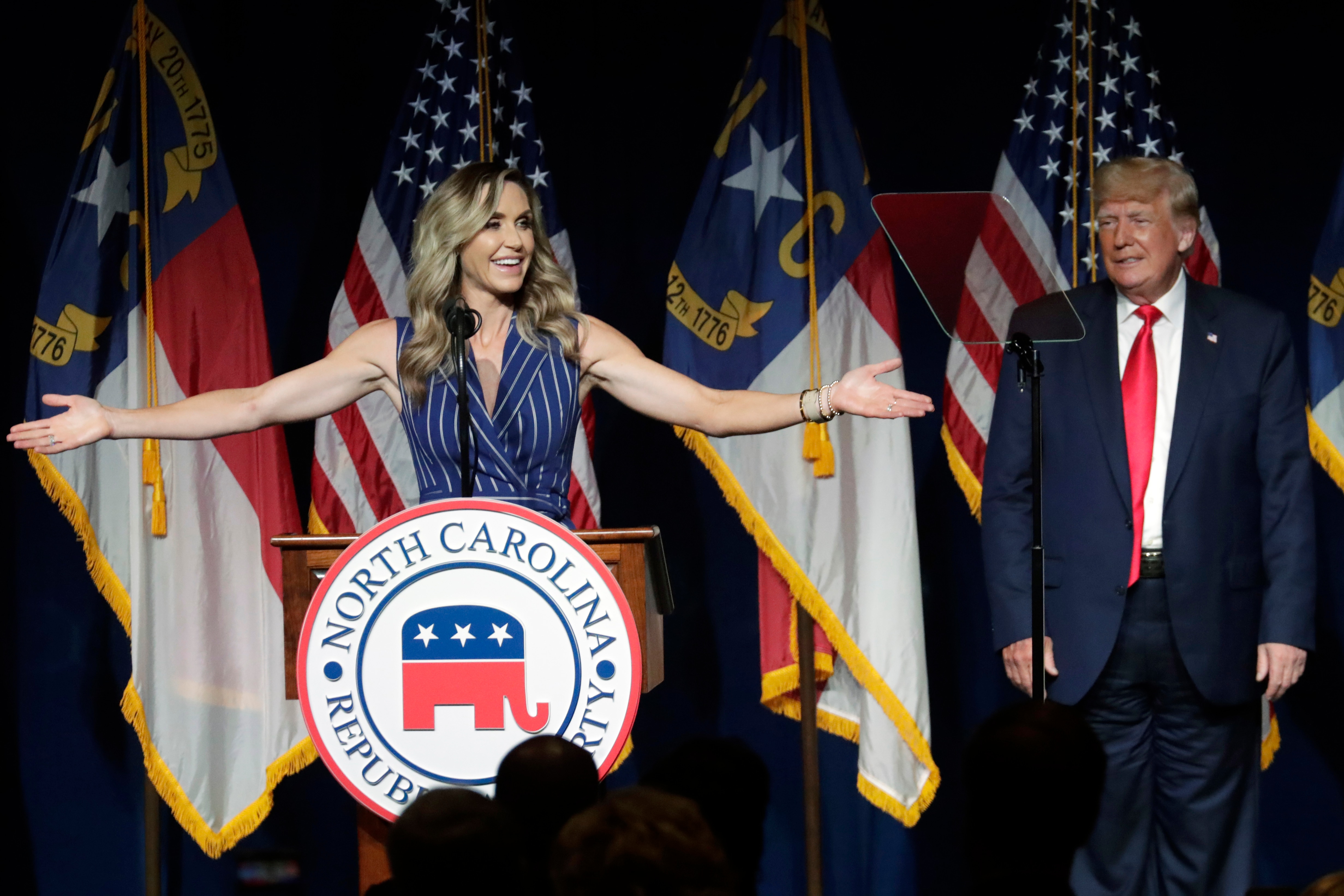 During the speech, his daughter-in-law Lara Trump came on stage to announce she would not be running for a Senate seat after speculation of political ambitions that could still establish a political dynasty.

Mr Trump, a billionaire businessman, has openly floated the idea of running for president again, but he is not expected to make any definitive announcement soon.

Only a handful of Republicans have dared break with him, despite the 6 January assault on the Capitol by supporters mobilised by his baseless allegations of election fraud.

Many Republicans still see him as a valuable asset ahead of the midterms in November 2022, when the party hopes to wrest back control of Congress from the Democrats.

The Democrats responded to Mr Trump’s appearance by saying “more than 400,000 dead Americans (from COVID-19), millions of jobs lost, and recklessly dangerous rhetoric is apparently not enough for Republicans to break with a loser president.”

His enduring influence further adds to his unique political journey, considering that he was defeated after a single term – and was twice impeached.

Mr Trump spoke for about 90 minutes on Saturday and, in coming months, is expected to again hold the big election rallies that he thrives on.

For many Republicans, the party’s focus in the midterm campaigns should be a sharp critique of Mr Biden.

But Mr Trump seems unable to let go of his theory – debunked by scores of judges and state officials – that the last election was stolen from him.

Nearly five months after leaving the presidency, and now comfortably installed at his Bedminster golf resort near New York, Mr Trump has yet to explicitly acknowledge his defeat.