The Group of Seven said it would back a minimum global corporation tax rate of at least 15 per cent, and put in place measures to ensure taxes were paid in the countries where businesses operate.

Mr Sunak said the deal would create a level playing field for companies around the world. 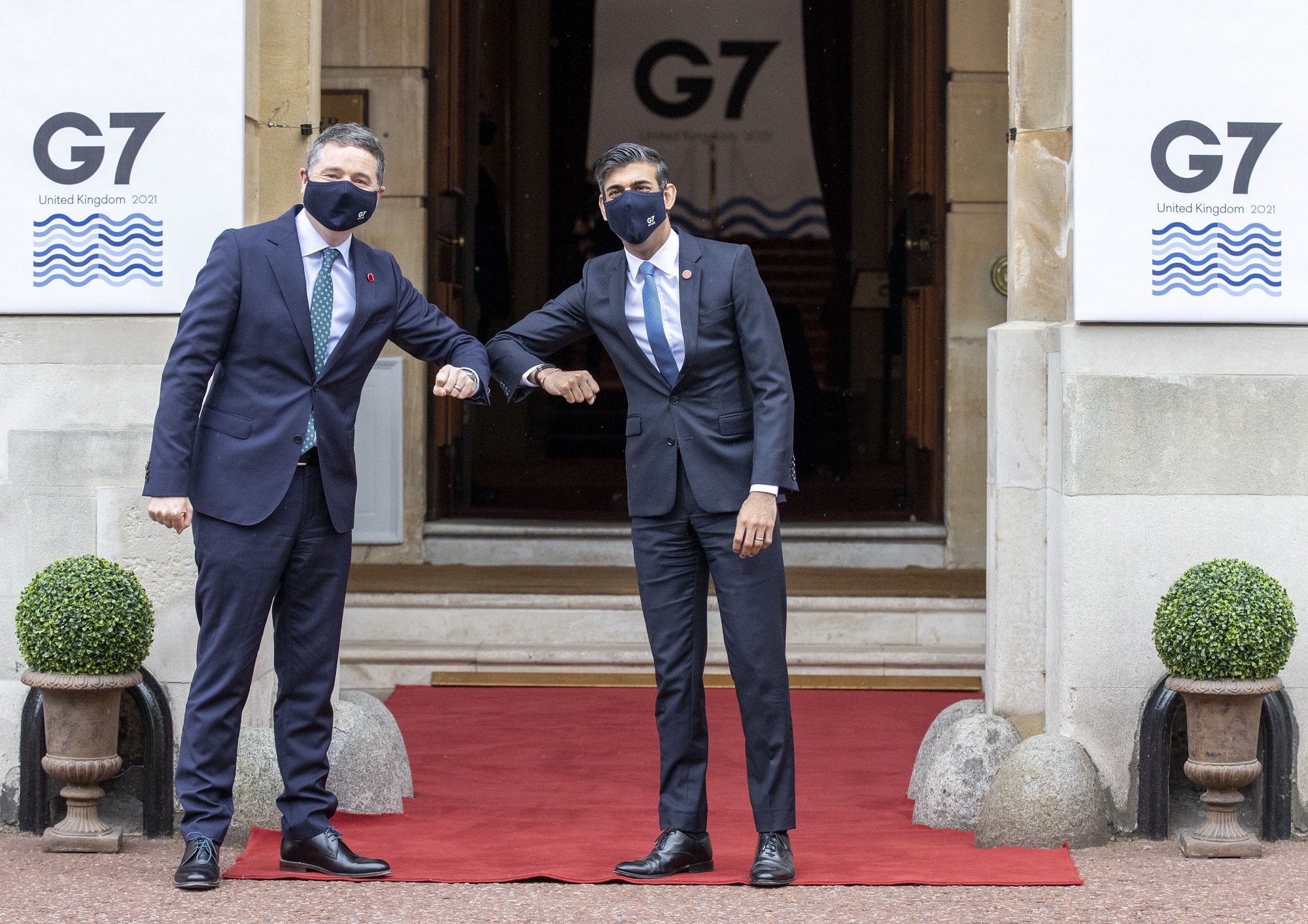 Chancellor of the Exchequer Rishi Sunak (right) welcomes Paschal Donohoe from the Euro Group, to the G7 finance ministers meeting at Lancaster House in London.

“After years of discussion, G7 finance ministers have reached a historic agreement to reform the global tax system to make it fit for the global digital age,” he told reporters.

The deal will put pressure on other countries to adopt a similar measure when leaders gather at a G20 meeting next month.

“Enterprises can no longer shy away from their fiscal obligations by cunningly transferring their profits to countries with opaque tax structures,” he said, calling the move “bad news for tax havens”.

Momentum has grown behind the US-led plans to limit the ability of multinationals like tech giants to game the tax system to boost profits, especially at a time when economies around the world are reeling from the impact of the coronavirus pandemic.

Ministers from the UK, Canada, France, Germany, Italy, Japan and the United States met face-to-face in London for the first time since the start of the COVID-19 pandemic.

According to a copy of the final agreement seen by Reuters, the G7 ministers said they would “commit to a global minimum tax of at least 15 per cent on a country by country basis”.

“We commit to reaching an equitable solution on the allocation of taxing rights, with market countries awarded taxing rights on at least 20 per cent of profit exceeding a 10 per cent margin for the largest and most profitable multinational enterprises,” the text added.

Along with its G7 and G20 partners, France wants “a more ambitious level of taxation”, the minister said, with the current pandemic crisis showing that “tax evasion, the race towards the lowest possible level of taxation, is a dead end”.

At the same time, Ireland has expressed “significant reservations” about Biden’s plan.

Its 12.5-percent tax rate is one of the lowest in the world, prompting tech giants such as Facebook and Google to make Ireland the home of their European operations.

The ministers also agreed to move towards making companies declare their environmental impact in a more standard way so investors can decided more easily whether to fund them, a key goal for Britain.

Rich nations have struggled for years to agree a way to raise more revenue from large multinationals such as Google, Amazon and Facebook, which often book profits in jurisdictions where they pay little or no tax.

Proponents argue that a minimum tax is necessary to stem competition between countries over who can offer multinationals the lowest rate.

They say that a “race to the bottom” saps precious revenues that could go to government priorities like hospitals and schools.

Corporate tax is one of two pillars in efforts for global fiscal reform, the other being a “digital tax” to allow countries to tax the profits of multinationals headquartered overseas.

Britain wants multinationals to pay taxes that reflect their operations, as governments seek to repair finances battered by slashed tax receipts plus vast spending and borrowing during the pandemic.

‘Do it for those you love’: Jacinda Ardern gets COVID-19 vaccination and appeals to Kiwis to follow suit