Australia’s home affairs secretary has declared the global “drums of war” are beating, and Australia must prepare for regional conflict.

Summary show
Mike Pezzullo said Australia must strive for peace, but not at the cost of its liberty.
Home Affairs Minister Karen Andrews confirmed she read the “powerful” speech in advance.
‘Hyper-excited language’
Mr. Pezzullo is widely tipped to become the next secretary of the Department of Defence.

Mike Pezzullo said Australia must strive for peace, but not at the cost of its liberty.

“In a world of perpetual tension and dread, the drums of war beat – sometimes faintly and distantly, and at other times more loudly and ever closer,” he told department staff in an Anzac Day message. “Today, as free nations again hear the beating drums and watch worryingly the militarisation of issues that we had, until recent years, thought unlikely to be catalysts for war.

“Let us continue to search unceasingly for the chance for peace while bracing again, yet again, for the curse of war.” His comments come as Australia’s relationship with China grows increasingly fractious, with Defence Minister Peter Dutton expressing concerns about Beijing’s stance on Taiwan.

“The overarching message from government is that we need to be alert but not alarmed,” she told Nine on Tuesday. “We’re obviously very conscious as a government of what is happening in the Pacific region, in particular, and we will always put Australia first, second, and third.”

“By all means, we need to stand up for our trade, stand up for rule rights, but language like ‘drums of war’, I think that is pretty hyper-excited language,” he told Nine.

“I am not sure our senior public servants should be using that language because I am not sure what that actually helps, except cause more anxiety.”

Mr. Pezzullo is widely tipped to become the next secretary of the Department of Defence.

His Anzac Day message invoked the words of two US generals and reflected on Australia’s ANZUS alliance with the United States.

‘We will not take a punt on this’: Alice Springs to plunge into three-day lockdown amid miner scare 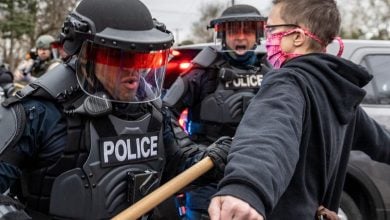