The home affairs minister has rejected calls for the federal government to reduce international arrivals as the country deals with several coronavirus outbreaks.

Karen Andrews hit back at comments from state leaders who have criticised the Commonwealth’s overseas arrivals policy and called for a reduction in passenger caps, accusing Queensland Premier Annastacia Palaszczuk of creating a distraction from her own state’s quarantine failures.

“We need to learn to live and to work in the COVID environment in which we find ourselves,” she told reporters on the Gold Coast on Wednesday.

“The first response should not be to close down our borders.”

Ms Andrews said weekly caps of about 1,000 passengers entering Queensland and 3,000 coming to NSW were not large.

Outbreaks of the highly contagious Delta variant have plunged more than 12 million Australians into lockdown across several states and territories.

Claims the borders ‘are not genuinely closed’

Earlier on Wednesday, Queensland’s premier and her deputy, Steven Miles, criticised the federal government for letting an unvaccinated traveller make repeated trips between Australia and Indonesia.

Mr Miles said genomic sequencing had confirmed that person has passed on the Delta variant to a 19-year-old worker at Prince Charles Hospital in Brisbane.

“[That traveller] had been allowed to come and go between Australia and Indonesia repeatedly throughout this pandemic by the Morrison government,” Mr Miles said.

“They are not vaccinated, and they have been through our hotel quarantine several times.”

Mr Miles said the federal government is letting in thousands of people “who are not stranded Aussies”, and is also allowing thousands of other Australians to leave and then return for business and other non-critical reasons.

Ms Palaszczuk reiterated the country is “at a pressure cooker moment” and needed to tighten caps on people coming into Australia, while still allowing vulnerable people to return home. 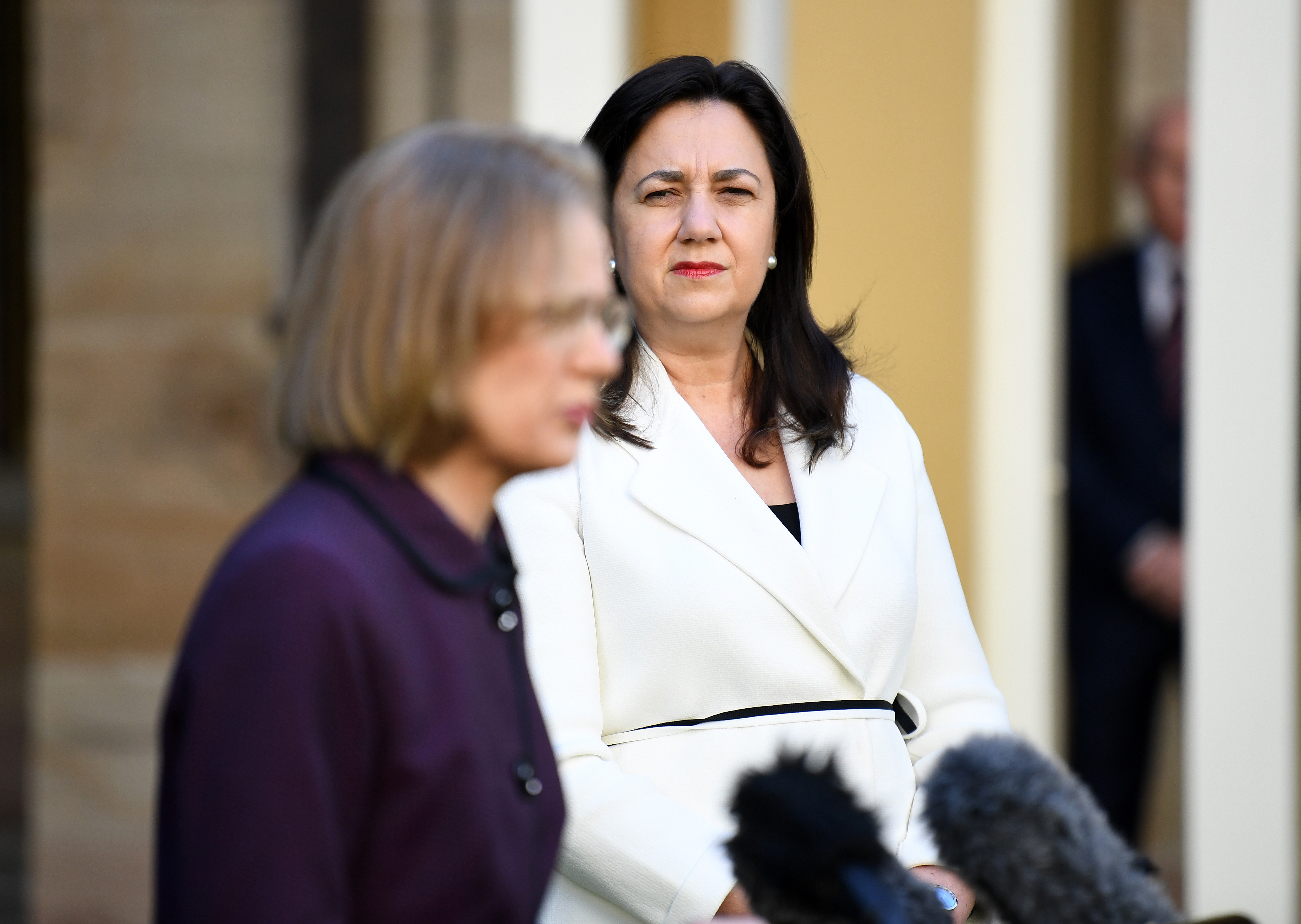 “But there’s a large number of people travelling overseas for business, for a whole range of reasons, and there’s questions that need to be answered about why they are not vaccinated [before] leaving, and also if people are coming to Australia, why are they not getting their vaccinations.

“It’s overseas arrivals bringing this Delta virus into our state. We have got to minimise the risk – we are at a pressure-cooker moment at the moment.”

WA Premier Mark McGowan believes the vast majority of people granted exemptions to travel overseas for work and study should not have been allowed to leave.

“They should stay home while there is a pandemic running wild around the world,” he told reporters in Perth.

He called for a tougher approach to granting permission to leave, with people inevitably wanting to return to Australia.

But Ms Andrews disputed assertions about the people who are coming into the country through quarantine, stating “Australia’s borders are closed”.

She said official Australian Border Force figures set out that on average, 80 per cent of returning travellers to Australia are citizens, permanent residents or immediate family members.

“So those are statistics that are known by the Australian Border Force because they know exactly who is coming in to this country. So they know what the statistics are,” she said, claiming the data has been misrepresented.

“Now, let’s be clear: some of the permanent residents who are coming back to Australia are also dual citizens and … in fact, some are known to be travelling on foreign passports. But the data from the ABF is correct,” she said.

Ms Andrews accused Ms Palaszczuk and Mr Miles of “trying to create a distraction from their own quarantine failures”.

“Clearly what Annastacia Palaszczuk is doing is making sure that she is doing as much as she possibly can to ensure that she puts up a smokescreen to hide the inefficiency and ineffectiveness of quarantine that is administered and managed by the Queensland government,” she said.

“New South Wales will always do our fair share as we have done. We do it without complaint,” she told reporters in Sydney.

Ms Berejiklian said about half of the people coming through Sydney ended up in other states.

“I’m interested that other premiers are complaining about what they have to do, but it’s far less to what New South Wales is doing.”

Victorian Health Minister Martin Foley questioned whether the lesser evil was having millions in lockdown or scaling back quarantine while the federal vaccine rollout improved.

“This would be take us in precisely the wrong direction,” he said.

The major employer group is suggesting home quarantine with strict conditions and additional capacity as ways to bring in more workers.

Australia’s rice farmers were counting on a huge harvest. Then the mice arrived