All of Greater Sydney will go into a two-week lockdown from 6pm on Saturday, as health authorities work to contain a “concerning” coronavirus outbreak and a growing list of exposure sites.

NSW Premier Gladys Berejiklian announced the extension of current lockdown measures after a crisis Cabinet meeting on Saturday, and as the state recorded 12 new locally-acquired infections.

Stay-at-home orders currently in place for four Sydney local government areas – Woollahra, Waverley, Randwick, and the City of Sydney – will apply to all people in Greater Sydney, including the Blue Mountains, the Central Coast and Wollongong, from 6pm on Saturday until midnight on 9 July.

“The NSW government has always prided itself on taking the expert health advice,” Ms Berejiklian said, following the Cabinet meeting.

“Even though we don’t want to impose burdens unless we absolutely have to, unfortunately this is a situation where we have to. I said that this is the scariest time since the pandemic started, and that’s proven to be the case.”

Weddings will not be permitted from 11:59pm on Sunday 27 June, while funerals will be limited to one person per four square metres with a cap of 100 people, and masks worn indoors.

Community sport will not be allowed during the lockdown period.

Ms Berejiklian urged people not to panic buy nor worry about their finances, with shops remaining open and the state government set to announce financial support in the coming days.

The COVID-19 Disaster Payment of up to $500 will be available for those in the original seven local government areas that were declared hotspots – City of Sydney, Waverley, Randwick, Canada Bay, Inner West, Bayside and Woollahra – on 1 July. The payment will kick in for eligible people in the extended areas three days later.

“It’s never easy when all of us have to face these circumstances, but we’re all in the same situation,” Ms Berejiklian said. “We’ve had to do this before. We know the drill.” 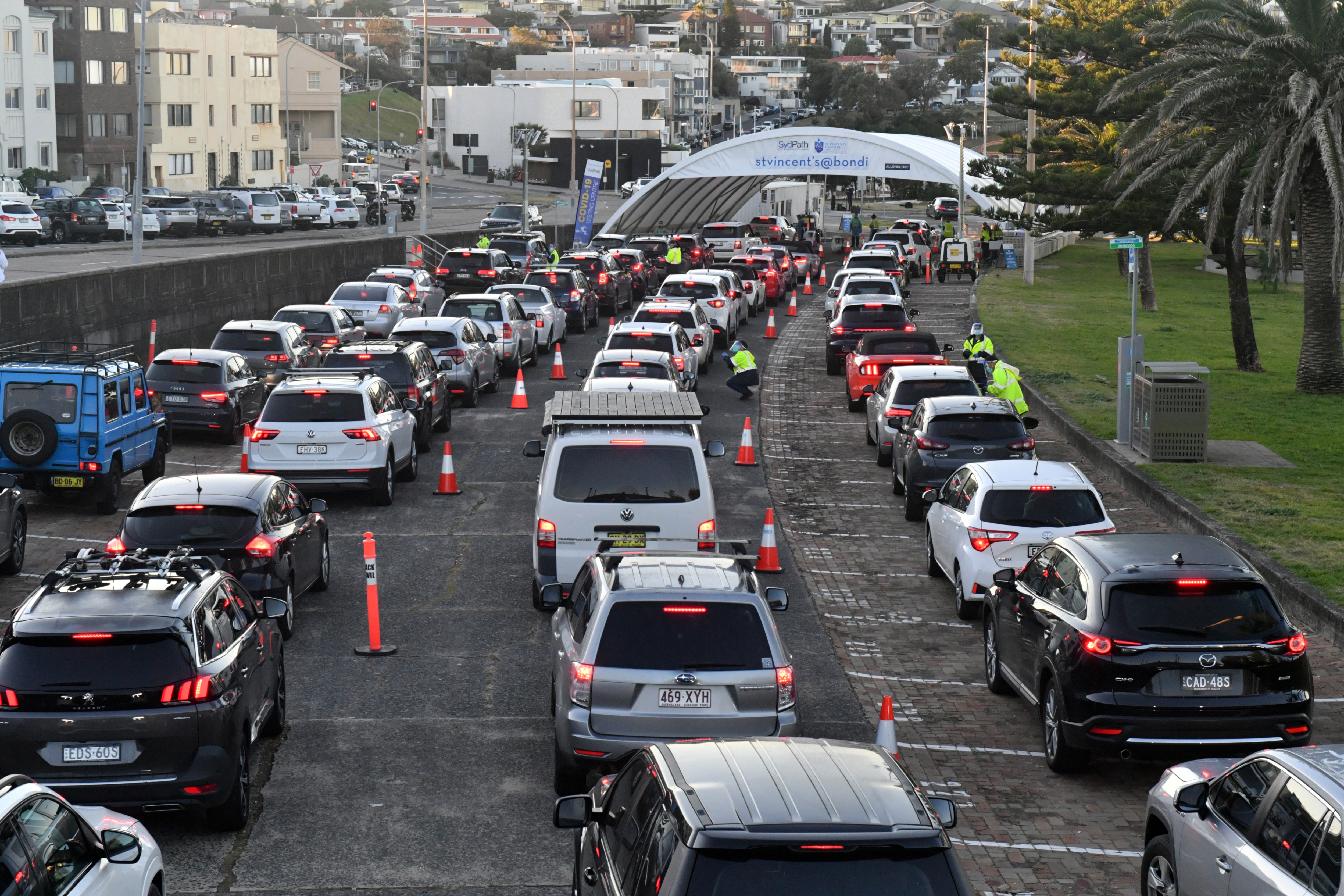 Members of the public wait to be tested for COVID-19 at a pop up clinic at Bondi Beach in Sydney, Saturday, 26 June, 2021.

Restrictions will also be in introduced for regional NSW to prevent any further seeding events of COVID-19 into the regions. Visitors to households will be limited to five guests – including children – and masks will be compulsory in all indoor non-residential settings, including workplaces, and at organised outdoor events.

The one person per four square metre rule will be re-introduced for all indoor and outdoor settings, including weddings and funerals, while outdoor seated, ticketed events will be limited to 50 per cent capacity.

Ms Berejiklian said a two-week lockdown is needed to get on top of community transmission of the highly-contagious Delta variant, but that health authorities will re-assess the situation after seven days.

“If after seven days there’s a dramatic change in the trend, we’ll obviously evaluate the situation,” she said.

“But I want to be very upfront with the public – this will be, for all intents and purposes, a two-week lockdown.

“The best advice from NSW Health is that we should brace ourselves for additional cases.”

Meanwhile, NSW Police on Saturday confirmed the driver who transported international flight crew, and who NSW Health considers the “index case” for the Bondi cluster, won’t be charged.

“Yesterday, I advised we had sent the case for urgent external legal advice due to the significance of this outbreak and the community concern,” Commissioner Mike Fuller said in a statement.

“I can now confirm we have received advice that there is insufficient evidence to establish that either the limousine driver or his employer breached any public health orders.”

The official case tally for Saturday was 29 infections, including 17 that were previously announced, out of over 55,220 tests. All but one of the new cases is linked to an existing cluster.

But the state’s chief health officer, Dr Kerry Chant, said only 12 of the 29 new cases were in isolation throughout their infectious period.

“The situation overnight has highlighted that an increasing number of people have been undetected and infectious in the community, and those exposure sites have spread,” Dr Chant said at an earlier press conference on Saturday.

“Largely they were contained in the four LGAs, but now we are seeing the spread to exposure venues outside of those four LGAs, and that is the basis for my growing concern.”

The list of exposure sites now includes venues in the Northern Beaches, Lakemba, Auburn, with another two train routes added on Friday night.

Two of the new cases were linked to Great Ocean Foods in the inner-west suburb of Marrickville. Anyone who worked at, attended or was a customer at the food wholesaler from 21 to 25 June, along with their household contacts, are considered a close contact and must immediately get tested and isolate for 14 days, regardless of the result.

Anyone who received a delivery from Great Ocean Foods during that time, along with their household members, must also immediately get tested and isolate until further advice from NSW Health.

NSW Health has also been notified of additional venues across Sydney visited by confirmed cases of COVID-19.

Anyone who attended Cheers Bar & Grill in inner-city Sydney between 1:45 – 3:30am on 20 June, or Rebel at Bankstown Shopping Centre between 3:45-4:30pm on 24 June must immediately get tested and isolate for 14 days, regardless of the result.

The Australian Medical Association had been calling for a broader lockdown of the entire Sydney basin, saying on Friday the current restrictions aren’t enough to combat the current outbreak.

“What we really need are clear rules for all of Sydneysiders that say ‘stay at home’ so we can get ahead of this virus and stop further transmission,” AMA President Dr Omar Khorshid said.

“The Delta virus is different; it is being transmitted far more easily and everyone has acknowledged that it is different. Sydney has not faced this before, and that means a different approach is required.”

Greater Sydney is entering a two-week coronavirus lockdown. Here's what you need to know