Labor is demanding the Morrison government provide a new set of target dates for the vaccine rollout, saying it has made a mess of the timetable so far.

But Health Minister Greg Hunt insists as the domestic supply of the AstraZeneca vaccine from CSL ramps up, so will the vaccine program. However, perhaps wisely, he is vague on the precise timetable. The daily rate of vaccinations increases with over 79,000 completed on Thursday, compared with 55,000 on Monday last week. But that brought the total number of Australians vaccinated to just 841,855, well short of the four million by the end of March once promised by Prime Minister Scott Morrison.

“The Morrison Government is making a mess of this vaccine rollout, and Australians expect and deserve clearer answers on when they are going to get the vaccine,” Labor’s health spokesman Mark Butler told reporters in Adelaide on Sunday. He said just 14 percent of those in aged care had received their two doses of the vaccine when that program was also supposed to be finished last week.

“Australians want to know when their loved ones who might be in aged care facilities are going to get vaccinated because they know they are the most vulnerable people in our community,” Mr. Butler said.

Mr. Hunt defended the progress made so far and is confident that everyone that wants to get vaccinated will have their first dose by October. He said there were three initial targets – to start the 1a Pfizer vaccinations in late February, commence the 1a AstraZeneca rollout in early March, and begin the 1b program on 22 March.

“The principal three targets in terms of those commencement dates started exactly as we intended, and then the other major goal for Australia is the end of October for all first doses,” Mr. Hunt told reporters in Melbourne.

Both sides of politics are accepting the advice of the nation’s health experts over the continued use of the AstraZeneca vaccine after a Melbourne man was admitted to hospital with a rare blood clotting disorder.

The Therapeutic Goods Administration is investigating this case and working with international experts and regulators. In the meantime, Mr. Hunt said anyone susceptible to blood clotting should seek advice from their GP before going ahead with the jab.

Mr. Hunt welcomed the news that there were no new locally-acquired virus infections on Sunday when there was the risk of a major outbreak in Queensland and NSW last week. One recent case among returned travelers already in quarantine of NSW, Queensland, and South Australia. 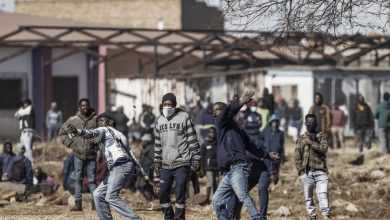