A man has died and two volunteers are in hospital after a storm front wreaked havoc through eastern Victoria.

Trees crashed onto homes, powerlines were cut and in the Gippsland area, flood warnings were issued.

Emergency services were called to Starlings Lane in Woodside about 1.45pm on Thursday after a member of the public discovered a vehicle almost submerged in floodwaters.

A rescue team found the man, possibly aged in his 60s, dead in the vehicle.

Victoria Police are investigating and will prepare a report for the coroner.

About 60 kilometres north, evacuation warnings remain in place as floodwaters are rapidly rising. With flooding expected to impact more than 220 homes, people have been told to travel to a safe location such as a family member or friend’s home.

A relief centre has been set up at the Traralgon Basketball Stadium for those with nowhere to go.

Traralgon Creek has risen to nearly six metres, although it is expected to fall below the major flood level of 4.8 metres on Thursday evening.

There are other active major flood warnings across the West Gippsland catchment including the Avon, Macalister, Thomson, and Latrobe rivers.

Those already in a safe place are urged to stay put for the next 48 to 72 hours, when most of the flooding is expected to move through communities. 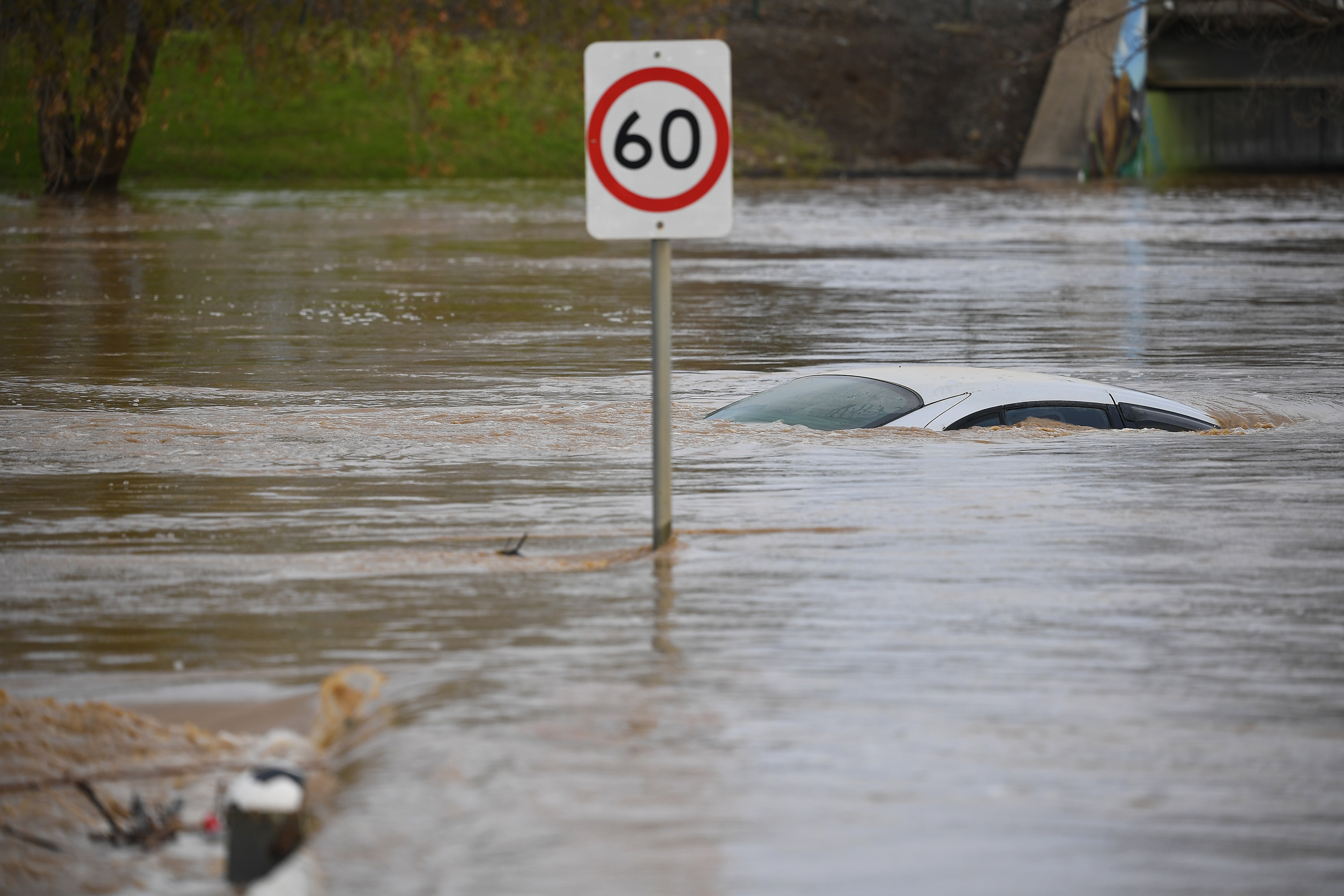 A car is seen submerged by flood water in Traralgon, Victoria, on Thursday, 10 June, 2021.

By lunchtime Thursday, emergency services had already been called to a dozen flood rescues in Gippsland.

“We can’t emphasise enough that driving into floodwaters is the greatest risk you can take,” Victorian SES chief Tim Wiebusch said.

“That is the number one thing where we see fatalities during flooding.”

The SES has responded to about 6000 calls for help and it’s expected to take days to clear the backlog.

Most of the calls were for fallen trees, though there were some for flash flooding and building damage.

At Sherbrooke east of Melbourne, an ambulance was crushed by a falling tree as it raced to where a woman and her son were trapped.

The paramedic was shaken but escaped injured, with the woman and her child later freed by police.

Two SES members were not so lucky and had to be taken to hospital with non-life-threatening injuries after separate tree-related incidents. They are in a stable condition. Downed powerlines are seen in Lilydale, Melbourne, on Thursday, 10 June, 2021.

“Many people would have woken up this morning and seen absolute carnage out there,” he said.

The wild weather has left more than 200,000 homes and businesses without power, closed major roads and suspended train services.

Late on Thursday, Powercor reported it had restored power to more than 70,000 of its customers, with more than 20,000 still waiting.

Victoria’s Emergency Management Commissioner Andrew Crisp said it could take a number of days to restore power in some areas.

Winds reached speeds up to 119km/h in mountain areas and 104km/h in Melbourne, but the severe weather warning for the Gippsland area was cancelled on Thursday afternoon as conditions moderated.

Mr Wiebusch said he had not seen a flood and wind weather event of this scale in Victoria since 2008.

Elsewhere, the NSW regional towns of Orange and Oberon have been transformed into winter wonderlands.

A cold snap to the north has brought widespread snow in the ranges, with the Perisher Valley receiving a dump of about half a metre.

The mercury in Sydney was only expected to reach 11C on Thursday as temperatures in some NSW areas dipped more than 10 degrees below average for this time of year, while Queensland shivered through unseasonable lows as well.