It’s been 14 years since Robyn and Stuart Mackenzie made an extraordinary find in the red dirt of their cattle station in outback Queensland. To the untrained eye, it would seem like nothing more than a collection of interesting rocks. But the Mackenzies knew better, and they now have scientific backing that what they stumbled across in 2006 is the largest species of dinosaur ever found in Australia.

The name has a rather grandiose ring to it. But it befits the behemoth that’s only just been scientifically described for the first time by paleontologists from the Queensland Museum and Eromanga Natural History Museum. 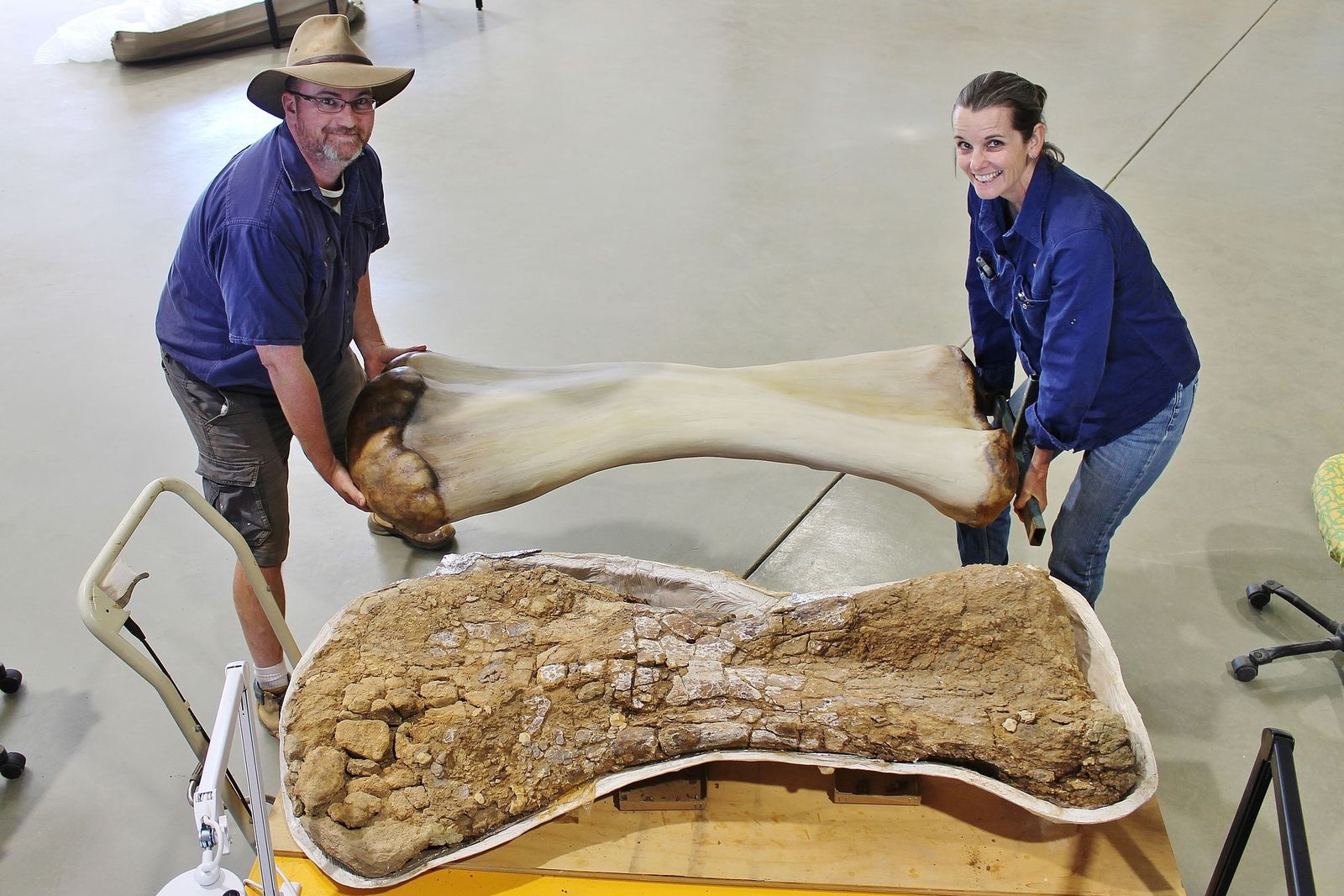 Scott Hocknull and Robyn Mackenzie with one of the fossils (bottom) and the 3D reproduction.

So far, three specimens have been found in the Eromanga area, a few hundred kilometers from Cameron Corner in Queensland’s southwest. It’s an area that could well be the next frontier of discovery in terms of Australia’s dinosaurs. Those three specimens have given scientists a handle on just how big this new species got, and titanic isn’t overstating things.

The southern titan’s estimated length was 25-30 meters – about the length of a basketball court. The distance from its toes and the top of its generous hips was 5 to 6.5 meters – roughly the height of a two-story house. Its mass was a little harder to estimate, but scientists say it could have weighed up to 74 tonnes – or about nine African elephants. Those impressive statistics put it in the top 10 to 15 most enormous dinosaurs ever found across the world, and for Australia, well beyond the middling species previously found here. 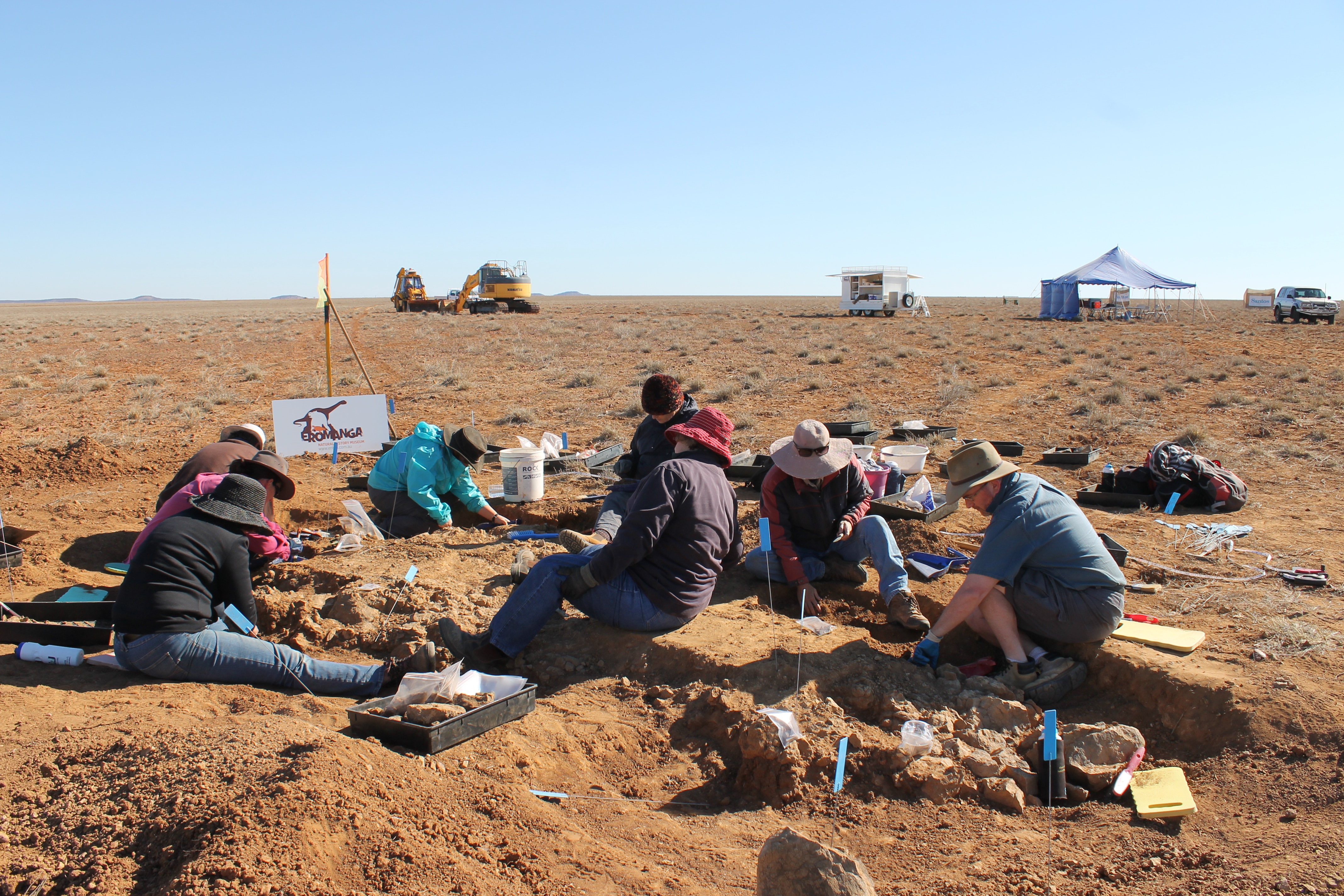 The dig for dinosaur bones in Eromanga, in Queensland’s outback.

Robyn Mackenzie is elated that so many years after she found the first southern titan, it finally has a name, a scientific description, and a place in the record books as far as Aussie dinosaurs go. But as the general manager of the Eromanga Natural History Museum, she’s some way off having a place to put it. The museum is yet to complete an oversized gallery to house a full-scale, 3D-printed skeleton she has ordered for public display.

The original bones – 92-96 million years old – were not in the best condition and will be carefully displayed elsewhere in the gallery. Having fundraised relentlessly to get the gallery built and make sure the southern titan remains where it was found, near Eromanga, she knows that a great gallery will be created. “It was essential for Stuart and me to make sure these discoveries remained in a context in our area,” Mrs. Mackenzie said. “In the past, they were moved, and places missed out on the social, economic, and scientific benefits of having discoveries remain in the region.” Queensland Museum paleontologist Scott Hocknull is excited about the future and believes the Eromanga area is only beginning to reveal its prehistoric secrets.

He says there are many skeletons found yet to be scientifically examined. Of particular interest is a rock shelf, almost 100 meters long, part of a trail where dinosaurs walked, trampling mud and bones into the soft ground. “Our ultimate goal is to find the evidence that tells the changing story of Queensland, hundreds of millions of years in the making. A grand story all scientists, museums, and tourists can get behind.”

If the Eromanga area does yield more secrets, Dr. Hocknull knows it’ll mean a tonne more work on the scale of what was required to ensure the Australian cooperensis was a new species.

That process involved comparing its bones to the bones of other species from Queensland and from across the world. That’s no easy task, given that dinosaur bones are enormous, heavy, and fragile.

And that’s where more 3D technology came in. The identification team used new technology to scan each bone and compare them to other bones for the first time.

“The scans we created allowed me to carry around thousands of kilos of dinosaur bones in a seven-kilo laptop. We can now share these scans and this knowledge online with the world.”

The scientific description of the Australian cooperensis has been published in the international journal Peer J.