Colombian President Ivan Duque announced he was deploying military troops to the city of Cali, as international alarm grows over the policing of deadly anti-government protests across the country in recent weeks.

Friday marked a full month of nationwide protests, which began over a proposed tax increase but have since morphed into a broader anti-establishment mobilization.

Three people died during protests in Cali on Friday, authorities said, bringing the officially reported toll over weeks of unrest to 49, two of them police officers.

After chairing a security meeting in the city, Duque announced “the maximum deployment of military assistance to the national police” would begin immediately.

The latest deaths occurred in clashes between “those blocking and those trying to get through” a barricade, Cali mayor Jorge Ivan Ospina said in a video posted to social media.

A representative from the Cali prosecutor’s office said an off-duty investigator had shot at the crowd, killing a civilian, before being lynched by protesters.

Video footage showed a man lying in a pool of blood and another nearby wielding a gun, who was then attacked by a group of people. 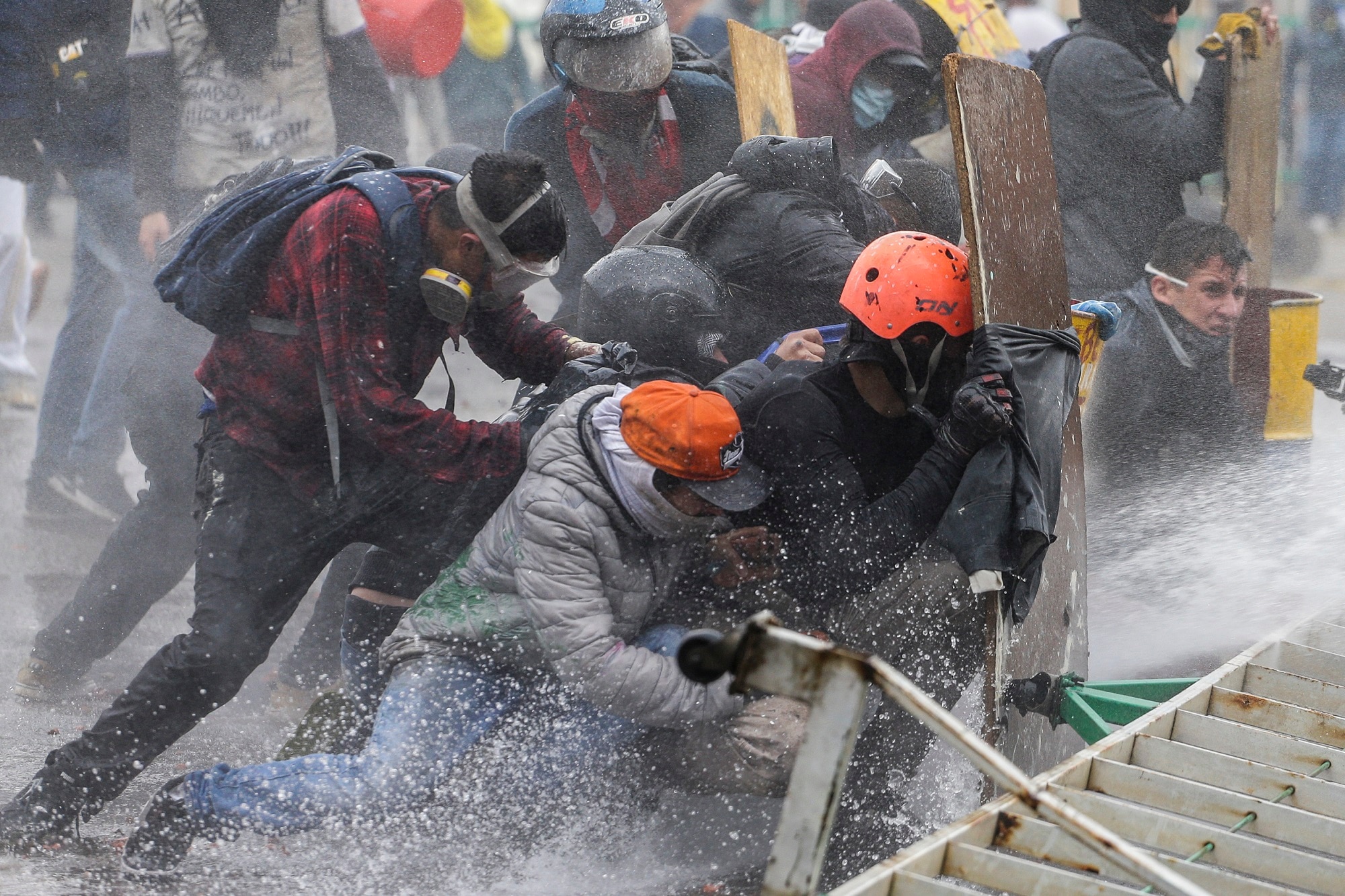 Anti-government protesters take cover from a police water cannon during clashes in Madrid, on the outskirts of Bogota, Colombia.

Ospina said he regretted what he described as an “insane situation of death and pain.”

“We cannot allow these circumstances to keep happening in Cali. We must not fall into the temptation of violence and death,” he added.

Human Rights Watch, which puts the death toll higher than the official one, at 63, said the situation in the city of 2.2 million was “very serious.”

About 2,000 people have been reported injured, and more than 100 people reported missing as a result of the unrest.

The US diplomat “expressed his concern and condolences for the loss of life during recent protests in Colombia and reiterated the unquestionable right of citizens to protest peacefully,” according to spokesman Ned Price.

Blinken also “welcomed the national dialogue President Duque has convened as an opportunity for the Colombian people to work together to construct a peaceful, prosperous future.”

But two weeks of negotiations to end the unrest have yet to bear fruit.

In order to move forward, protest leaders insist the government must acknowledge abuses by the police and armed forces.

But Bogota, while conceding individual bad apples, claims leftist guerrillas and dissident FARC fighters have infiltrated the demonstrations to foment violence and vandalism. 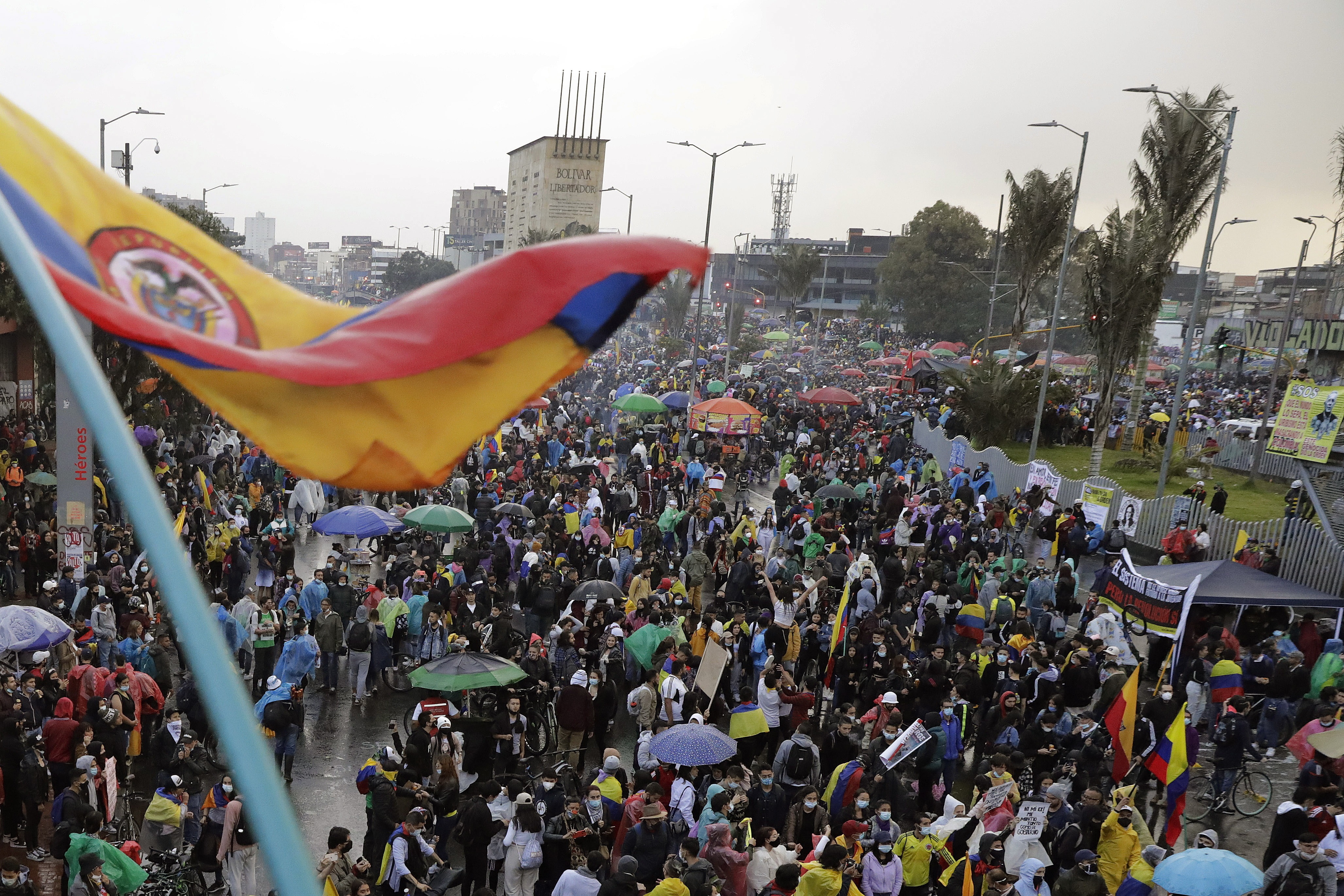 Thousands of Colombians gather at the Monument to the Heroes to mark one month of protests against the government and police violence, in Bogota, Colombia.

On Thursday the Colombian Senate threw out a motion of censure against the defense minister, under whose remit the police falls.

For more than 50 years, Colombia’s war against FARC guerrillas eclipsed all government priorities, with the state emerging from the conflict militarily strong, but weak on social redress.

Analysts have blamed its militarized background for the government’s response to the protests.

“This month the force of the state has become visible, how it acts” against citizens, said Gustavo Pena, a 22-year-old university student who was marching in Bogota.

“And I am proud because my country finally has dignity, and is standing up not to ask for anything free, but for opportunities, so there is not such an unequal distribution” of resources, he added to AFP.

The civil war also left the country with a massive income gap and Latin America’s largest informal work sector, according to the World Bank.

In 2019, the year after Duque took power, students took to the streets demanding free and more accessible public education, better jobs and a supportive government.

The coronavirus outbreak put an end to that without Duque having to make major concessions.

But on April 28, fury at a proposed tax increase on the middle classes led people onto the streets again.

Though the reform was quickly withdrawn, it had triggered a broad anti-government mobilization by people who felt they were left to fend for themselves in the health crisis, and who were further angered by the heavy-handed response of the security forces.

Like elsewhere in the world, the pandemic plunged Colombia’s most vulnerable people deeper into despair, with 42.5 percent of the country’s 50 million people now living in poverty with little state help.

Mostly peaceful protests by day have often turned into riots at night and running battles with the armed forces.

Due to leave office in 2022, Duque is now weighing between a “repressive or negotiated exit” from the challenge to his government, said analyst Hernando Gomez Buendia.

Base wants to help you end your frustrating health problems