Myanmar’s junta released 23,184 prisoners from jails across the country on Saturday under a New Year amnesty, a Prisons Department spokesman said, though few if any democracy activists arrested since a February coup were thought to be among them. Saturday is the first day of the traditional New Year in Myanmar and the last day of a five-day holiday, usually celebrated with visits to Buddhist temples and rowdy water throwing 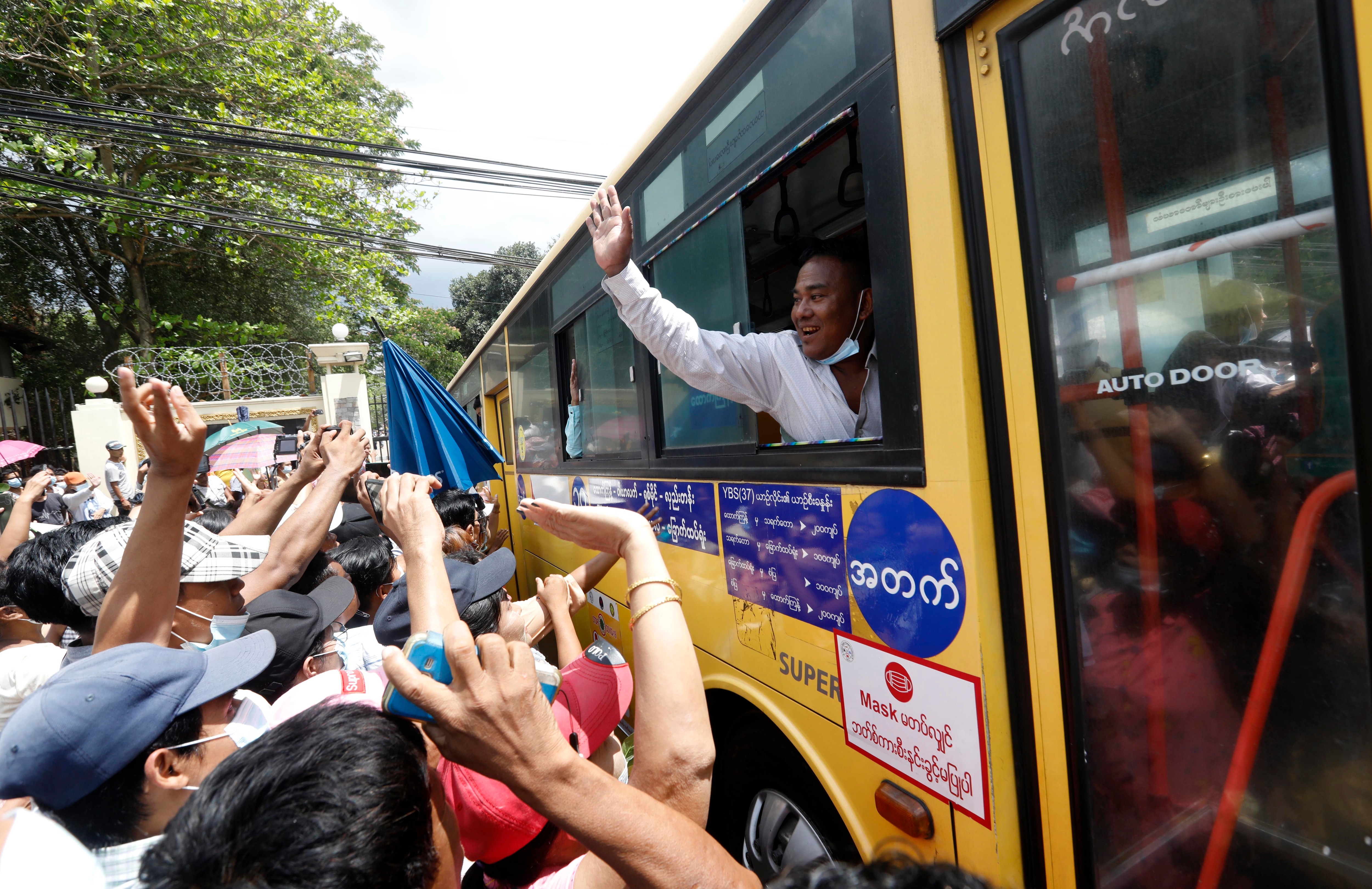 and partying in the streets. Pro-democracy activists called for the cancellation of the festivities this year and instead for people to focus on a campaign to restore democracy after the military’s ouster of the elected government of Nobel laureate Aung San Suu Kyi. Ms. Suu Kyi is among 3,141 people arrested in connection with the coup, according to a tally by the Assistance Association for Political Prisoners (AAPP) activist group.

“These detainees are mostly from before Feb. 1, but there are also some who were imprisoned after,” Prisons Department spokesman Kyaw Tun Oo told Reuters by telephone.

Asked if any of those being freed might have been detained in connection with the protests against military rule, he said he did not have details of the amnesties.

While the military was freeing the thousands of prisoners, it was also seeking 832 people on warrants in connection with the protests, the AAPP said.

Released prisoners from the bus to greet their relatives and friends after being granted amnesty outside the Insein Prison in Yangon, Myanmar, on Apr. 17.

Summary show
EPA via AAP
A spokesman for the junta did not answer calls seeking comment.
Rough road
EPA via AAP
EPA via AAP

Among them are 200 people, including several internet celebrities, actors, and singers who have spoken out against the coup, wanted on a charge of encouraging dissent in the armed forces, which can carry a three-year jail term. Two of them, the married couple of film director Christina Kyi and actor Zenn Kyi, were detained at the airport in the central city of Yangon on Saturday as they were trying to leave on a flight to Bangkok, the Irrawaddy news site reported.

A spokesman for the junta did not answer calls seeking comment.

Myanmar has been in upheaval since the coup, which the military defended with accusations of fraud in a November election won by Ms. Suu Kyi’s party. However, the election commission dismissed the objections. The ousted government had held power for the first five years of civilian rule since nearly half a century of army control ended.

People infuriated by the return of military rule have taken to the streets day after day to demand the restoration of democracy, defying crackdowns by the security forces in which 728 people have been killed, according to the AAPP’s latest figures.

Political leaders, including ousted members of parliament, announced the formation of a National Unity Government (NUG) on Friday, including Ms. Suu Kyi and leaders of the anti-coup protests and ethnic minorities.

The NUG says it is the legitimate political authority and has called for international recognition. During an anti-military coup protest in Mandalay, Myanmar, demonstrations demonstrate a banner on Apr. 17, 2021.

The junta has yet to comment on the unity government but has said it will hold a new election within two years and hand power to the winner.

The NUG’s vice president, Duwal Sheila, an ethnic Kachin lawyer, said the road to replacing military rule with democracy would be rough in a New Year message.

“We pledge to continue working with all ethnic peoples to overthrow the military dictatorship and establish a new federal democracy,” he said.

The media reported that protesters took to the streets in the second city of Mandalay in support of the NUG. 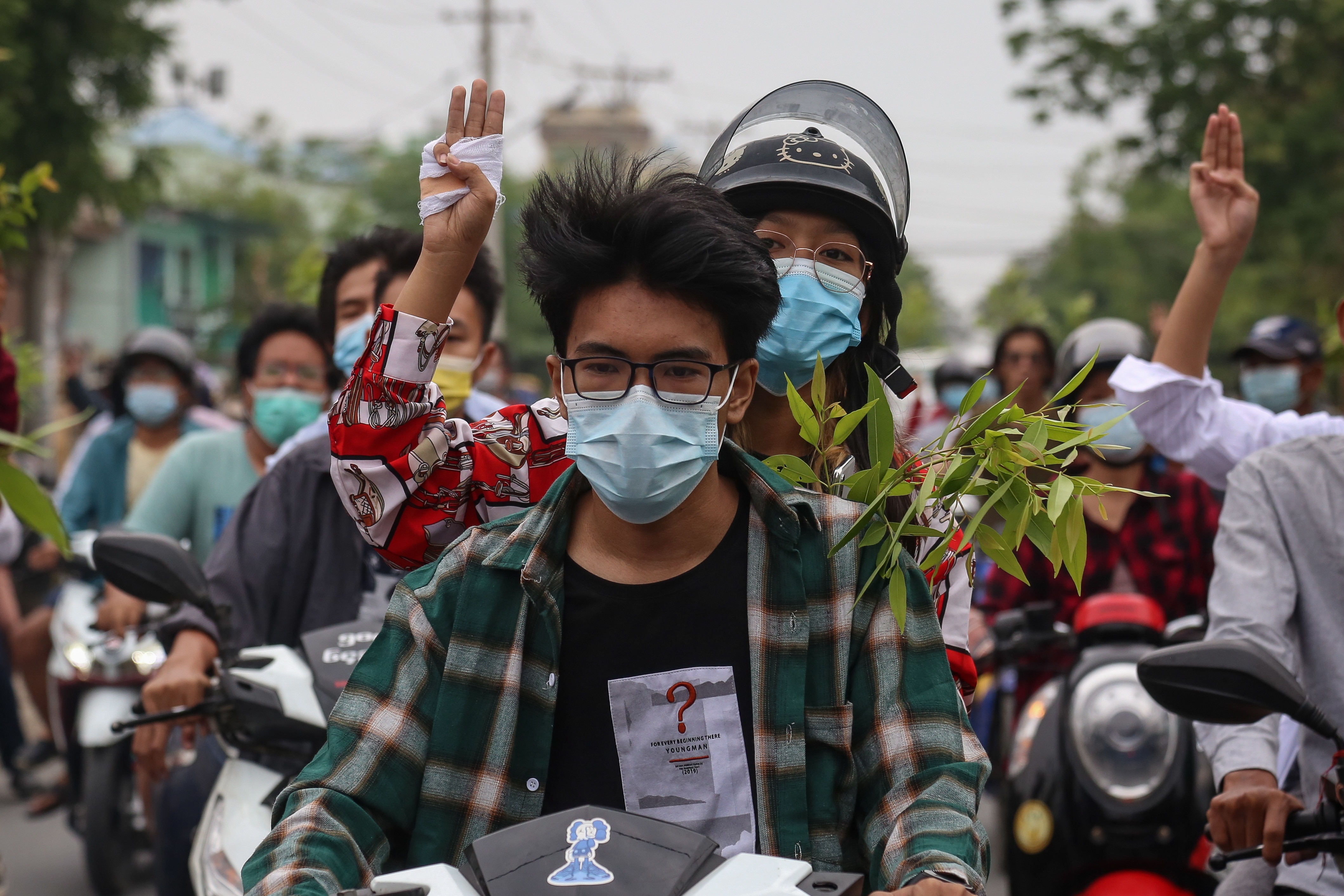 During an anti-military coup protest in Mandalay, Myanmar, demonstrators flash the three-finger salute on Apr. 17, 2021.

The coup has also triggered clashes between the army and ethnic minority insurgent groups in the north and east. On Saturday, fighters from the Kachin Independence Army attacked an airbase in the north with rockets or shells, one of which hit a nearby village house, injuring one person, the Mizzima news agency reported. Ms. Suu Kyi faces various charges, including violating an official secrets act that could see her jailed for 14 years. Her lawyers dismiss the charges. 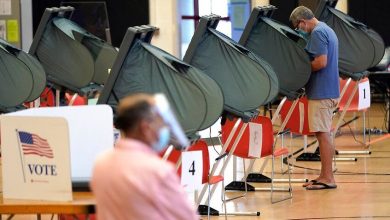 US Republicans seek to empower poll watchers, raising concerns voters of colour will be intimidated