Gathering limits and compulsory mask rules will also be extended until midnight on Friday, 2 July, for the rest of Greater Sydney, including the Central Coast, Blue Mountains, Wollongong, and Shellharbour.

The Commonwealth has extended its hotspot declaration for the City of Sydney, Waverley, Bayside, Canada Bay, Inner West and Randwick to cover the same period, paving the way for eligible Sydneysiders affected by restrictions to access COVID-19 disaster payments.

Authorities hope the new restrictions will slow the outbreak, which NSW Premier Gladys Berejiklian has described as the “scariest” period for the state since the beginning of the pandemic.

From 11.59pm on Friday, anyone who lives or works in the local government areas of Woollahra, Waverley, Randwick, and City of Sydney will only be able to leave their homes for essential reasons.

These include: to buy essential supplies, for work or study if it cannot be undertaken from home, to receive or give care, and for outdoor exercise in groups of 10 people or fewer.

The restrictions will remain in place until midnight on 2 July.

At this stage, there are no curfews or restrictions on when people under the stay-at-home orders can leave the house.

People should also limit non-essential travel to the affected areas.

Anyone who lives or works in the above-mentioned areas plus the local government areas of Canada Bay, Inner West, and Bayside are also barred from leaving metropolitan Sydney for any non-essential reason.

Health authorities have also asked residents across Greater Sydney who are not under stay-at-home orders to limit unnecessary activity and avoid large gatherings.

Visitors to households are limited to five guests, including children, for residents outside of the locked-down areas in Greater Sydney, the Central Coast, Blue Mountains, Wollongong and Shellharbour.

There is no daily limit to the number of visitors you can have at your home per day, as long as the number doesn’t exceed five at any one time. Overnight stays are also permitted as part of a visit. 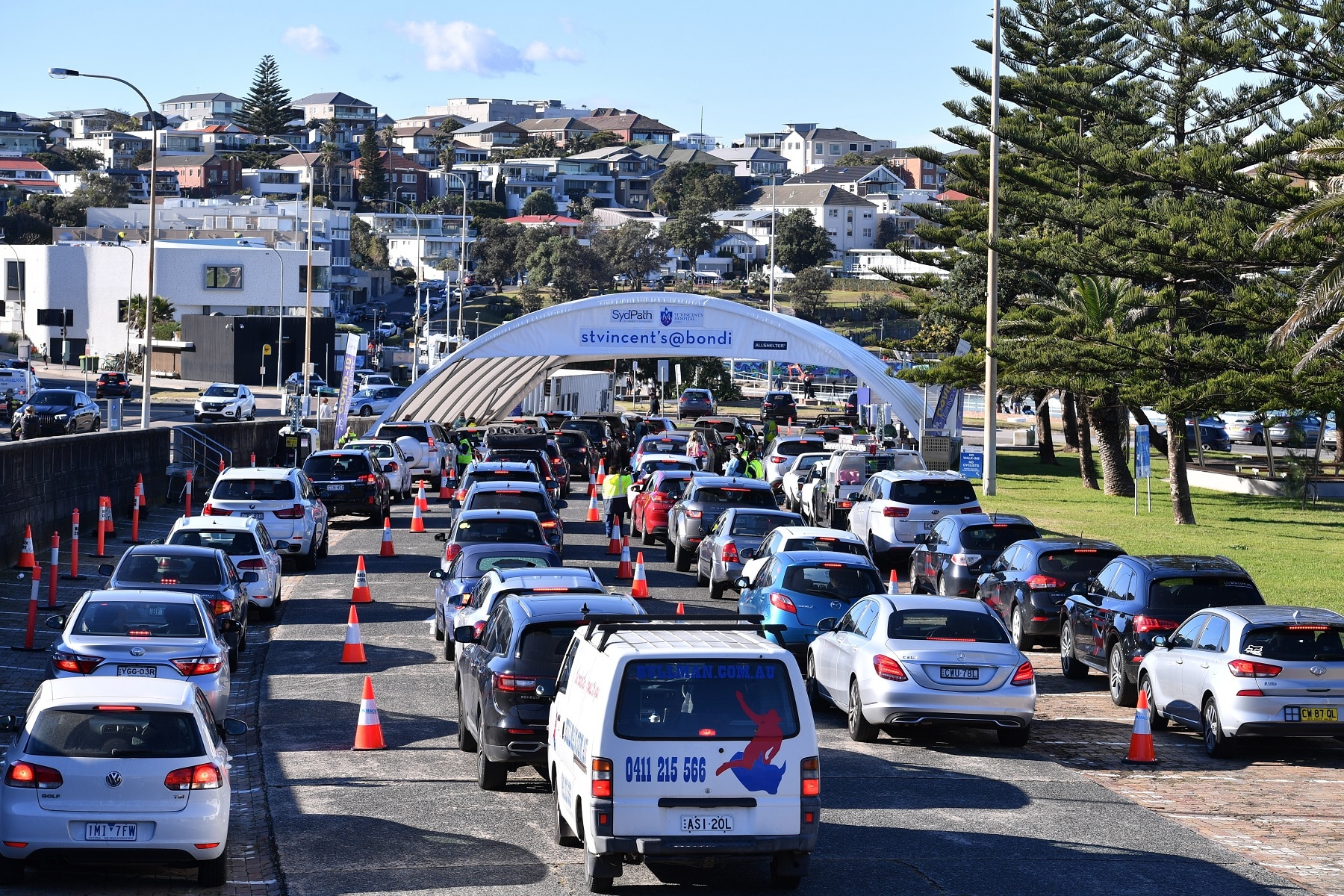 Cars line up for COVID-19 testing at Bondi in Sydney.

Outdoor seated events can go ahead, but at 50 per cent activity.

The “one person per four square metre” rule has been reintroduced for all indoor and outdoor settings.

Face masks are compulsory in indoor non-residential settings where patrons are not eating or drinking.

Restrictions for bars, restaurants, and clubs

Singing and dancing at indoor venues, outside of the four local government areas, has been outlawed. Patrons are also required to remain seated while drinking.

“We don’t want any mingling,” Ms Berejiklian said. “All people must be seated in any setting”.

Singing has also been banned in religious and worship settings.

Dance and gym classes are limited to 20 people, who are also required to wear a mask for the duration of the activity.

People working out at gyms individually are not required to wear a face mask.

Some changes to weddings and funerals

Dancing is still permitted at weddings for the bridal party only, which must not exceed 20 people.

The “one person per four square metre” rule also applies to weddings and funerals.

All states and territories have introduced travel restrictions in response to the Sydney outbreak.

Victoria has declared the City of Sydney, Waverley, Woollahra, Bayside, Canada Bay, Inner West, and Randwick local government areas red zones under their travel permit system, barring people who have recently been in the areas from travelling without an exemption.

Queensland has applied similar rules to people in Greater Sydney, the Central Coast, Blue Mountains, Wollongong and Shellharbour, while South Australia has introduced a travel ban for anyone who has been in New South Wales since June 11 (baring border communities).

Western Australia has also closed its border to travellers from NSW.

The Northern Territory has declared Greater Sydney a hot spot, forcing arrivals from these areas to undergo a 14 day supervised quarantine, and Tasmania has banned travellers from high-risk local government areas from entering the state without an exemption.

New Zealand has also suspended the trans-Tasman bubble arrangement in response to the recent outbreak.