NSW’s coronavirus press conference has been thrown into chaos by a protester declaring that he is “God”.

NSW’s coronavirus press conference ended in bizarre scenes on Monday after a protester calling himself “God” attempted to approach Police Commissioner Mick Fuller to serve him a “cease and desist” notice.

The bearded man, identified as Sean Alun-David Thomas, was dragged away from the podium by officers. TV networks cut out as it became clear the press conference had been hijacked.

“I have a question for you,” Mr. Thomas said as Mr. Fuller finished answering a journalist’s question.

Did you receive my notice of cease and desist?

“Sorry, sorry, no, no – you were served,” Mr. Thomas said, approaching the podium holding a Manila folder.

“You were served a notice of cease and desist last year,” Mr. Thomas said. “I captured everything. I am the prime creator of this earth.”

A copy of the “cease and desist” notice was handed was to the media.

On Facebook, he talks about the spiritual act of sungazing to reach self-realization, and posts content related to the universe, chakras, and becoming a galactic society. 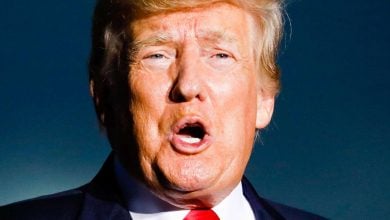 Biden’s meeting with Putin was like a ‘Monty Python sketch’