Prime Minister Scott Morrison has denied Australia’s travel ban on people returning from India is racist, amid mounting fallout over the government’s decision to make it illegal for those stranded abroad to return home.    There has been rising anger in the Indian community and backlash from human rights advocates over restricting travel from India. The country is ravaged by a mass outbreak of coronavirus infections. Mr. Morrison on Monday defended the response as he addressed the temporary travel ban for the first time since the decision was made late last Friday to criminalize those who try to return home from India.

He had been asked about accusations the policy is racist, which some in the Indian-Australian community have raised concerns about. “There is a raging pandemic, and we need to just continue to take decisions that are in the best health interests of Australia,” Mr. Morrison told 2GB Radio.

“This is a temporary arrangement – it is being put in place to ensure we don’t get a third wave here in Australia and that our quarantine system can remain strong.”

Last Friday, it was revealed that Australian citizens and residents failing to comply with the emergency determination under the Biosecurity Act could attract a $66,600 fine or a five-year jail term.

The government has put the travel restrictions to India until 15 May and promised the measures will be reviewed ahead of this deadline.

But the move to publicly announce Australians trying to return home could face criminal penalties has been widely criticized, with opponents pointing to the fact no travel ban was ever imposed on travelers returning from the United States or United Kingdom travelers at the peak of their outbreaks.

Mr. Morrison said the decision to impose the public health order would not be misused by the government.

“I understand the measures have strong sanctions with them – we’ve had the Biosecurity Act in place now for over a year, and no one has gone to jail,” he said.

“There hasn’t been any irresponsible use of those powers. My heart breaks for the Indian community – but I assure them I am going to restore those repatriation flights.”

Around 9,000 Australians in India are currently registered with the Department of Foreign Affairs and Trade as wanting to return home, including about 650 who are classed as vulnerable. 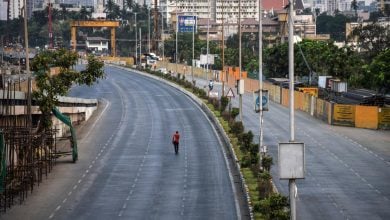