A Spanish waiter is on trial accused of cutting his mother into 1000 pieces, storing her body parts in Tupperware, and eating her. A Spanish waiter is on trial for allegedly slashing his mother into 1000 pieces and eating her with his dog. Alberto Sanchez Gomez, 28, was arrested in February 2019 after police went to the home of his mother, Maria Soledad Gomez, 68, after receiving reports of concern from a friend. Police said they found body parts around the apartment, including some remains in Tupperware.

Gomez said in court on Wednesday he heard voices tell him to kill his mother while he watched TV in their apartment, The Sun reported. He claimed to listen to the voices of neighbors, celebrities, and acquaintances but said he had no recollection of cutting up his mother. When police arrived at the door of the apartment after receiving a report about a missing woman, he allegedly said, “Yes, my mother is here — dead.”

“The dog and I have been eating her bit by bit.

Investigators claimed Maria’s remains were found in containers in the fridge, and bones were hidden in drawers inside the apartment.

The police report claimed the unemployed waiter had strangled his mother after an argument earlier that year.

“The accused then transferred his mother’s body to the bedroom and put it on the bed to make her body disappear. To do that, he cut her up using a carpenter’s saw and two kitchen knives,” the report claims.

“Once he had cut her body up, he would eat bits of it from time to time throughout around a fortnight, putting some of the parts of her body in Tupperware containers around the apartment and in the fridge and throwing others away. In plastic bags.”

Gomez is now facing up to 15 years in prison and has undergone a psychiatric evaluation. The results are expected during the trial.

The prosecution has also requested Gomez compensate his older brother 90,000 euros ($A139,833) if he’s found guilty of homicide and desecrating a corpse.

“I can’t stop thinking about what happened. I’d been ill for a long time, and I took refuge in drugs,” Gomez wrote in a letter from prison, according to The Sun.

“I’d been hearing voices for a long time and having hallucinations.

“All this led me to the worst thing that’s happened in my life.” 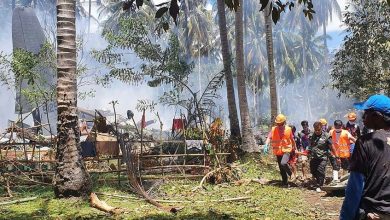