MIAMI (AP) – Erik Spoelstra got a milestone win, and it didn’t come easily.

Jimmy Butler scored 29 points, Bam Adebayo scored 21, and the Miami Heat went on a 17-0 run in the second half before hanging on late to beat the San Antonio Spurs 116-111 on Wednesday night.

Adebayo added 11 rebounds for Miami, which got 18 points from three players – Kendrick Nunn, plus reserves Goran Dragic and Dewayne Dedmon. Dragic had seven assists, giving him 2,004 in his Miami career and tying him with two-time NBA champion Mario Chalmers for third-most in team history.

Dejounte Murray had 22 points, 10 rebounds, and 11 assists for the Spurs without starting guard Derrick White, who is expected to miss the rest of the season with a sprained ankle. DeMar DeRozan scored 20 for the Spurs, who got 18 from Lonnie Walker IV, 13 from Rudy Gay, and 11 from Devin Vassell.

San Antonio led by seven late in the third, but Miami scored the following 17 points – the last two coming to open the fourth — and finished off a two-game season sweep of the Spurs for only the fourth time.

Miami led by 14 early but settled for a 55-54 lead at the half, and that came after Dragic banked in a 3-pointer with one-tenth of a second left. That was one of two nice second-quarter breaks for the Heat, the other coming when a charging call against Adebayo was overturned with 7:53 left and became the third foul on San Antonio’s Jakob Poeltl instead.

The Spurs tried to get a foul assessed to Poeltl overturned with 20.8 seconds left, after he was whistled for making contact with Butler on a 16-footer as the shot clock was winding down and Miami clinging to a three-point lead. But the call held; Butler made both free throws, and Miami held on.

Spurs: Walker, who played for the University of Miami, had managed only 16 points in three previous games against the Heat — and just two in his lone game at Miami as a pro before Wednesday. … The Spurs fell to 18-11 on the road, tied with Denver for second-best in the NBA. Only Phoenix (20-9) is better away from home.

Heat: Spoelstra said that Victor Oladipo (knee) missed his 11th consecutive game, and Tyler Herro (right foot soreness) missed his third in a row but is progressing. “As far as anything structurally (wrong), he’s clear on that,” Spoelstra said. … Miami gets two off days after a game for the first time since not playing on April 9 and 10. … Butler missed his lone 3-point try and is now 0 for his last 11 from beyond the arc.

With Whiteout, Vassell got his second start, and Spurs coach Gregg Popovich said this would fast-track the rookie’s growth. “When he gets minutes, he’s played well,” Popovich said. “When he gets fewer minutes, I think the rookie part comes out where he’s probably more in a little bit of a hurry, probably presses a little bit. … In this situation, he will get more minutes, and so I expect him to develop very well.”

Dedmon needed to change jerseys in the second quarter – not because of sweating, but because of spelling. Dedmon took the court in a jersey bearing the name “DEDMAN” on the back. A new jersey was retrieved, and when Dedmon returned, it was in a top with the correct spelling of his surname. 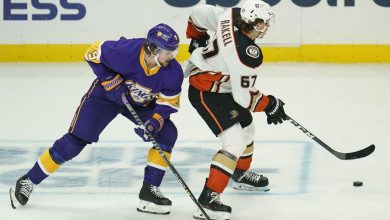 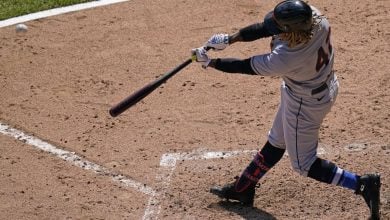 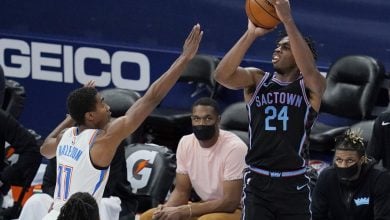 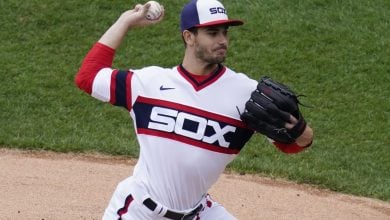