Over the past few weeks, flash mobs have been popping up across China.

Carrying red and yellow flags, groups of singers and musicians have repeatedly broken into renditions of ‘Sing a Folk Song for the Party’ – a 1963 ode to the Communist Party of China, commonly referred to as the CCP – in parks and squares across the country.

But far from impromptu performances, the scripted and heavily managed public demonstrations of patriotic pride are part of a months-long campaign to cement support for the authoritative government ahead of its centenary this week.

On 1 July, the date picked as the anniversary of the party’s formation, it will be roughly 100 years since 12 delegates came together to form a new party that would decades later become one of the longest-ruling political powers in the world. People stand outside a display commemorating the 100th anniversary in Shanghai.

In the century since, China has emerged as a global superpower in a world entirely unrecognisable from when it was formed.

Coinciding with the flash mobs has been a huge gala featuring military displays, performances depicting a whitewashed version of communist history, and messages from Chinese astronauts in space, all set against the backdrop of the COVID-19 pandemic which began more than a year ago in China.

The pandemic was given equal showbiz treatment in the celebrations, reframed as a victory for the party with performers wearing masks and personal protective equipment.

But underneath the jovial statements, some China experts say, is a concerted effort to maintain control of the narrative of the country’s history. 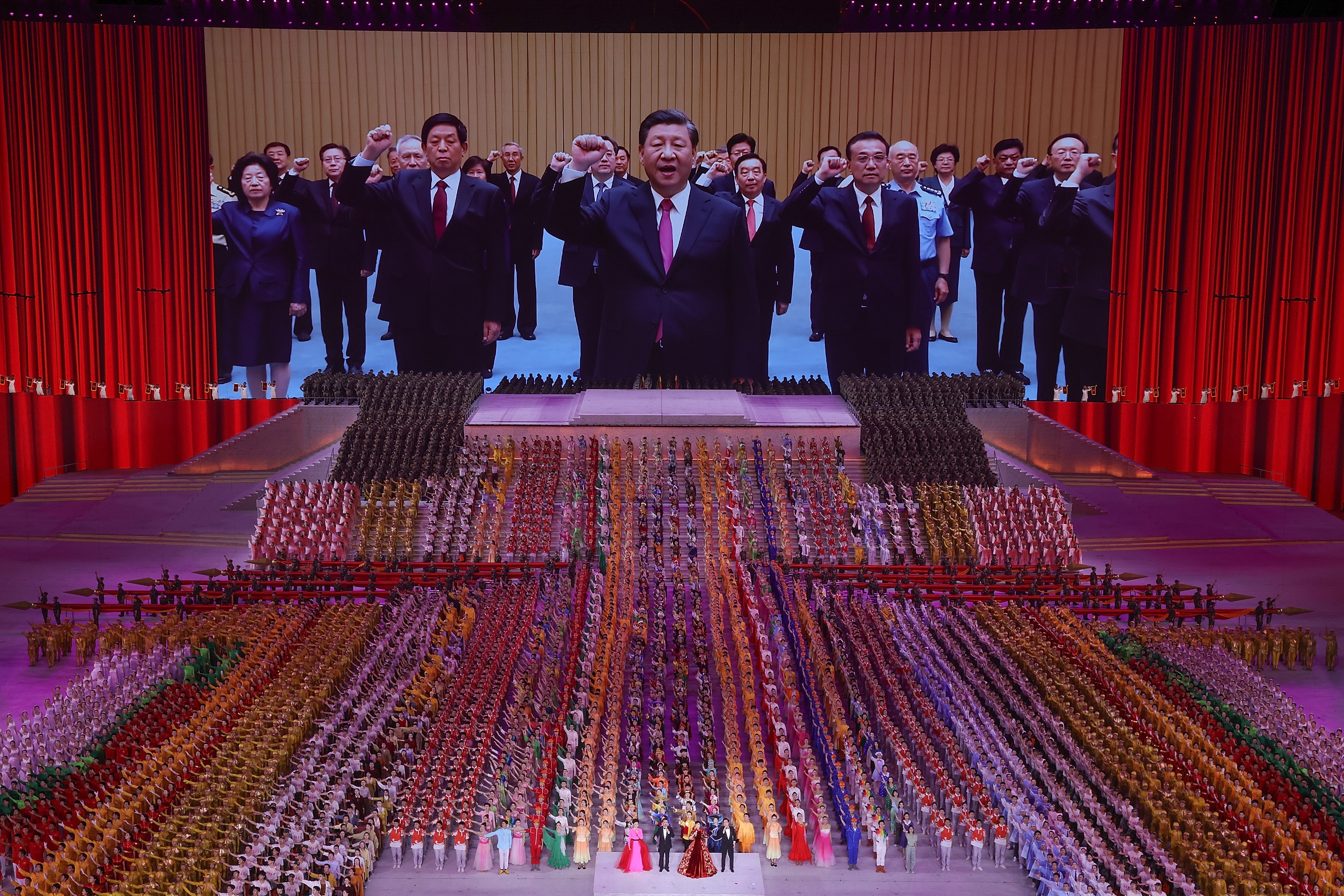 A mass gala celebrating the 100th anniversary in Beijing.

“We won’t see any internal dissent or second-guessing of the party, because the party controls all of the media and means of getting information,” said Michael Shoebridge, director of defence, strategy and national security at the Australian Strategic Policy Institute, a think tank established by the Australian government.

What exactly is the Chinese Communist Party?

The Chinese Communist Party is the sole governing party of the People’s Republic of China and has been so since it took power following a decades-long civil war in 1949.

Unlike Australia’s democratic government, the party is a political monopoly influenced by Marxist-Leninist doctrine.

“The current power of the Chinese Communist Party is an illegitimate government established by force,” said Chongyi Feng, an associate professor of China studies at the University of Technology Sydney. “It’s the power imposed on the Chinese population for 70 years already.”

Despite recent challenges for the party at home and abroad, including the pandemic and international outrage at widespread human rights abuses, it currently has more than 91 million members in a country of almost 1.4 billion.

From the member base, 2,354 delegates are selected to join the Party Congress, which meets yearly to pass laws and assign key leadership positions.

The final decision-making power lies then with the seven-member standing committee and Xi Jinping, the party’s general secretary and president of the People’s Republic of China since 2012.

The 68-year-old leader further consolidated his power in 2018 when the National People’s Congress removed presidential term limits, making Mr Xi president for life – if he wants it – and elevating him to the status of the party’s founder, Chairman Mao Zedong. 100th anniversary celebrations at the Birds Nest in Beijing.

Under Mao, China suffered through a bloody civil war, widespread famine and 36 million deaths caused by a series of agricultural and industrial reforms known as the Great Leap Forward, and a cultural revolution that led to the destruction of much of China’s traditional culture and widespread political persecution.

“What the Chinese Communist Party is trying to do now under Xi Jinping is to revert back to the totalitarian law under Mao,” Dr Feng said.

“The current government is trying to eliminate any current or potential threat to maintain its monopoly on political power in China.”

The significance of 1 July

A century is a significant milestone for any political party, and even more so for an authoritative communist regime.

“In two years’ time, the CCP will match the communist party of the Soviet Union in time and power,” Mr Shoebridge said.

The date itself, 1 July, is not the date the party was founded but a “convenient” anniversary arbitrarily chosen by Mao years later. Its origins actually trace back to 23 July 1921, when a handful of underground members met in Shanghai to set out a new future for the country. People take pictures on the eve of the 100th anniversary in Beijing.

Mr Shoebridge said the longevity of the party’s rule is remarkable and due, in part, to an extensive system of control over its people.

“What they really want to do is make the 1.4 billion people in China associate the party with the people and with the nation, to give them the firm idea that there is no alternative for China besides being ruled by the party,” he said.

“The bigger purpose is to give the Chinese people this idea that the party is delivering the China dream, the jubilation of the great Chinese nation, and to sell that same narrative to the rest of the world.”

To this end, the anniversary has provided an ideal opportunity for the world’s second-largest economy to launch a propaganda push aimed at inspiring a new generation of party loyalists.

In the latest edition of the party’s official history, the Great Chinese Famine is glossed over as a natural disaster and the decades-long turmoil of the Cultural Revolution is reduced to three pages. “China has been developing for so long thanks to the efforts of our forefathers and that generation of Communist Party members,” said one party member, 23-year-old student Li Peng, ahead of the centenary.

“The CCP isn’t dying. It’s a party that’s full of life … now, young people are particularly patriotic and unafraid to speak out.”

The anniversary itself will be the culmination of months of events aimed at educating the population about the party’s official history.

“This [anniversary], Xi Jinping has the opportunity to boast the achievements of the Chinese Communist Party and his own achievement’s as well,” Dr Feng said.

“That’s why you see so many celebrations,” he said, adding that Mr Xi had embarked on a “meticulous” rewriting of China’s history.

The younger generations will be targeted through educational tours and a social media propaganda drive. Schools are also taking part, with students given national flags and told to recite their Communist Youth League Oaths and patriotic songs. A man and child in front of a sign marking the centenery celebrations in Beijing.

Tours of ‘red spots’, which refer to the party’s most important historical sites such as the Communist Party memorial hall in Xibaipo and the city of Yanan (said to be the birthplace of the revolution), have been operating for months.

Meanwhile, an elaborate award ceremony took place in Beijing’s Great Hall of the People on Tuesday, broadcast live in the lead up to the big day.

The ‘July 1 Medal’, announced in 2017 and awarded for the first time this year, honoured 29 members for “outstanding contributions” to the party.

But Mr Shoebridge said the anniversary campaign points to a party deeply “anxious about its control of China”. A Chinese paramilitary police stands guard amid a light show for the anniversary in Shanghai.

Some such as Mr Shoebridge believe the party’s grip on power is closely tied to Mr Xi, who has not chosen a clear successor, warning of deep instability if he were to give up power.

“The CCP’s supreme goal is to stay in power,” he said.

“One of the things that is most dangerous to the Communist Party is the alternative system of governing – called democracy.”

On the Australian Chinese embassy website this week, a statement from ambassador to Australia Cheng Jingye said the centenary “is a major event for both China and the Chinese people”.

“The 100-year history of the CPC has witnessed tremendous transformations of the Chinese nation from standing up, growing rich to becoming strong. It has witnessed the blazing of socialism with Chinese characteristics, a right path for China to prosperity and strength.”

“The centenary only ushers in the prime of life. We have full confidence that under the strong leadership of the CPC, China will realise the great rejuvenation of the Chinese nation.”

More than 2,000 Myanmar anti-coup protesters have been released from jail by the junta

Motorcyclist pulls gun in road-rage incident, gets shot dead by other driver