The number of people forcibly displaced worldwide has doubled in the past decade, reaching its highest level on record according to an annual snapshot by the United Nations’ peak refugee body.

Summary show
That is a near 3 million jump since 2019, marking the ninth consecutive year-on-year increase.
The people behind the numbers
Refugees from Syria at a camp in Suru, Turkey.
“Conflict is the greatest factor forcing people from their homes,” Ms. Steer said.
AP Photo/Fernando Vergara

That is a near 3 million jump since 2019, marking the ninth consecutive year-on-year increase.

“Sadly, we’re seeing record numbers of global displacement, both in terms of refugees – that is, people who are outside their country – and also internally displaced people,” said Naomi Steer, national director of Australia for UNHCR. “We’ve seen over the last decade the number of forcibly displaced people double. That’s an incredible figure.” With one in 95 people worldwide now classified as ‘forcibly displaced’, Ms. Steer believes if such a trajectory continues, “it’s going to be a question of not ‘if’ but ‘when we reach the 100 million mark.”

The people behind the numbers

The majority of those forcibly displaced are internally displaced people, also known as IDPs, who remain within their own country but cannot return home. The UNHCR found 48 million IDPs, with a further 26.4 million refugees, 4.1 million asylum seekers, and 3.9 million Venezuelans displaced abroad. The 74-page report highlighted multiple crises in all corners of the globe, driving the large displacement numbers.

The world’s worst affected nation is Syria, where its devastating civil war has stretched into its 10th year. There are 13.5 million Syrians now displaced, including 6.7m IDPs and 6.8m refugees or asylum seekers.

In South America, Colombia continues to report the highest number of IDPs, with 8.3m people internally displaced at the end of 2020. Neighbouring Venezuela’s long-running political and economic instability and ongoing humanitarian crisis account for 3.9 million of those displaced abroad. A total of 5.4m Venezuelans are either refugees or migrants. In Asia, the persecution of Myanmar’s Rohingya minority means one million people remain in overcrowded camps in neighboring Bangladesh. Refugees from Syria at a camp in Suru, Turkey.

Ethnic conflict is also still widespread in Africa. Violence in Ethiopia displaced 1 million people in 2020 alone, and 500,000 fled abduction and massacre in Mozambique. Ms. Steer says the Democratic Republic of Congo, Somalia, Sudan, South Sudan, and Yemen are other areas of concern in Africa.

“Conflict is the greatest factor forcing people from their homes,” Ms. Steer said.

“But now we’re seeing much more complex situations where climate change, urbanization, poverty, food security, are all coming together to really be a mega-storm, where we’re seeing these huge numbers of people leaving.” The report also found the number of refugees worldwide rose by nearly a quarter of a million by the end of 2020, increasing to almost 20.7 million. More than two-thirds of refugees (68 percent) come from just five countries: Syria (6.7 million), Venezuela (4 million), Afghanistan (2.6 million), South Sudan (2.2 million), and Myanmar (1.1 million). A further 5.7 million Palestinian refugees are categorized separately, falling under the mandate of a separate UN agency that solely supports them. Turkey hosts the most refugees, with the 3.7 million within its borders accounting for 15 percent of all people displaced across borders globally. Colombia (1.7 million refugees) is second, followed by Pakistan (1.4 million), Uganda (1.4 million), and Germany (1.2 million).

Aboriginal sacred sites are being wiped out at Northern Territory mine, Juukan Gorge inquiry hears 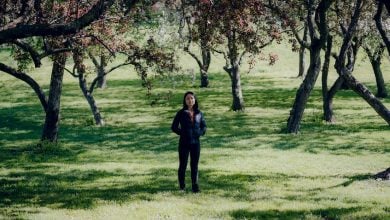