Thousands of Cubans took part in rare protests on Sunday against the communist government, chanting, “Down with the dictatorship,” as President Miguel Diaz-Canel called on his supporters to confront the demonstrators.

The anti-government rallies started spontaneously in several cities as the country endures its worst economic crisis in 30 years, with chronic shortages of electricity and food.

Several hundred protesters marched through the capital Havana chanting, “We want liberty,” with a heavy military and police presence deployed after demonstrators massed outside the Capitol building.

Security forces arrived soon after the protests began, and Mr Diaz-Canel later visited the town himself surrounded by party activists as residents heckled him, according to videos posted online. 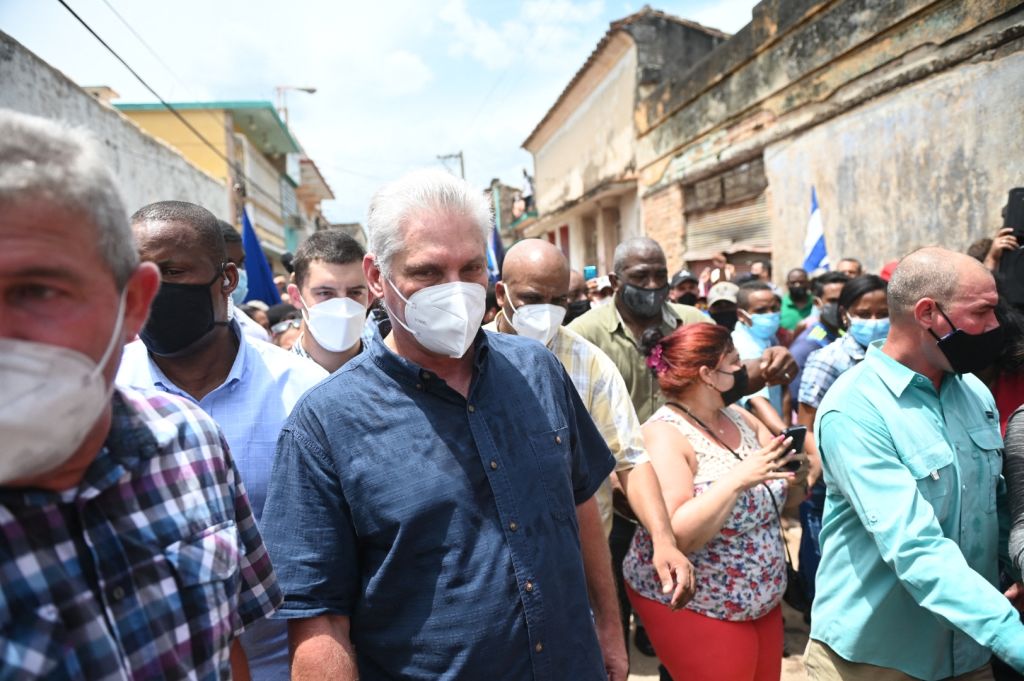 Cuban President Miguel Diaz-Canel is seen during a demonstration held by citizens to demand improvements in the country, in San Antonio de los Banos, Cuba.

The president delivered a combative television address, saying: “The order to fight has been given – into the street, revolutionaries!

“We call on all revolutionaries of the country, all communists, to go out in the streets where these provocations occur… and to face them in a decisive, firm and courageous way.”

Social media showed several anti-government protests around the country, and mobile internet – only introduced in Cuba since 2018 – was largely cut off on Sunday afternoon.

The United States reacted swiftly to the day’s events.

“The US supports freedom of expression and assembly across Cuba, and would strongly condemn any violence or targeting of peaceful protesters who are exercising their universal rights,” US National Security Advisor Jake Sullivan said on Twitter.

One local in San Antonio de los Banos, on condition of anonymity, told AFP that she participated in the demonstration as she was exasperated by “the situation with electricity and food”.

Public anger has been driven by long food lines, worsening power shortages for several hours a day and a critical shortage of medicines since the start of the COVID-19 epidemic, with Cuba under US sanctions.

Cuba is experiencing its toughest phase yet of the coronavirus epidemic, and on Sunday reported a new daily record of infections and deaths. A man injured in the eye is seen during a demonstration against the government of Cuban President Miguel Diaz-Canel in Havana, on 11 July, 2021.

He accused “a Cuban-American mafia” of whipping up the protests on social media.

“People have come to express their dissatisfaction with the situation they are living in,” he acknowledged.

Mr Diaz-Canel has been president since 2018, succeeding Raul Castro, who served as leader after his brother Fidel Castro.

The only authorised gatherings in Cuba are normally Communist Party events.

The country of 11.2 million people was left relatively unscathed in the first months of the COVID-19 outbreak but has seen a recent hike in infections, with a new record of 6,923 daily cases reported Sunday and 47 deaths for a total of 1,537.

“These are alarming numbers which are increasing daily,” said Francisco Duran, head of epidemiology in the health ministry.

Under hashtags such as #SOSCuba, calls for assistance have multiplied on social media, with citizens and music stars alike urging the government to make it possible for much-needed foreign donations to enter the country.

An opposition group called Saturday for the creation of a “humanitarian corridor,” an initiative the government rejected by saying Cuba was not a conflict zone.

Ernesto Soberon, a foreign affairs official, denounced a “campaign” he said sought to “portray an image of total chaos in the country which does not correspond to the situation”.