A woman and a three-year-old girl have been shot in a shocking daylight attack in New York Times Square.

Summary show
A woman and a three-year-old girl have been shot in New York Times Square.
The two victims were rushed to Bellevue Hospital in stable condition.
Both are expected to survive.

A woman and a three-year-old girl have been shot in New York Times Square.

The gunfire erupted in the tourist hotspot just before 5pm on Saturday at West 44th Street and Seventh Ave.

The victims are not related, sources said. It was initially reported they were a mother and daughter.

Law enforcement sources said that the woman was struck in the leg, and the child was hit in the upper torso.

The two victims were rushed to Bellevue Hospital in stable condition.

Streets around Times Square were closed to traffic amid the chaotic aftermath.

Both are expected to survive.

Horrible. What is it going to take?” NYPD Police Benevolent Association tweeted.

When will our leaders admit they have made a mistake? If this doesn’t shock them to reality, what will?”

The suspect has been described as a black male with short dreadlocks, wearing a zip-up red hoodie and a white soccer jersey bearing the number nine.

This article originally appeared in NY Post and was reproduced with permission.

When Rhonda told her son she had a few months to live, they decided ​to make a podcast

Esther Bejarano, one of the last survivors of Auschwitz women’s orchestra dies 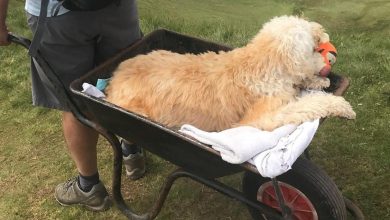 Dog taken up UK mountain in wheelbarrow before dying