Alarming new footage released from the Black Sea reveals a potential new threat as Ukraine’s Russia tensions flare. The Russian navy has reportedly launched a supersonic anti-ship cruise missile in the Black Sea during an exercise coinciding with the first visit by a Legend-class US Coast Guard patrol cutter in 13 years.

The test-firing of the Vulkan missile comes shortly before the arrival of two Royal Navy warships amid mounting tensions in Ukraine over fears of a possible Russian invasion.

Russian authorities said the cruiser Moskva “fired the Vulkan missile from the vessel’s main Basalt missile system for the first time in modern history,” according to East2West News.

Summary show
Naval sources told the outlet that a surface target was hit at 19 miles (30.5km).
Earlier this week, the US Coast Guard cutter Hamilton entered the Black Sea.

Naval sources told the outlet that a surface target was hit at 19 miles (30.5km).

ACCORDING TO THE REPORT, the US condemned Russian authorities for sealing off a large area of the sea with 20 ships and blocking foreign vessels during the launch.

Footage of the drill by the flagship of the Black Sea fleet was released by the Defence Ministry in a show of success — in contrast to a botched launch when a Kalibr missile misfired and almost hit the Marshal Shaposhnikov destroyer in the Sea of Japan.

Earlier this week, the US Coast Guard cutter Hamilton entered the Black Sea.

“The Black Sea Fleet’s Moskva missile cruiser for the first time in recent history fired the Vulkan missile with the ship’s Bazalt main missile system in the waters of the Black Sea,” the Russian Defense Ministry said in a tweet.

“These missiles are the reason why our cruiser is called ‘aircraft carrier-killer’,” a Zvezda correspondent said from the deck during the launch, the Moscow Times reported.

Russia began withdrawing its armed forces that had been running drills near the borders of Ukraine following weeks of heightened tensions between Moscow and the West over the troop build-up.

The Biden administration declared a national emergency on Thursday last week, slapping sanctions on more than three dozen people in Russia and expelling 10 diplomats in an about-face after the US pulled back two warships heading to the Black Sea. President Biden reversed course on the warships just before he announced the fresh sanctions and after Russia warned the US ships to “stay away for their own good.”

Biden on Tuesday had emphasized on a call with Russian President Vladimir Putin “the United States’ unwavering commitment to Ukraine’s sovereignty and territorial integrity,” and “voiced our concerns over the sudden Russian military build-up in Crimea and on Ukraine’s borders, calling on Russia to de-escalate tensions.”

The build-up, which came amid increased fighting between Kyiv’s forces and pro-Russia eastern separatists since the start of the year, raised deep concerns in Ukraine and drew warnings from its Western allies.

“Ukraine calls on its partners to remain vigilant for now, to continue to monitor the situation closely, and to take effective measures to contain Russia,” he said in a statement.

A NATO official said Thursday that any “de-escalation by Russia” is essential, while the United States had said it was “looking for action” on the troop withdrawal. “The movement of Russian troops within Russia is not a threat to anyone,” spokesman Dmitry Peskov told reporters.

Patriots trade up in 2nd round, select Barmore from Alabama

Browns trade up, select ND's Owusu-Koramoah in 2nd round 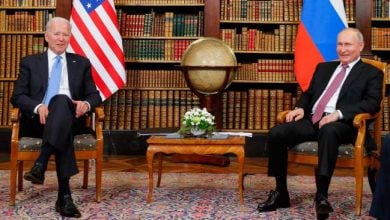 Joe Biden and Vladimir Putin’s summit: Live updates as US and Russia meet in Geneva