Russian tanks, missile trucks and long-range guns have been filmed heading to Crimea and the border of the disputed Ukrainian region of Donbass. There were also reports Mr Putin’s so-called robot army could soon be deployed to the flashpoint border.

Kiev estimates there are now 85,000 Russian troops between 10km and 40km from its frontier and in Crimea. The worrying news comes as British Foreign Secretary Dominic Raab said the UK and the US were “firmly opposed” to Russia’s campaign to destabilise the region.

Ukraine could be ‘provoked’

Ukraine’s government, led by President Volodymyr Zelensky, has accused Moscow of planning to invade Donbass, which has been occupied by Russian-backed separatists since 2014.

And Mr Zelensky has slammed the Kremlin for inciting violence between Ukrainian troops and the pro-Russian rebels in his country. However, Dmitry Kozak, deputy head of Russia’s presidential administration, said Kiev’s leaders were like “children playing with matches”.

Summary show
He chillingly added any “military action … would be the beginning of the end of Ukraine”.
However, Moscow denies its troops are a threat, but says they will remain for as long as it sees fit.

He chillingly added any “military action … would be the beginning of the end of Ukraine”.

Ukraine’s Defence Minister said on Saturday that his country could be “provoked” by Russian aggression pointing the finger of blame firmly at Mr Putin and the Kremlin.

“It should be noted the intensification of the armed aggression of the Russian Federation against Ukraine is possible only if an appropriate political decision is made at the highest level in the Kremlin,” he said.

However, Moscow denies its troops are a threat, but says they will remain for as long as it sees fit.

Britain and the US are “firmly opposed” to Russia’s campaign to destabilise the region and called on Moscow to de-escalate the situation, UK Foreign Secretary Dominic Raab said today.

“(US Secretary of State Antony Blinken) and I agreed Russia must immediately de-escalate the situation and live up to the international commitments that it signed up to at (the Organisation for Security and Co-operation in Europe),” he said in a tweet. And a NATO official told the Reuters news agency that Russia was undermining efforts to reduce tensions in eastern Ukraine. “Allies share their concerns about Russia’s recent large-scale military activities in and around Ukraine,” the unnamed official said. 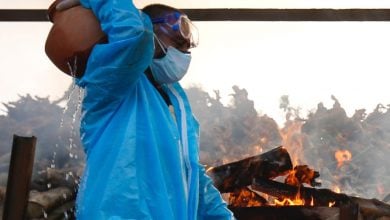