Ultraconservative cleric Ebrahim Raisi was declared the winner Saturday of Iran’s presidential election, a widely anticipated result after many political heavyweights were barred from running.

Mr Raisi won 62 per cent of the vote with about 90 per cent of ballots counted from Friday’s election, poll officials said, without releasing turnout figures, after the three other candidates had conceded defeat.

“I congratulate the people on their choice,” said outgoing moderate President Hassan Rouhani, who has served the maximum of two consecutive four-year terms and leaves office in August.

Mr Raisi, 60, is set to take over at a critical time, as Iran seeks to salvage its tattered nuclear deal with major powers and free itself from punishing US sanctions that have driven a sharp economic downturn.

The head of the Iranian judiciary, whose black turban signifies direct descent from Islam’s Prophet Mohammed, Mr Raisi is seen as close to the 81-year-old supreme leader, Ayatollah Ali Khamenei, who has ultimate political power in Iran. An Iranian voter attends a polling station with a young child to vote during the presidential election in Tehran, Iran, on Friday, 18 June.

Friday’s voting was extended by two hours past the original midnight deadline amid fears of a low turnout of 50 per cent or less.

Many voters chose to stay away after the field of some 600 hopefuls including 40 women had been winnowed down to seven candidates, all men, excluding an ex-president and a former parliament speaker.

Three of the vetted candidates dropped out of the race two days before Friday’s election.

Populist former president Mahmoud Ahmadinejad, one of those barred from running by the Guardian Council of clerics and jurists, said he would not vote, declaring in a video message that “I do not want to have a part in this sin”.

Mr Raisi’s victory was confirmed Saturday when he received the congratulations of the incumbent and the three other candidates – ultraconservatives Mohsen Rezai and Amirhossein Qazizadeh Hashemi and reformist Abdolnasser Hemmati. 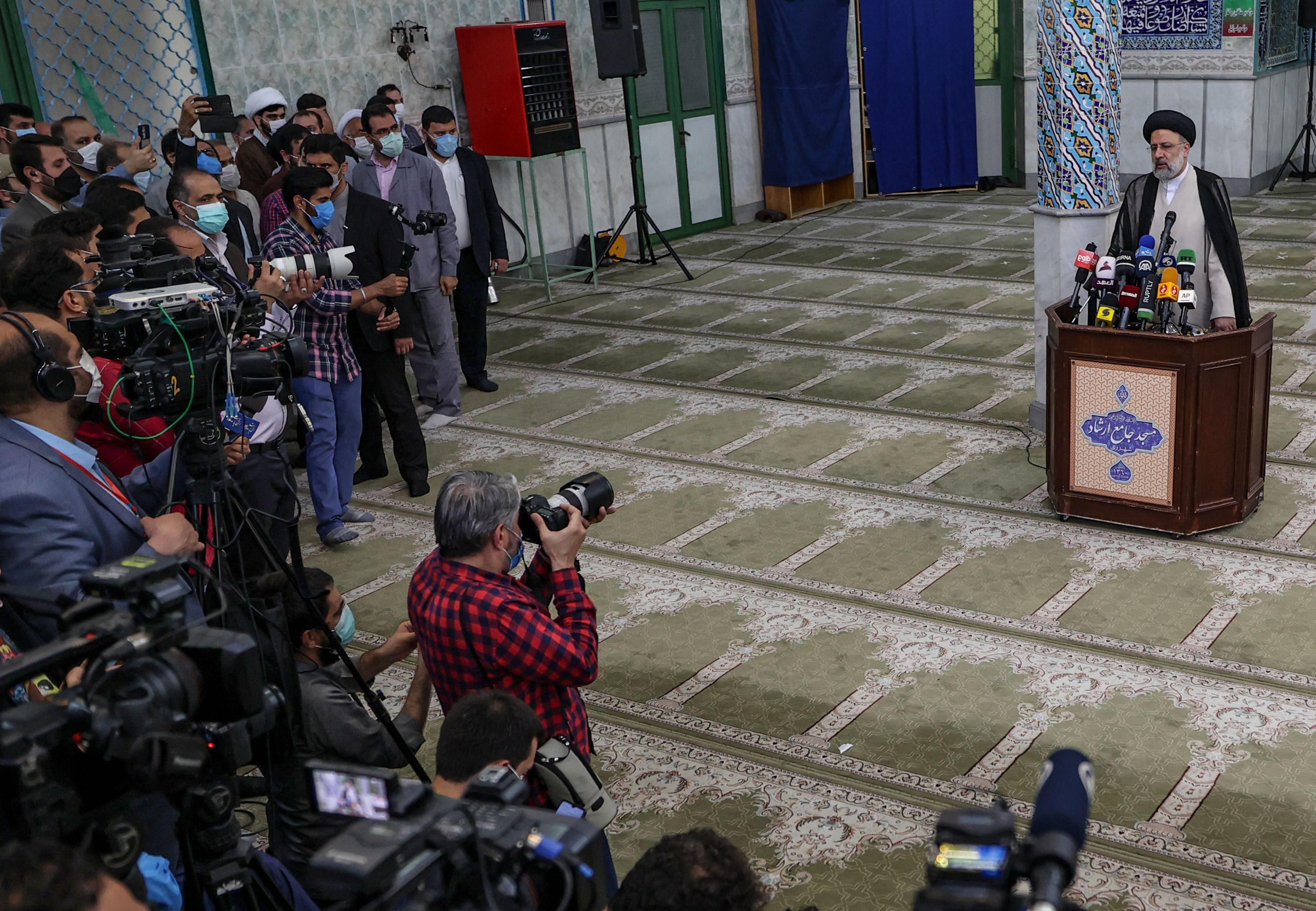 Ebrahim Raisi gives a news conference after voting in the presidential election, at a polling station in the capital Tehran, on 18 June.

On election day, pictures of often flag-waving voters dominated state TV coverage, but away from the polling stations some voiced anger at what they saw as a stage-managed election aiming to cement ultraconservative control.

“Whether I vote or not, someone has already been elected,” scoffed Tehran shopkeeper Saeed Zareie. “They organise the elections for the media.”

Enthusiasm was dampened further by spiralling inflation and job losses, and the COVID-19 pandemic that proved more deadly in Iran than anywhere else in the region, killing more than 80,000 people by the official count.

Among those who queued to vote at schools, mosques and community centres, many said they supported Mr Raisi, who has promised to fight corruption, help the poor and build millions of flats for low-income families. Two Iranian women check their ID papers to cast their votes at a polling station during the presidential election in Tehran, Iran.

A nurse named Sahebiyan said she backed him for his anti-graft credentials and on hopes he would “move the country forward… and save the people from economic, cultural and social deprivation”.

Mr Raisi, who holds deeply conservative views on many social issues including the role of women in public life, has been named in Iranian media as a possible successor to Mr Khamenei.

To opposition and human rights groups, his name is linked to the mass execution of political prisoners in 1988. The US government has sanctioned him over the purge, in which Mr Raisi has denied playing a part.

Asked in 2018 and again last year about the executions, Mr Raisi denied playing a role, even as he lauded an order he said was handed down by the Islamic republic’s founder Ayatollah Ruhollah Khomeini to proceed with the purge.

‘Ultimate power in Iran, since its 1979 revolution toppled the US-backed monarchy, rests with the supreme leader, but the president wields major influence in areas from industrial policy to foreign affairs.

Mr Rouhani’s landmark achievement was the 2015 deal with world powers under which Iran agreed to limit its nuclear programme in return for sanctions relief.

But high hopes for greater prosperity were crushed in 2018 when then-president Donald Trump withdrew the United States from the accord and launched a “maximum pressure” campaign against Iran.

While Iran has always denied seeking a nuclear weapon, Mr Trump charged it was still planning to build the bomb and destabilising the Middle East through proxy groups in Iraq, Lebanon, Syria and Yemen.

As old and new US sanctions hit Iran, trade dried up and foreign companies bolted. The economy nosedived and spiralling prices fuelled repeated bouts of social unrest which were put down by security forces.

Iran’s ultraconservative camp – which deeply distrusts the United States, labelled the “Great Satan” or the “Global Arrogance” in the Islamic republic – attacked Mr Rouhani over the failing deal.

Despite this, Iran’s senior political figures, including Mr Raisi, have voiced broad agreement that the country must seek an end to the US sanctions in ongoing talks in Vienna aimed at rescuing the nuclear accord.