India set a new global record of the most number of COVID-19 infections in a day, as Prime Minister Narendra Modi on Sunday urged all citizens to be vaccinated and exercise caution, saying the “storm” of infections had shaken the country.

“The United States is working around the clock to deploy available resources and supplies,” National Security Council spokeswoman Emily Horne said in a statement.

Just as India sent assistance to the United States as our hospitals were strained early in the pandemic, we are determined to help India in its time of need. https://t.co/SzWRj0eP3y

Washington was under mounting pressure to help India, the world’s largest democracy, after Britain, France and Germany pledged aid over the weekend.

“That’s something that certainly is going to be actively considered,” Dr Fauci said in an interview.

AstraZeneca’s vaccine is not yet approved in the United States, which has millions of doses, and top US health officials have said they have enough doses of approved versions by three other drugmakers to inoculate all Americans in coming weeks. The nation’s top business lobbying group has also pushed the administration to send AstraZeneca’s vials to countries with rising cases.

The White House had no comment on the possibility of sending AstraZeneca vaccine to India. A COVID-19 patient receives oxygen inside a car provided by a Gurdwara, a Sikh house of worship, in New Delhi, India, Saturday, 24 April, 2021.

The northern megacity – home to 20 million people and the worst hit in India – had imposed a week-long lockdown on Monday.

“We have decided to extend the lockdown by one week,” Delhi Chief Minister Arvind Kejriwal said.

“The havoc of corona(virus) continues and there is no respite.”

VIDEO: 🇮🇳 An overcrowded Covid-19 ward in a #NewDelhi hospital where two or three patients share a single bed, with barely enough space for others to stand. India’s daily coronavirus death toll has hit a new record of 2,624 as the government battles to get oxygen to hospitals pic.twitter.com/pcBLJ7ScxQ

Hospitals in New Delhi have gone to the city’s high court this week seeking it to order the state and federal governments to make emergency arrangements for medical supplies, mainly oxygen.

“It’s a tsunami. How are we trying to build capacity?” the Delhi high court asked the state and federal governments in response to this plea.

India’s number of cases surged by 349,691 in the past 24 hours, the fourth straight day of record peaks, and hospitals in Delhi and across the country are turning away patients after running out of medical oxygen and beds.

“We were confident, our spirits were up after successfully tackling the first wave, but this storm has shaken the nation,” Mr Modi said in a radio address. Multiple funeral pyres are seen of people who died of COVID-19 in New Delhi.

Mr Modi’s government has faced criticism that it let its guard down, allowed big religious and political gatherings to take place when India’s cases plummeted to below 10,000 a day and did not plan on building up the healthcare systems.

Hospitals and doctors have put out urgent notices that they were unable to cope with the rush of patients.

People were arranging stretchers and oxygen cylinders outside hospitals as they desperately pleaded for authorities to take patients in, Reuters photographers said.

“Every day, it the same situation, we are left with two hours of oxygen, we only get assurances from the authorities,” one doctor said on television.

Outside a Sikh temple in Ghaziabad city on the outskirts of Delhi the street resembled an emergency ward of a hospital, but crammed with cars carrying COVID-19 patients gasping for breath as they were hooked up to hand-held oxygen tanks. 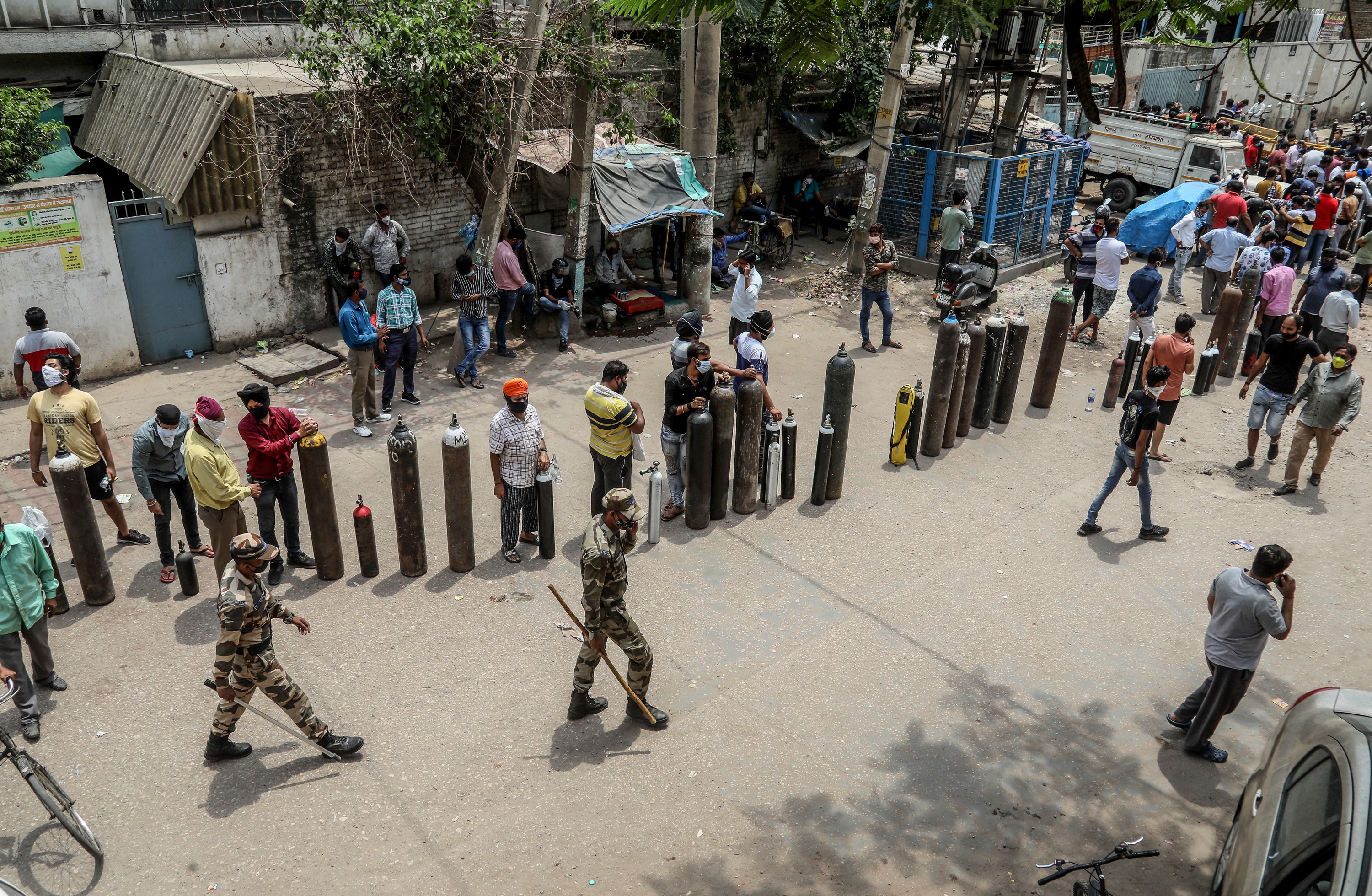 Delhi’s Chief Minister Arvind Kejriwal extended a lockdown in the capital that was due to end on Monday for a week to try and stem the transmission of the virus which is killing one person every four minutes.

“A lockdown was the last weapon we had to deal with the coronavirus but with cases rising so quickly we had to use this weapon,” he said.

In the last month alone, daily cases have gone up eight times and deaths by 10 times. Health experts say the death count is probably far higher.

The country of 1.3 billion people is on the brink of a humanitarian catastrophe, Ashish Jha, dean of the Brown University School of Public Health, warned in an op-ed published Saturday in the Washington Post.

“Our hearts go out to the Indian people in the midst of the horrific COVID-19 outbreak,” US Secretary of State Anthony Blinken said on Twitter.

“We are working closely with our partners in the Indian government, and we will rapidly deploy additional support to the people of India and India’s health care heroes.”

Our hearts go out to the Indian people in the midst of the horrific COVID-19 outbreak. We are working closely with our partners in the Indian government, and we will rapidly deploy additional support to the people of India and India’s health care heroes.

German Chancellor Angela Merkel expressed her “sympathy on the terrible suffering” that the pandemic had brought to India, her chief spokesman Steffen Seibert said in a statement.

“Germany stands in solidarity with India and is urgently preparing a mission of support.”

Other European nations, including France, Britain and Italy have also pledged help. 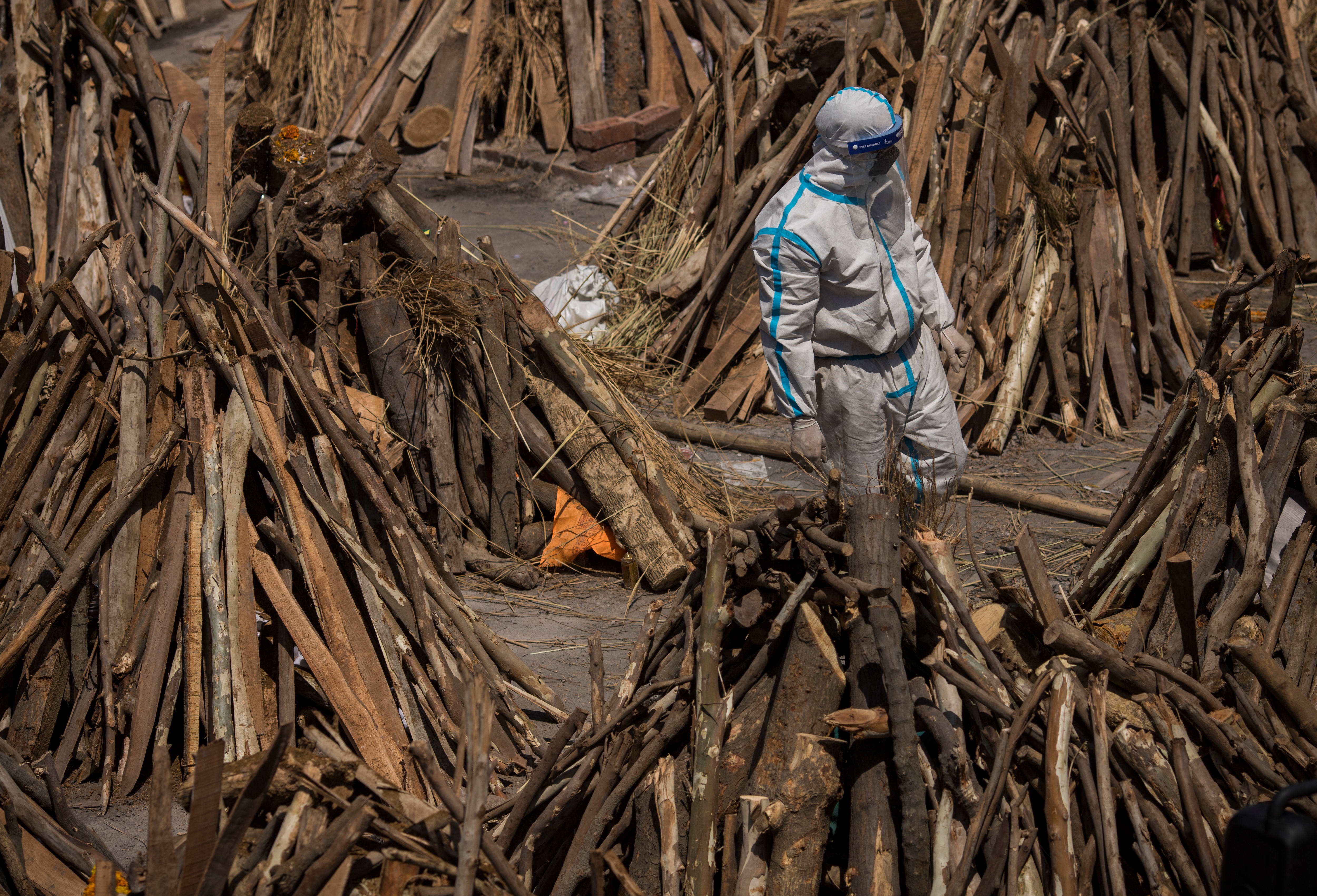 A man is seen amid funeral pyres before they are lit to perform the last rites of patients who died of COVID-19, at a New Delhi crematorium on 24 April.

Neighbouring Bangladesh, which shares a 4,000-kilometre border with India, will halt land crossings for two weeks from Monday.

India’s surge is expected to peak in mid-May with the daily count of infections reaching half a million, the Indian Express said citing an internal government assessment.

V.K. Paul, a COVID-task force leader, made the presentation during a meeting with Mr Modi and state chief ministers and said that the health infrastructure in heavily populated states is not adequate enough to cope, according to the newspaper.

Dr Paul did not respond to a Reuters request for comment.