GP clinics are already being inundated as those under the age of 40 request bookings for the AstraZeneca vaccine, following changes announced by Prime Minister Scott Morrison.

Doctors were blindsided by Mr Morrison’s Monday announcement that the Commonwealth would provide GPs with indemnity cover so they could administer AstraZeneca to all adults, regardless of age.

Under the change, any adult willing to talk it through with their doctor could therefore get the AstraZeneca jab.

Health Minister Greg Hunt said the medical advice had not changed – AstraZeneca remained the preferred vaccine for people aged over 60 and Pfizer was recommended for those under 60.

He argued the only change was making AstraZeneca available in more locations.

But state premiers were reluctant to endorse the decision, and social media with awash with confusion on Tuesday as some users reported being able to successfully book in for an appointment while others did not have as much luck.

Dr Anita Muñoz said the impact was already being felt at her GP clinic in Melbourne’s CBD, which had gone from having vaccine bookings at 25 per cent capacity for the day, to being fully booked.

“So people are responding to that. And we know that there are already a lot of people in the community that were really quite eager to get protected (against COVID-19) as soon as possible,” she told SBS News.

“Provided that people can access the information that matters to them, they can achieve informed consent, and now there is an insurance scheme that protects patients, I think that means we can get many more people protected much more quickly.”

Canberra journalist Clare Armstrong said she had no issues in booking an appointment for Tuesday.

“I called a local GP clinic taking part in the rollout, they had heaps and heaps of available appointments and were happy to sign me up for quick consult and the jab,” she wrote on Twitter.

Just booked myself an AstraZeneca vaccine appointment at midday today in Canberra!!!! I called a local GP clinic taking part in the rollout, they had heaps and heaps of available appointments and were happy to sign me up for quick consult and the jab 😬😬😬

But SBS News received reports that a number of GP clinics in Sydney had rebuffed requests for a AstraZeneca booking from those under 40, saying they are prioritising Australians aged 60 and over.

“We are still clarifying the medicolegal situation for GPs giving AstraZeneca vaccine to younger people if something goes wrong,” she wrote in a statement on Twitter.

“As I understand it, medical indemnity plan is not yet in place and will not be a blanket indemnity.”

We are still clarifying the medicolegal situation for GPs giving AstraZeneca vaccine to younger people if something goes wrong.
As I understand it, medical indemnity plan is not yet in place and will not be a blanket indemnity

Dr Muñoz, who is also chair of Royal Australian College of General Practitioners Victoria, said she was not surprised that GP clinics were taking time to assess the impact on their practice.

“It may well take a practice days or weeks to make a decision about acting on this new set of criteria for  AstraZeneca – and that is okay. That means they are thinking about it and taking it seriously.”

She said there is a need for the federal government to be clear in its messaging to reduce patient confusion.

“I think it is important from the patient’s point of view that the government provides clear, simple messaging at a national level, through a national advertising campaign to support the patient side of things,” she said.

“With all of the changing information, there are different questions. And there can be a sense of confusion and uncertainty. And if we’re going to be successful with this program, then we need a really constant and definite, simple message from the government to support people making their decisions.”

Queensland Premier Annastacia Palaszczuk believes governments should follow the advice of an expert panel known as ATAGI, which recommended AstraZeneca only be given to people aged over 60.

NSW Premier Gladys Berejiklian was also lukewarm about the shift in position on Tuesday.

She confirmed the change was discussed at national cabinet and would be followed in NSW, but barely endorsed the policy.

Victorian Health Minister Martin Foley insisted the AstraZeneca call was not a decision of national cabinet.

His department has written to the federal government seeking further advice. 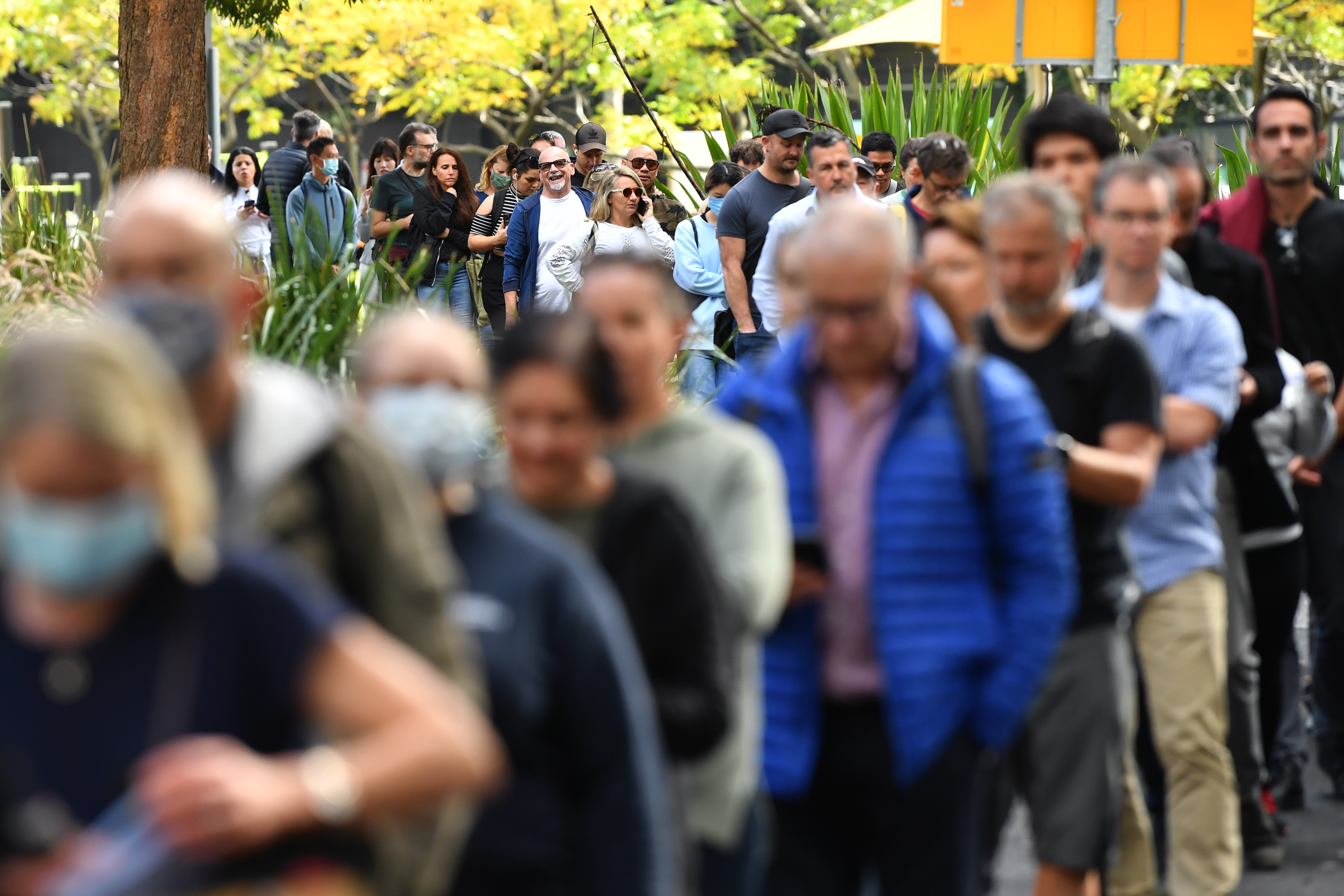 Members of the public wait in line at a mass COVID-19 vaccination hub in Sydney on Monday, 24 May, 2021.

The head of the Australian Medical Association, meanwhile, was given no notice of the decision to AstraZeneca available to all adults.

“Our recommendation is still really for patients to follow the ATAGI advice,” Omar Khorshid told The Guardian.

“Be patient and have the ATAGI-recommended vaccine when it’s available. I’m certainly still backing the expert advice at this stage.”

Dr Muñoz encouraged patients to talk to their GPs for “tailored advice” on their situation.

“There will be people who continue to have questions and uncertainties. And I think the best thing we can do is sit down and have discussions one on one with people, so you can tailor the information to what matters to them.”

“(Go to a GP) rather than rely on less trustworthy sources that may not present the entire panorama of truths about this. Because we want people to be protected from what is a really deadly disease.

“Particularly this Delta strain, it is frightening me to think that that could enter the country and that we have a largely unvaccinated population. I think that would be devastating.”

Barnaby Joyce defends cabinet reshuffle, says his fine for not wearing a mask is a 'message for everyone'